In what’s been the worst-kept secret thanks to a number of leaks, including photographs of the new player, streaming media device maker Roku is at last officially announcing the launch of its latest product, the Roku 4. The updated hardware is now designed to support both 4K Ultra HD and HD TVs, and includes a faster processor, better Wi-Fi, more memory, optical audio out, and more.

Notably, it will also run Roku’s upgraded operating system, Roku OS 7, which is focused on helping users discover and follow their favorite content across Roku’s more than 3,000 apps and channels.

Also new today is an updated Roku mobile app featuring a refreshed design that makes it easier for customers to use Roku’s features, including Search, the Roku Feed and remote control functionality, right from their smartphones. 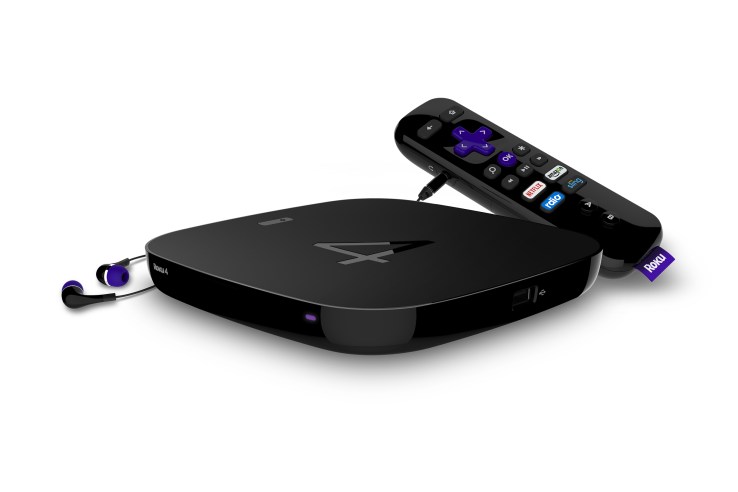 The Roku 4’s launch is a significant one in the rapidly heating-up connected player market, where companies including Apple, Google, Amazon, TiVo and others offer their own streaming media devices – sometimes several – for consumers to choose from, ranging from low-cost dongles like Chromecast or Fire TV Stick to higher-end players like the newly refreshed Apple TV.

Amazon recently even upped the stakes even more, by banning sales of Apple TV and Chromecast from its site. And TiVo just rolled out a new streaming player and DVR called TiVo BOLT, which is designed for 4K video and offers a clever commercial-skipping feature.

But for a number of consumers, Roku’s position as an independent third party trying to support all the popular streaming services, even niche offerings, has been its biggest advantage.

So when it came time to upgrade its player, the company focused on hardware improvements that would support newer 4K TVs, combined with software upgrades that would help make finding 4K content, and other things, easier than before. 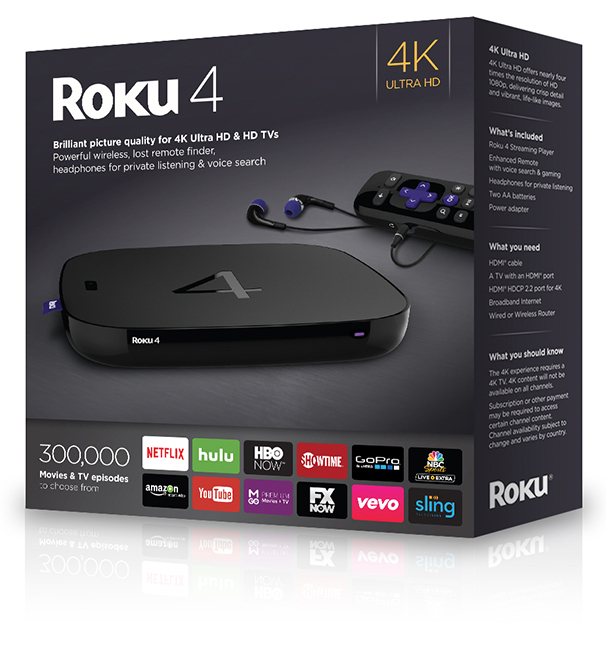 In terms of the device itself, the new Roku 4 has a wider footprint to make room for its upgraded internals, which include a faster quad-core processor, improved Wi-Fi, a new audio port, additional memory, and more.

The box has seen a sizable increase in RAM, as well. Roku did confirm the specs previously being circulated online which had pointed to 1.5 GB of RAM for Roku 4 versus the 512 MB in Roku 3. (The specs were pulled from a developer’s guide that was briefly available via Roku.com before being pulled down. Roku wasn’t planning on offering a full hardware spec list, however.)

Meanwhile, the player supports the usual collection of inputs and outputs including HDMI, USB, Micro SD, and Ethernet, but has now added Optical Audio Out, which will allow users to plug their Rokus into their stereo systems or sound bars. (For those who need this option, this is an advantage over Amazon’s new 4K Fire TV, which recently dropped support for optical.)

Also new is the “Remote Finder” button. By pressing a button on the top of the Roku 4 box, the remote will beep to help you dig it up from where it’s buried in your couch cushions. You can also customize the sounds this feature uses.

A “reset” button on the bottom of the device, also previously spotted via the FCC filing, is also now available.

In addition, many of Roku’s other features have carried over to the new product, including its remote control that offers a headphone jack for private listening and motion control for casual gaming. 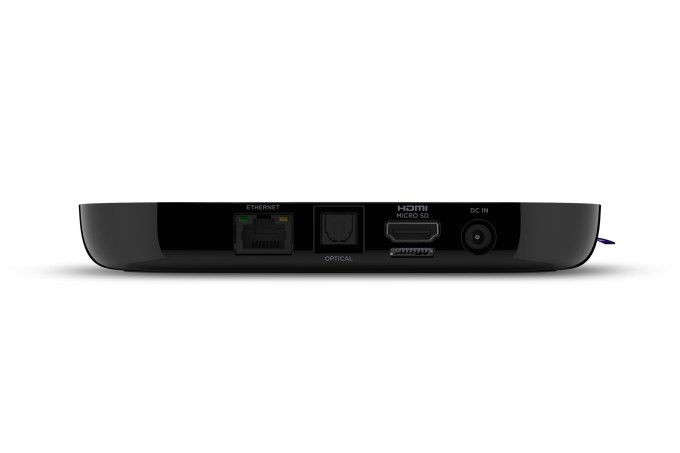 But for the end user, what these improved components translate to is an overall improved experience on the Roku. That starts with a crisper, clearer user interface that’s been upgraded to 1080p, as well as support for up to 4K Ultra HD.

“When we say ‘4K’ we mean full 60 frames per second,” explains Lloyd Klarke, Roku’s director of product management. “We mean full support for HDCP 2.2, which is the security protocol that makes sure 4K stays true all the way through. It’s 4K done right.”

Of course, Roku 4 works with standard HD as well, though consumers not planning to upgrade to a 4K television any time soon may find fewer reasons to run out and purchase the pricier ($129.99 MSRP) player. 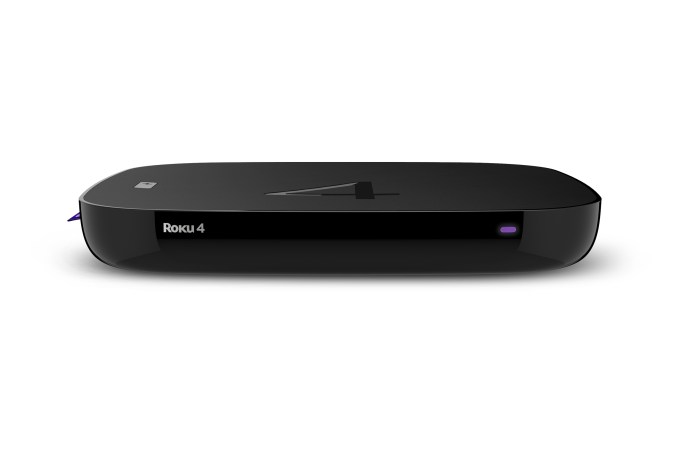 The Roku OS 7 software update both complements the hardware improvements by making it easier for those with 4K TVs to actually find 4K videos, but it also introduces a number of other new ways to find and follow content from Roku’s growing selection of channels.

While the company previously rolled out features like universal search and the Roku Feed, which helps you track movies coming soon, the new OS expands the ability to follow content to go beyond movies to also include the ability to find and follow favorite TV shows, actors and directors.

When new content arrives, users are notified right on their “My Feed” section on the homescreen, which also now shows the number of new updates waiting for you. 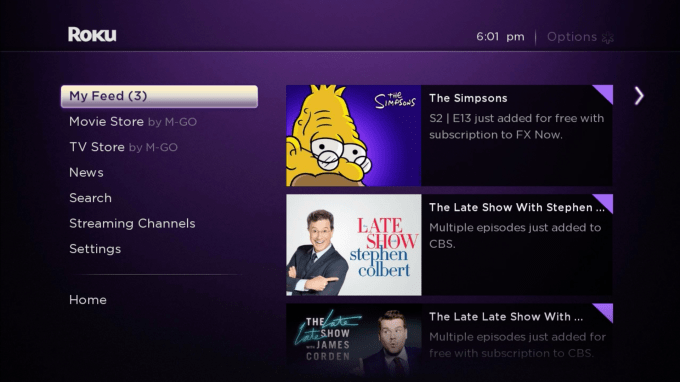 Sharad Sundaresan, Roku’s senior vice president of product management, tells us this feature has been smartly designed so it doesn’t inundate your feed each time you have a new update. Instead, things are grouped together, when appropriate – like when there are multiple episodes of a show you’re tracking, for example. In that case, these would all be grouped as a single update, not several. (Review units are not available until later this month, so we can’t speak to promised functionality vs. real-world results at this point, however.)

This will be especially helpful in the growing world of cord-cutting where people follow programs they like, not the network or service it lives on. The addition is also competitive, to some extent, with TiVo’s “OnePass” feature, which aims to make it easier to track favorite programs across services. 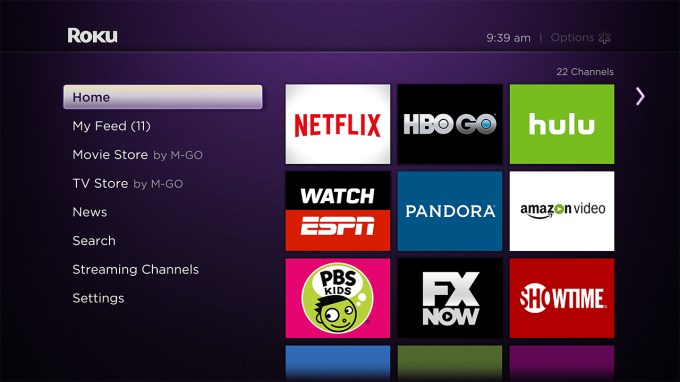 More importantly, perhaps, in light of Roku 4’s support for 4K TVs, are a number of new features designed to surface 4K video.

For starters, there’s now a “4K” row in the Channel Store which will highlight all the channels Roku offers that support 4K, including Netflix, M-Go, Amazon Instant Video, YouTube, VUDU, and ToonGoogles. That’s a larger lineup than other streaming players have at launch, it should be noted.

There’s also a curated 4K Spotlight channel exclusive to Roku 4 on users’ homescreens that includes a selection of TV shows, movies, clips and more. There are even 4K themes and screen savers which let users customize their Roku with scenic pictures and other images, and then pair those with matching “Remote Finder” sounds like Star Trek, kittens, Zen and more.

Though the new software will ship on Roku 4, all of Roku’s current players from 2011 and on will also be able to install the update when it arrives in mid to late October.

Alongside the launch of the Roku 4 and Roku OS 7, the Roku iOS and Android app is getting an overhaul, too. The interface has been improved to better control the Roku from your mobile device, including the ability to interact with key features like Roku Search, Roku Feed, Remote Control and Play.

In the new app, users can access Voice Search, view and add items to their Roku Feed, launch Play on Roku to see their own photos and videos on their TV – even zooming in on the photos on the phone to see the same on the television screen – and more.

4K customers can use the updated app to create their own personalized screen savers that will play when the player is idle. 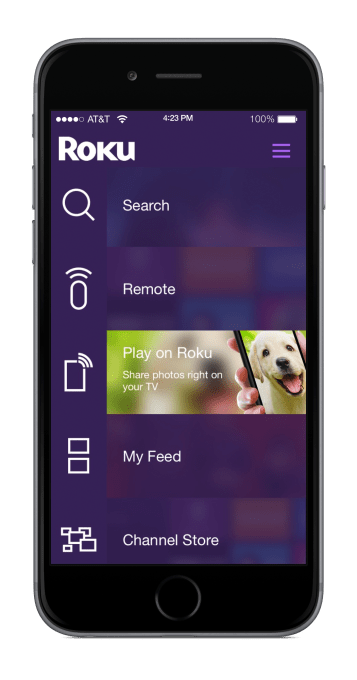 Another new feature is the ability for Roku 4 to connect to “special” Wi-Fi networks – like those found in hotel rooms and sometimes dorms, where authentication is required. Now users will be able to connect using their mobile or desktop browser, which will help those who travel with their Roku as well as college students who want to use a Roku in the dorm.

The current app works when you’re on the same network as your Roku, but Sundaresan says support for an “untethered” experience is arriving in the new version.

“You can take the Roku app and use it anywhere you want without being close to a Roku,” he says. “So if you’re out at lunch and somebody tells you of a great TV show, you can quickly open your Roku mobile app and tap ‘follow’ and add that show to the list of things you’re following.”

While the app itself appears to offer a better design – even if it’s still quite purple – the platform as a whole doesn’t offer a smart assistant like Apple’s Siri, for example, to aid with voice searches. As this is still a relatively new addition for streaming devices for now, it’s less of a reason to forgo a Roku if you’re happy with its other features, but the omission could become more troublesome over time. (Perhaps Microsoft should license Cortana to Roku?)

The updated mobile app (iOS and Android) will roll out at the same time as the new player, in mid-October, and the untethered feature will ship soon after.

The device is available for pre-order starting today at www.roku.com for $129.99.