DVR maker TiVo today is announcing the latest addition to its Series 6 lineup of players with the arrival of the TiVo BOLT.

The BOLT is a uniquely designed, all-white player offering 4K support as well as a revamped user interface that introduces new features like the ability to skip commercial breaks on recorded content as well as the ability to speed up playback 30 percent faster while listening to pitch-corrected audio.

The most dramatic thing about the BOLT, at first glance, is the updated hardware design. Instead of a standard black box as TiVo has offered in the past, the new player is white, with a somewhat odd curve to it that initially takes some getting used to. Gone, too, are the hardware buttons in favor of integrated lights which makes the player feel more modern than the cable company DVRs it competes with.

The design itself is not only an aesthetic choice – the company says the gentle curve that lifts part of the player up also helps with heat dissipation. That’s useful given the hardware’s upgraded internals, which include a CPU that’s three and half times as fast as the older Roamio model and three times the memory.

These upgrades don’t just make the TiVo BOLT perform better, but also aid with the newly added support for 4K video as well as the player’s now built-in transcoding functionality – another improvement over the Roamio-S.  The new BOLT will replace that device TiVo’s entry-level DVR. Like the Roamio-S, the TiVo BOLT will also come with a 500 GB hard drive, though a 1 TB drive option will be available, too.

The other Roamio models, including the Plus (the 6-tuner, 1 TB Roamio model) and Pro (the 6-tuner, 3 TB model) won’t immediately disappear, however. The Plus will remain in the market for a while and will “eventually” be replaced by BOLT. But the Pro, by nature of its larger capacity that doesn’t yet have a BOLT counterpart, will stick around for the time being.

Of course, although TiVo wouldn’t confirm this, it seems likely that the Pro will also be phased out further down the road, as having a somewhat fractured product lineup could cause consumer confusion.

The BOLT device itself is smaller than earlier Roamio models – 33 percent smaller than the Roamio and 65 percent smaller than the Roamio Plus and Pro. It includes support for both over-the-top streaming services, over-the-air recordings from antennas, and support for recording from cable TV. That makes it a decent option for both cord cutters and cable subscribers alike, assuming they’re in the market for an all-in-one device like the TiVo.

Inside, TiVo has stuck with spinning disk drives, to keep the cost down, the commonly says. 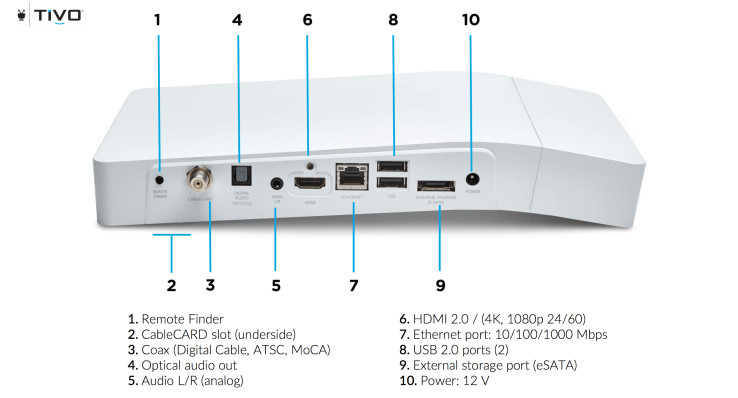 The TiVo remote has also had a bit of an upgrade. While it still feels cluttered with buttons like the remotes that often come with cable companies’ DVRs, it now has a white design and buttons for new features like “SkipMode,” a commercial skipping feature that’s activated by pressing the green “D” button, and “QuickMode,” the sped-up playback which is engaged by pressing the “Play” button followed by the “Select” button.

A handy feature is a “lost remote” finding function that lets you press a button on the back of the TiVo itself in order to locate a missing remote control by way of an audio sound. And the remote offers RF technology to eliminate the need of pointing it directly at the TiVo unit in order for it to work. 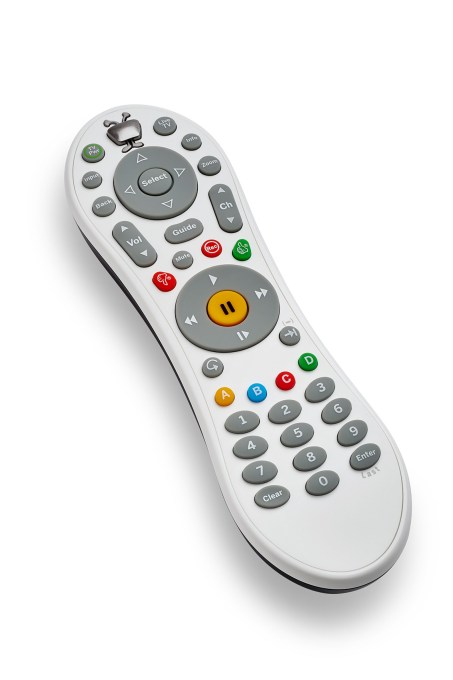 The remote doesn’t include voice support like Apple TV and Amazon’s Fire TV now do, but the BOLT itself is shipping with Bluetooth that’s not yet turned on. That hints at a future remote hardware upgrade that could introduce a voice option.

The TiVo BOLT software, meanwhile, has also been refreshed. For those familiar with TiVo’s look-and-feel, this isn’t so much of a radical upgrade but more of an iterative one. There are some different colors used for certain on-screen navigational elements, flatter icons that complement the more modern design of the new unit, and channel logos now appear in the guide, for example.

What’s more notable about the BOLT’s software is its support for 4K, including in Netflix and YouTube apps, faster application launch times, and the new QuickMode and SkipMode features. 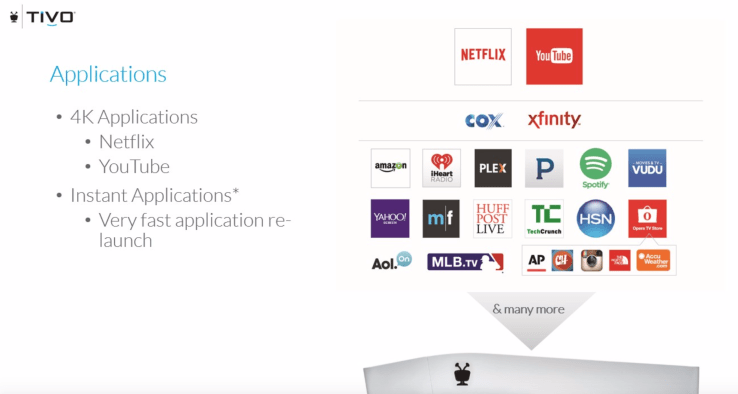 In addition, thanks to the more powerful hardware, apps on the TiVo BOLT can launch and resume a lot faster than before. For example, apps on Roamio would sometimes take around 10 to 15 seconds at startup, but now they take 5 to 7 seconds on BOLT. Plus, the BOLT is the only TiVo player that actually suspends the app in memory to allow for faster resumes.

TiVo continues to focus on its larger strategy of allowing viewers to find, subscribe and watch content across a variety of sources, whether that’s DVR recordings, programs on streaming services like Amazon and Netflix, or videos on YouTube. (Unfortunately, Hulu is absent from the collection of apps while TiVo waits for the company to transition to HTML5 from Flash.) 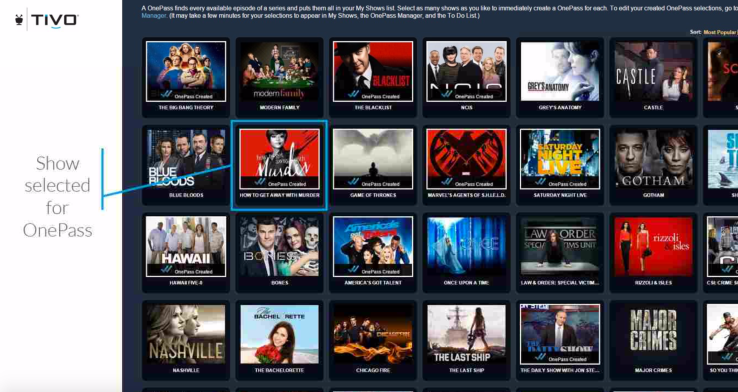 BOLT also still offers TiVo’s “OnePass” technology that lets you instantly subscribe to shows, no matter where all those episodes are located. It’s even improving this experience for new users with a “OnePass QuickSelect” feature that will point new subscribers via their welcome email to a page of popular shows they can subscribe to with a click.

As noted above, the other big additions for BOLT are the QuickMode and SkipMode features. The former was actually suggested three years ago by a TiVo engineer but never made it to production. Essentially, it’s an option that’s best used to speed up content like news or sports where you’re trying to get information, but not necessarily looking for the traditional, lean-back TV watching experience.

Instead, QuickMode lets you watch 30 percent faster, with pitch-corrected audio.

With SkipMode, on the other hand, TiVo is actually tagging content in a way that allows users to push a button once to move to the next part of the program without having to view commercials. This feature is live on 20 popular channels, but currently only for primetime programming (4 PM to midnight, including repeats and late-night talk shows.) Using SkipMode doesn’t interfere with the option to use other playback functions like fast forward or rewind.

SkipMode will be a BOLT-only feature, but QuickMode will roll out to other Roamio models as a software update later this year.

The BOLT’s integrated content streaming – meaning its ability to stream to computers, phones and tablets – is limited at launch. Initially, users will only be able to view one stream in the home until November 2015 when support for two streams is added. Web streaming and in-home downloads work at launch as well, but out of home downloads and streaming won’t ship until 2016 (the latter will only offer one stream, and arrives in the first half of next year).

The final part of the TiVo BOLT upgrade is the updated mobile app. First available on iOS in early November, with Android to follow, the new app is focused on offering users a more personalized experience. Instead of configuring user profiles, like on Netflix, customizations are per device and now include the ability for users to track their hobbies and interests in addition to genres and an expanded list of collections. 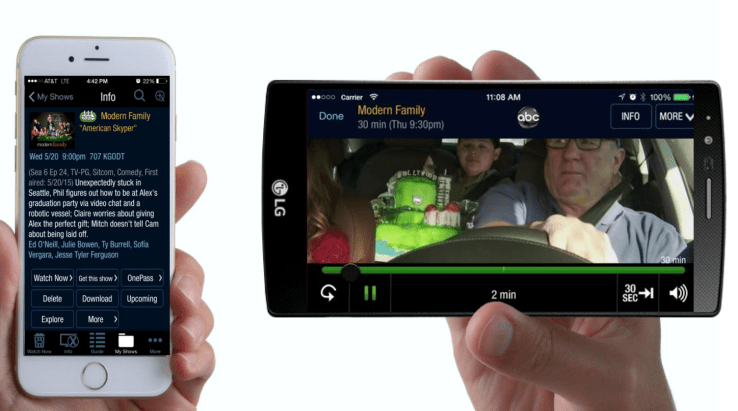 To get started, users will select from a list of hobbies and interests though an onboarding flow resembling that of Flipboard. This process then creates custom YouTube channels based on those picks. For example, if you’re really into “camping” or “animals,” you can add these sections to your “What to Watch” section.

Users can also now hide pre-configured feeds (like “sports” or “kids”) if they don’t care for that sort of content.

And the app introduces expanded social sharing functions that go beyond Facebook and Twitter to include email and other methods. When a friend clicks a shared link, they’ll go to the TiVo portal where they can choose to record the show (if they’re a TiVo user) or be directed to the content itself (e.g. a list of episodes on the TV channel’s own website).

New Pricing: No Subscription Fees For Year One

Perhaps the most dramatic change to TiVo BOLT is the company’s implicit acknowledgement that its current business model could be an issue going forward as more TV viewers cut the cord and turn to low-cost streaming services as their source for TV and movie entertainment.

While TiVo has focused on expanding the cable TV customer’s experience, those customer numbers are dwindling. And TiVo’s subscription-based model can be hard to stomach for those who are looking for cost savings by signing up for cheaper services like the under-$10-per-month options from Netflix or Hulu, for example.

With the BOLT, TiVo isn’t going so far as to ditch subscriptions, but is instead is deferring them in a way – a move that the company likely hopes will hook new users so they’ll be willing to pay the fees when the time comes.

TiVo, of course, wouldn’t exactly admit that the TV market’s shift is potentially bad for its business, but the new product and pricing does indicate the company understands it’s not enough to just be an upgraded DVR for the cable TV viewer. It has to find a way to appeal to those who want multi-platform viewing and over-the-air DVR functions, too.

“We do a significant amount of business with the cable TV providers so we’re not encouraging people to drop their cable subscription, but the reality is the market is a lot more dynamic than even a few years ago,” admits Jim Denney, VP of product marketing at TiVo.

“BOLT should have a strong appeal to [cord cutters]…you get a full DVR, all the OTA DVR functionality, and all the OTT applications that round out your content experiences,” he says. “We’re building it for people who have decided they’re not going to have pay TV, but it’s a flexible platform – it can satisfy both contingencies.”

The TiVo BOLT will go on sale tomorrow on Amazon and Best Buy and will arrive in retail channels by Sunday. Orders will be fulfilled beginning Monday.