With the rise of smartphones and messaging apps, emoji and stickers have also grown in popularity, and are now a part of our everyday conversations. But the standard set of emoji that come pre-installed on the iPhone can be limiting. Today, a new application called imoji launches in hopes of changing that, by allowing you to turn any image into a custom sticker or emoji for use with iMessage.

Imoji is one of many new applications that has opted to create what’s more of an add-on to Apple’s default messaging app, iMessage, instead of trying to build its own mobile messaging client, like WhatsApp, for example. Others, including the recently launched Ultratext or the GIF-sharing Nutmeg are doing something similar – that is, operating as extensions to iMessage. 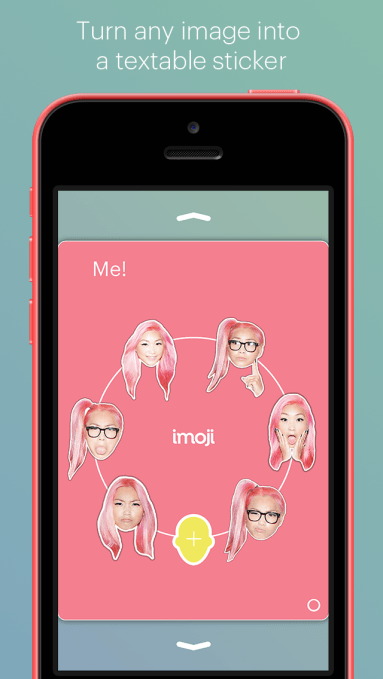 With imoji, this gesture-driven application lets you create stickers of your own using any image you find on the web, or from a photograph you take yourself or pull out of your iPhone’s photo gallery. The app then offers you a set of simple tools to zoom, crop, and finally cut out your image with a pair of virtual scissors so it appears like a real emoji or sticker.

There is a bit of a learning curve involved with building your first imoji, but after one or two, you get the hang of it.

Afterwards, you can set your creation as public or private, tag it and then use it within an iMessage text.

And if you’re not exactly the creative sort, imoji also offers a search screen where you can look for emoji already designed and shared by other users.

Here, a set of trending emoji from across the app’s user base will also appear, which you can quickly drag and drop into an iMessage.

The imoji app was dreamed up by Tom Smith, previously of Apple, and also the co-founder at Offline, a monthly mobile magazine focused on culture, design, comedy and opinion.

Smith explains that Offline’s co-founder helps to manage that operation, which is how he had time to work on this new project. Imoji, he says, has been in development over the past several months with a different engineering team, which also includes former Apple engineers. 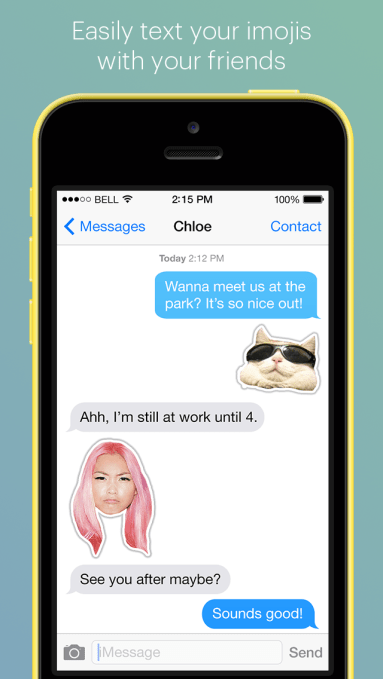 “Obviously, there’s a massive trend that goes on with emoji and stickers…and what it’s really all about is people finding new ways to communicate,” Smith explains, detailing why he wanted to work on this app. “People use emoji to describe tone – and fundamentally, it’s an easier way to express yourself than punching out of couple of sentences.”

But, he adds, some of the stickers that are popular in overseas markets haven’t really gained traction in North America – perhaps because they’re kind of silly and cartoon-like, which doesn’t always resonate with this audience.

The new app has been in testing with 100 content creators before today’s public debut, and this group has already pushed out “multiple thousands” of stickers. Most of these are faces, as you can tell by searching the app’s database or viewing the set of currently trending emoji. And celebrity faces tend to be the most popular.

In a future release, the app will also introduce more social features which will expand upon the basic profiles users create today, while also allowing users to follow favorite content creators on the app, who will in turn earn points when their emoji are sent. Longer-term, the company foresees a business model where some of the emoji in its database could be sponsored, allowing brands to insert themselves into users’ private conversations in a more welcome (that is, opt-in) fashion.

Imoji has been bootstrapped so far, but has just begun discussions with investors.