Offline is a new publication for Apple’s Newsstand on iOS that comes from a team of developers and designers from The New York Times, Audible, Instagram, BlackBerry and Apple itself.

Offline differs from many other magazines on iOS in a couple of very important ways. First of all, it offers both text versions of stories and professionally produced audio that you can listen to at any point in an article. And it also boasts a unique cost structure that the team hopes will allow it to pay 2-3x what normal freelance writers see for contributions.

An hour of broadly targeted content a month, with an emphasis on discovery and intellectual curiosity. That’s what co-founder Tom Smith says Offline is focused on offering. He likens the content to what you might find in the New Yorker, or the early days of TED, where uncovering something interesting — on any topic — was the reward for viewing. 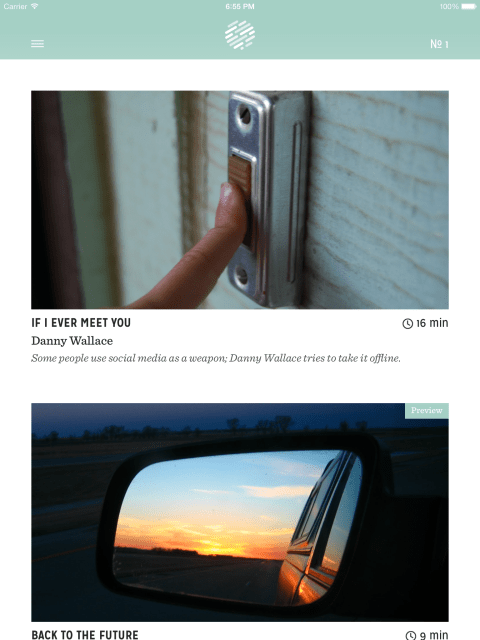 Smith spent most of the last decade cutting his teeth in various analysis positions at Apple from iPhone launch teams to ops, R&D, Siri and Maps efforts. Smith left Apple in August to start Offline. He says that the team he and co-founder Brad Flaugher have put together has an executable product that focuses on writer empowerment.

When I spoke to developer and publisher Marco Arment when he launched his iOS app The Magazine, one of his big hopes was that he would be able to pay contributors a substantially higher fee than many freelance writers command. Arment sold The Magazine, but its new owner Glenn Fleishman continues to pay well for articles.

Smith says Offline will continue in this vein, paying handsomely for its 5 monthly articles. The payment scale will be based on giving each writer 10% of the app’s revenue. Smith says that he hopes to eventually pay up to $5,000-$10,000 for an article this way, far above the industry averages of $0.50-$2.00 a word. The pieces typically run around 1,000 words, though some are longer and some are shorter. 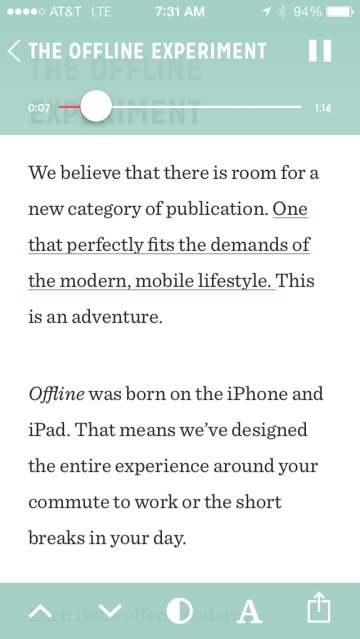 Offline’s pieces are initially all sourced from writers and personalities with large online followings. Because the payment for articles comes in the form of a percentage of revenue, there is incentive for those contributors to promote the app as much as possible. This ‘word of audience’ is what Smith is counting on to spread the word about the app initially. That and, I suppose, pieces like this one if we’re being honest.

Despite the recent pessimism when it comes to Apple’s treatment of newsstand, Smith is still betting on the category. “It’s perfectly built for serving magazine and periodical content,” Smith says. He envisions Offline and other efforts like The Magazine and The Loop Magazine building up the platform together. “It’s remarkable how much [Newsstand] has underperformed,” he adds.

Still, Smith calls the decision by Apple to allow users to place Newsstand into a folder ‘disappointing’. But, he says, Apple is still promoting Newsstand content heavily on the App Store.

The Magazine served as a partial inspiration for Offline, and Smith echoes some of the tenets there. A purpose-built app, crafted to serve content on a device without emulating the look or feel of printed media. As with the best examples I’ve seen of digital magazines, there is very little embellishment in Offline, and it certainly isn’t a simple ‘viewer’ for scanned PDFs of magazine pages.

The Offline app itself is beautiful, with great typography and a friendly but not overbearing interface. The marquee feature is ‘Tap to Play’, which allows you to tap on any sentence of text to switch over to the audio recording of the article. The app also keeps track of your reading progress with a simple meter, and will sync up your reading and listening if you switch back.

I began reading the inaugural issue of Offline at the gym, and popped it in my pocket when I got to the car — finishing the first article by audio on the way home. This is the exact scenario that Smith says will help people finish out their hour a month. You’re not beholden to your eyes or ears to finish an article, you just take it in the way you want. 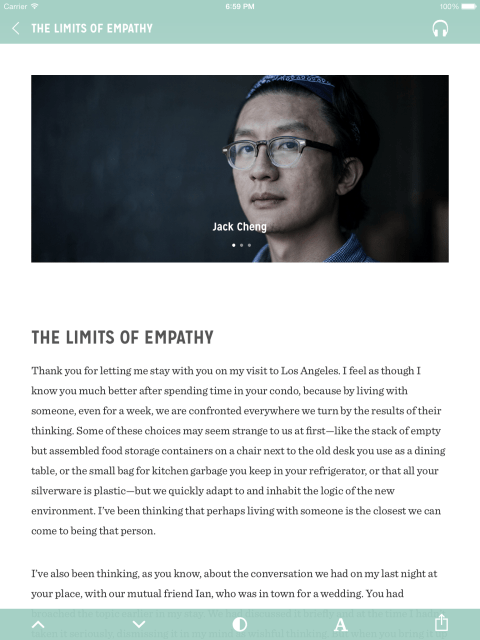 And the audio content is incredible. It’s professionally narrated, not machine translated. When appropriate, the articles are embellished with audio effects in a similar manner to a modern audio book or radio play. When straight narration is called for, simple musical introductions are used to lead you in and out.

As time goes on, Offline will balance writers with large social followings with those who may have less of an online presence. The second issue is already packaged and will feature a different mix of writers than the first one.

I’ve read more quality articles in purpose-built publications like The Magazine, The Loop and now Offline over the past year than I have any traditional publication — whether they were in print or ‘converted’ to iPad. Balancing content will be key to Offline’s success. Presenting intellectual explorations alongside comedy and pathos with an emphasis on quality seems like a good recipe.

Each issue will run $0.99 and will contain 5 articles. The first issue is out now and features one free preview article.