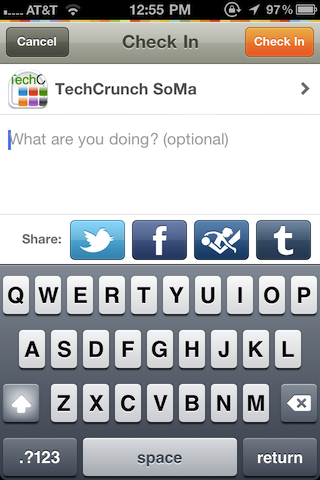 This past March, I came home from SXSW with a problem. The so-called “location war” hadn’t yielded one check-in service to rule them all. In fact, several new ones popped up just at that conference alone. Check-in fatigue set in.

Since then, the problem has only gotten worse. Now Facebook has launched itself right smack dab in the middle of the location space with Places. And others like Yelp are still pushing hard there. It’s getting even more out of control. I’m about ready to declare check-in bankruptcy. Or I was, until Gowalla decided to do something bold.

The location-based service has decided to fundamentally altered their app to allow you to check-in to not only their service, but also into Facebook’s and even Foursquare’s as well. Yes, they’ve just become compatible with their chief rivals.

Gowalla 3.0, launching today for the iPhone, is the biggest change the service has undergone since it launched at SXSW nearly two years ago. Back then, the app seemed to be more about collecting polished virtual goods at locations and swapping them around town. Now Gowalla is a straight-up check-in machine. Not only can you check-in to the services mentioned above, Gowalla pulls in all the check-ins from your friends on those services.

Yes, they’ve created a unified check-in service. You see check-ins from all of your friends even if they don’t use Gowalla at all. It’s wonderful.

And it actually goes deeper. It’s one thing to simply pull in check-ins from other services to show you, and to allow you to check-in. But Gowalla has actually done the manual labor to sync up venues between their own place database, Facebook’s place database, Foursquare’s place database, and even Twitter’s place database. It’s still a bit of a work in progress, but co-founder Josh Williams says that the majority of the hard work is now done.

The end result is that when you check-in across all the services in Gowalla’s app, they sync up to the places in those other services.

With 3.0, Gowalla has also taken steps to simplify the check-in process itself. On the homescreen you’ll now see a nice, bright check-in button at the bottom center. When you hit this, Gowalls scans the places nearby and cross-references those with the places you often go to. They then suggest a place they think you’re at, so you could conceivably check-in with just two-clicks, if they’re right.

Williams says that in their tests, they’re right about 80 percent of the time, currently. If they’re wrong, it’s just a matter of clicking on the venue to select a new one nearby. So it’s three-clicks instead of two.

And it’s from this check-in screen where you can also share your check-ins to Facebook, Foursquare, Twitter, and even Tumblr, all with one click. The first two obviously check you in to the same location on those other services. If you send the check-in to Twitter, you’ll tweet out a link to the Gowalla page for the place, and the tweet will be geotagged to your location. If you send it to Tumblr, the venue’s icon and name will be made into a Tumblr post on your blog with text alongs the lines of “I’m at VENUE”. 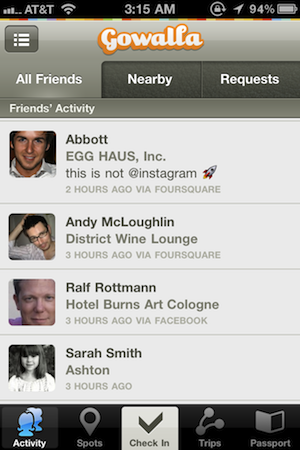 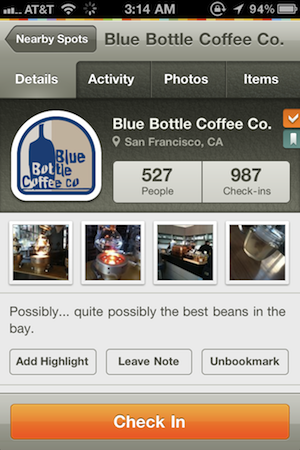 So why did Gowalla do this? Is this them conceding check-in defeat to their larger rivals? Williams doesn’t see it that way. Instead, he talks about how people often tell him that they love Gowalla’s design and functionality, but they don’t use it very much because all their friends are already checking in on Foursquare or Facebook. So Williams and his team eliminated that excuse.

One big question is how Foursquare will react to this? While sites like this one have played up the Gowalla/Foursquare rivalry, the truth is that the two sides just don’t know each other well. In fact, Williams and Foursquare co-founder Dennis Crowley only met for the first time in late March this past year. Yes, after SXSW. How do I know? I moderated a panel that both of them were on. Awkward.

Since then, they’ve only interacted briefly at events a few times, Williams says. And he really does think that Foursquare will be okay with the new Gowalla feature. After all, they’re just using Foursquare’s public API to do all of this stuff. In a way, he hopes they’re the best app built on top of the Foursquare platform.

Facebook is likely to take the move much better. This kind of thing is exactly what they want other services to build. Facebook wants to be the underlying location platform that the best services are built on top of. Though they might have preferred that Gowalla was only using their platform, and not Foursquare’s. That’s what another player in this space, Loopt is doing.

Where things might get a little messy is if Gowalla opens up their synced places database, which Williams says they plan to do through their API. Each of these companies wants to own that data and Foursquare spent a lot of time building out what they have now. At the same time, both the public and developers have been clamoring for this. So we’ll see.

It’s definitely worth noting that Gowalla is not the first service to try to unify check-ins. A service called check.in built a way to do this via the mobile web around the time of SXSW last year. But Gowalla’s execution is much better. And Gowalla also isn’t starting from scratch, they have a lot of users already. Check.in was built by two of the founders of Brightkite, but it was a separate service. (They’ve since moved on to other things.)

Alongside the big additions, Gowalla 3.0 has several smaller ones that make it an all-around better app. These include better picture integration, Highlights (a nice feature that was on the website) integration, a new UI, and a new feature called Bookmarks. As you might imagine, this allows you to easily tag any place to add it to a list so you can easily find it later.

The other really nice addition though is a feature called Notes. This allows you to easily leave personalized messages for any Gowalla user at any location around the world. When create a note for someone, they get an email telling them about it. But they can’t see it until they show up and check-in at the venue it was tagged to.

You can also leave notes for yourself. This is useful for something like a grocery lists. You could leave a note with your list at a grocery store so that when you check in, there it is.

Williams also envisions that down the road, you might be able to leave friends things like micropayments or free drinks this way.

Again, right now, Gowalla 3.0 is iPhone-only. But the Android version should be launching in a few weeks. And the iPad and BlackBerry versions will be updated as well.

So get it while it’s hot. Or at least before Foursquare blocks their API! You can find Gowalla here in the App Store. 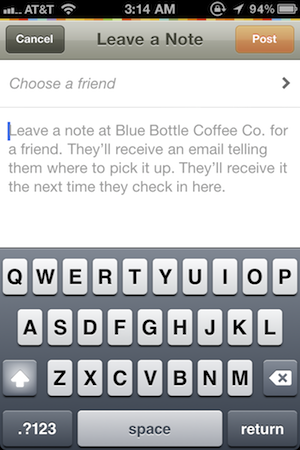 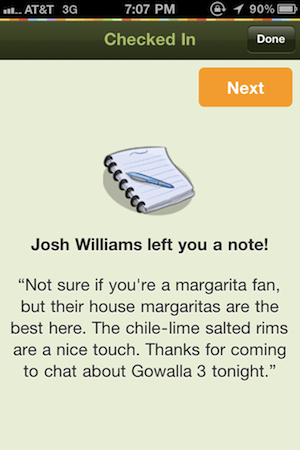