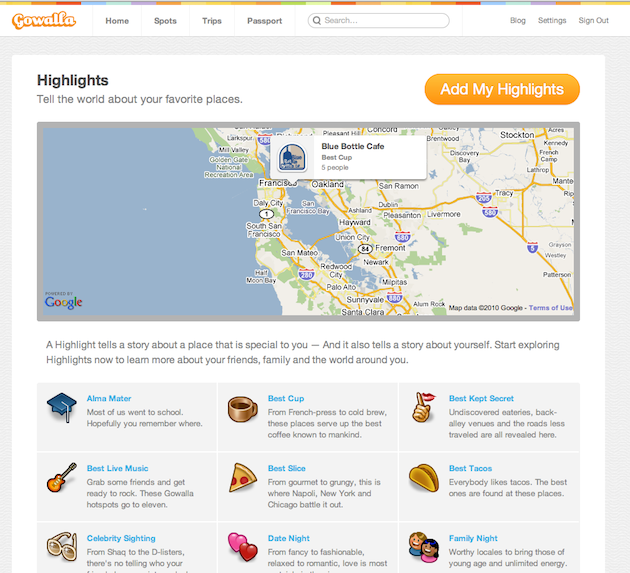 If you didn’t think the check-in was a commodity before Facebook launched their Places feature, you likely do now. But Gowalla has known that for awhile, and that’s why they’ve been moving to extend the service and build on top of the check-in. Comments and photos came several months ago. Today brings another nice addition: Highlights.

The best way to think about the feature may be to think back to the “25 Things About Me” meme that spread throughout Facebook last year. The meme asked you to answer a set of 25 questions and send the answers to your friends. Gowalla Highlights is similar in that they want you to tag about 20 real world places based on a set of criteria. For example, you’re asked to name you favorite “Date Night” spot, the place you think has the “Best Tacos,” your “Alma Mater,” and your favorite “Watering Hole,” among other things. Each of these answers reveals a bit about who you actually are, and where you spend your time.

Where this gets really interesting is when you bring the social graph into it. So, for example, if I check-in near a spot where a friend of mine asked his wife to marry him, I’ll get a message alerting me of that. Or if I’m looking for the best taco place in Austin, Texas, I can visit the Highlight page and see what the masses are voting for. There are a lot of potentially interesting uses for this when it starts to get populated with a lot of data.

And co-founder Josh Williams knows that. He thinks of Highlights as sort of a replacement for the atlas. “In 2010, what was the best scenic view point in Seattle?,” Williams wonders. With Gowalla Highlights, he’d be able to tell that.

Williams notes that the idea behind Highlights came about in a sort of odd way. While the feature is launching today in beta on the website version of Gowalla, they actually thought of it while building the iPad version. Williams says that the way you can manipulate a map on the iPad made this social geo atlas idea make a lot of sense. With that in mind, it shouldn’t be surprising that Gowalla is working quickly to bring this feature to both the mobile apps (in about a month) and the iPad (shortly after that).

They chose to put this on the website first because it’s easier to test and built it out there. Williams notes that close to 50 percent of Gowalla’s active users now visit the website on a weekly basis to see their Passports (Gowalla profiles), look at pictures, or comment. As they add more features, such as custom Passports, this has been growing quickly.

But obviously, mobile is still the key to the app. And Highlights is going to make the experience better. It’s the latest step in what Williams calls “the intersection of people and places” — in other words, it’s the latest step beyond being just a check-in service. You’ll note that you don’t have to check-in at all to use this feature.

But the truth is that Gowalla always has been more than that. At first, it was all about virtual items based around check-ins. That aspect never really took off, and it has since been depreciated (but is still around if user want to use it). Now it’s all about this real world interaction with places. Williams notes that Gowalla’s Trips feature has been working well, and hints at another new feature due shortly as well.

As with the rest of Gowalla now, Highlights will be a part of the API. Williams says he’s excited to see what kind of visualization tools people come up with using this data. I’m excited to see what my friends consider to be their “Take My Breath Away” spot. 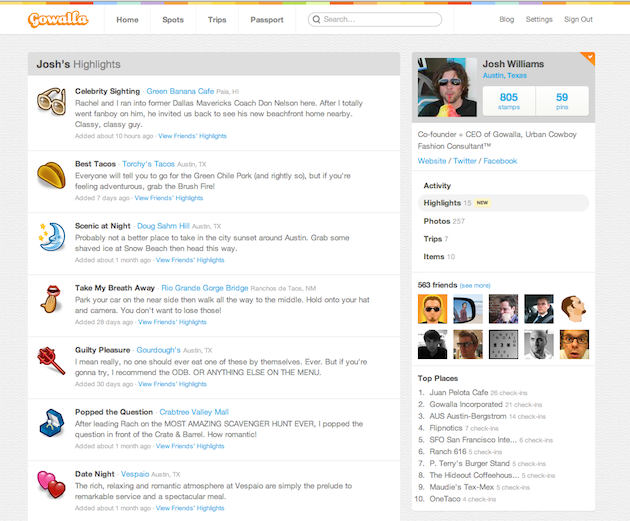 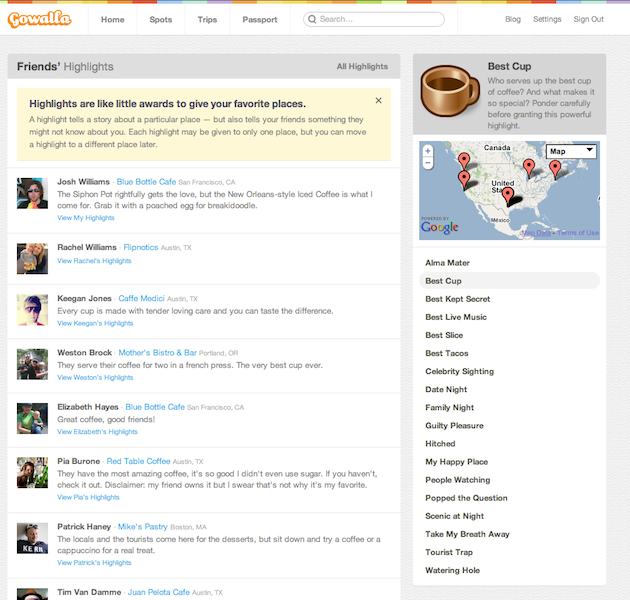