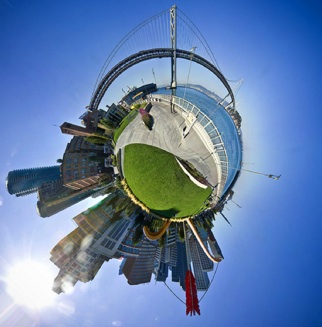 Here is the problem: These efforts at creating an underlying database of places are duplicative, and any competitive advantage any single company gets from being more comprehensive than the rest will be short-lived at best. It is time for an open database of places which all companies and developers can both contribute to and borrow from.  But in order for such a database to be useful, the biggest and fastest-growing Geo companies need to contribute to it.

I put this suggestion to Foursquare CEO Dennis Crowley the other night at a party, and he was enthusiastic about the idea. Foursquare is building up its own comprehensive database of places, which it calls “venues,” through its users who add places they want to check into, if they don’t already exist. Foursquare matches their GPS lat/long coordinates to its database of venues (businesses, points of interest, even people’s homes). Later I followed up by email and asked Crowley, “Isn’t the quality of your places directory, built by your users, a competitive advantage?” His response:

yeah, but so was the social graph. but facebook connect showed that things work better when we all play nice. the “facebook connect of places” would be amazing. not sure who will build it – goog, fbook, twitter, etc – but i bet you it’s a problem that’s mostly fixed by next year. there’s a lot of people working on this problem.

For what it’s worth, Twitter founder Jack Dorsey also happened to be in the room that night, and his reaction was a little bit more lukewarm and cautious. (I should note that Dorsey was not speaking in any official capacity for Twitter and this was just idle cocktail chatter).  But given Twitter’s recent moves to claim more parts of the Twitter eco-system for its own and the resulting controversy, it strikes me that Twitter could regain some lost developer goodwill by creating such an open database of places. I suspect Twitter does indeed want to create the “Facebook Connect of Places,” and open that up to developers through its APIs.  Mixer Labs, which it acquired, was certainly going in this direction with its GeoAPI, which Twitter is still supporting.  Hopefully, all the places data from geo-coded Tweets will go in there as well.

A Facebook Connect for places doesn’t quite go far enough.  Crowley’s analogy falls short because Facebook still controls the social graph. It exposes that social graph (the connection of its members to each other) to other Websites and developers, but other Websites cannot add to that social graph on their own. A truly open database of places should allow both give and take. It should be one that everyone can contribute to and nobody necessarily owns. Foursquare should be able to update it as easily as Twitter or Google, or any other Geo startup. The best data should prevail.

The counter-argument is that somebody—Twitter, Google, Facebook—needs to be in control of the database in order to ensure its quality.  If you let any random developer with a geo app update the database, it could end up being filled with inaccurate geo-data or worse, geo-spam.  I got the feeling Dorsey’s hesitation was partly due to such concerns.  But surely there are ways to design a places database which rewards good data over bad.  Maybe a place doesn’t become official until two or three contributing databases agree it is the same place, or based on the overall trustworthiness and historical accuracy of the source.

An open places database would also self-correct over time.  And companies could choose to refer to it only when a specific business or place is missing from their own vetted geo-directories.  In other words, let the best data prevail.  And instead of a dozen companies all building the same geo-directories, thousands could be innovating on top of an open database with new Geo services, advertising, and apps. It should just be part of the basic fabric of the mobile Web.