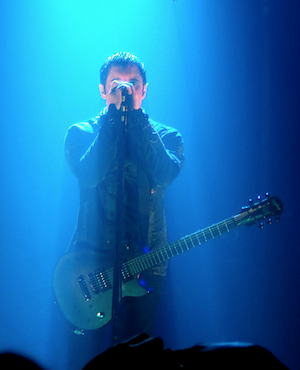 As you may be aware, musician Trent Reznor wrote and recorded (along with Atticus Ross) the score for David Fincher’s new film, The Social Network — you know, the Facebook movie. Therefore, he must be an expert on Facebook and love the service, right? Well, not exactly. Okay, not at all.

In an interview with Drowned in Sound, Reznor talks candidly about his feelings about Facebook and social networking as a concept in general. You may recall that last year he half-quit Twitter after getting creeped out by people on the network, then sort of came back to use it for promotion of his work. The publication notes that Reznor has been quoted in the past as saying “Facebook sucks”, but he downplayed that, saying he may have said something like that in passing. But then he jumped a bit deeper into what he meant.

One problem Reznor has with Facebook is the “falseness” that accompanies it. He notes that if as many people listened to Joy Division and “liked” them on their Facebook page, they’d be bigger than U2. What he’s suggesting, of course, is that people don’t put their actual selves forward on the network and instead portray themselves as they want to be seen for whatever reason. Certainly, there’s a lot of that going on. “I’ve seen that with people I know in real life, and I check them out online, it’s not always the same person,” he notes.

Reznor also doesn’t like the disconnect of social networking in general. “I guess I’m just coming from an older school of: when you met people you met them. Whether you spoke to them on person or talked on the phone, when you interact with them it would be a real person and not some avatar of themselves,” he says. Obviously, he’s not alone there either. That said, he does note that these networks have helped him get back in contact with people he hadn’t seen in a while, which he does think is useful.

But the most interesting thing he had to say was specifically about the way Facebook is designed and implemented:

As far as the concept goes, I don’t think it’s actually executed that well. The layouts [sic] kind of foolish and the processing is terrible, as a tool. When I see the media heralding Zuckerburg, putting him up on a pedestal of genius and mentioned in the same breathe as Steve Jobs, I’m highly degree [sic] with that. He was in the right place, at the right time, with a functional tool.

Reznor concludes with the idea that what Facebook did to MySpace and Friendster can still easily be done to them. Someone just needs to execute better. That sounds obvious enough, but it would likely be very hard for anything to get traction against a service with 500 million users. Reznor acknowledges that — “most people use Facebook because everyone’s on Facebook” — but still thinks it can fall.