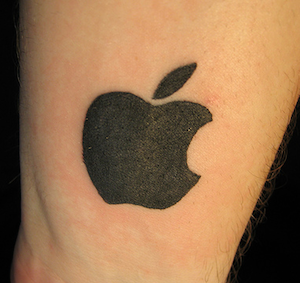 As we all know by now, comments on the Internet are a fascinating thing. My favorite involve the word “fanboy.” Generally speaking, it means you write (stories, tweets, whatever) about a certain topic with a positive angle. It’s meant to be derogatory, but the truth is that it’s so overused that it’s almost completely meaningless. But for the sake of this post, I’ll play ball. I have a confession to make: I’m a fanboy.

Now, I didn’t say specifically what I’m a fanboy of, because there have been too many titles bestowed upon me over the years. At various points over just the past few months, I’ve been an Apple fanboy, a Google fanboy, a Twitter fanboy, a Facebook fanboy, a Foursquare fanboy, a Gowalla fanboy, and yes, even a Microsoft fanboy. Never mind that most of companies compete with one another, so it would be hard to be a true fanboy of multiple ones without misrepresenting your fanboydom of a few of the others. We’ll just say I’m a fanboy and leave it at that. And that leaves me wondering: why wouldn’t you want to be a fanboy?

To me, the diluted version of the term means that you’re passionate about a certain technology. And isn’t that why any of us do what we do? Sure, you’ll throw the term “objective journalism” at me, but what does that really mean? Is any journalism truly objective? Every human being has an opinion one way or another about everything. Objective journalism is simply the practice of suppressing that opinion. For certain news fields, like politics, I see the value in that (at times). For technology, I’m not sure that I do.

If I’m reading about a new technology, I want to know what the author actually thinks. Take a new tech product for example, I want to know if an author thinks it’s any good or not. Or a new startup — same thing. Or some move a big technology company is making. It’s all the same. If I wanted a completely objective take on the story, I’d read the press release or the spec sheet. Actually, no I wouldn’t. Those are usually more full of bullshit than even the most biased reporting (wait, my laptop is supposed to have 12 hours of battery life on a single charge — it says so right there).

Others will say that the term fanboy doesn’t just mean you love something — it’s that you love something and are unfair against its competitors because of that love. That’s the only way I can explain the angry comments when I write posts with the headlines “An iPhone lover’s take on…” “Your bias is obvious!” the commenters will shout. Well yes, I put it in the title. How observant.

But that’s the funny thing about being a fanboy — you can be a fanboy of anything. You can switch your alliances at a moments notice. There is nothing tying you to the love of a certain product. As I’ve written numerous times before, in the 1990s I would have been called a Microsoft fanboy — I loved Microsoft products and hated Apple ones. Today, I’m called an Apple fanboy. Times change. And they’ll change again.

Angry commenters seem to want to believe that you can’t actually just like a product. There has to be some ulterior motive. Either you’re paid off, or you’re just blind. Or both. It’s simply an easier (non) argument to make than having an actual discourse.

Make no mistake, those people are fanboys too — but worse. They feel the subject of their adulation is under attack, so they become rabid. But I’ll repeat that I think overall this is a good thing. Balance and all that.

In closing, let me state again for the record that I’m fine with the fanboy label. Apple fanboy, Google fanboy, Twitter fanboy, etc — those are all appropriate and welcomed. But it may be easier (and less contradictory) to just say that I’m a fanboy of good products. And I always will be.