Twitter announced on Monday new measures to prevent disinformation tied to the Russian government from spreading in light of the country’s ongoing invasion of Ukraine.

The company will begin adding labels to tweets containing links from Russian state-linked media outlets noting their affiliation. The labels are accompanied by an orange exclamation point, warning Twitter users to “stay informed.”

Twitter will also begin reducing the visibility of Russian state-linked media on the platform, dampening the ability for those outlets to reach a wide audience.

Today, we’re adding labels to Tweets that share links to Russian state-affiliated media websites and are taking steps to significantly reduce the circulation of this content on Twitter.

We’ll roll out these labels to other state-affiliated media outlets in the coming weeks. pic.twitter.com/57Dycmn8lx

The changes to tweets with ties to the Russian government will roll out immediately. Twitter says it plans to add similar labels for other “state-affiliated media accounts” in the next few weeks.

“As people look for credible information on Twitter regarding the Russian invasion of Ukraine, we understand and take our role seriously,” Twitter Head of Site Integrity Yoel Roth said in a tweet. “Our product should make it easy to understand who’s behind the content you see, and what their motivations and intentions are.”

Twitter began labeling state-controlled media accounts two years ago, but those tags appear on an account’s profile page and aren’t as visible as labels within the tweets themselves. 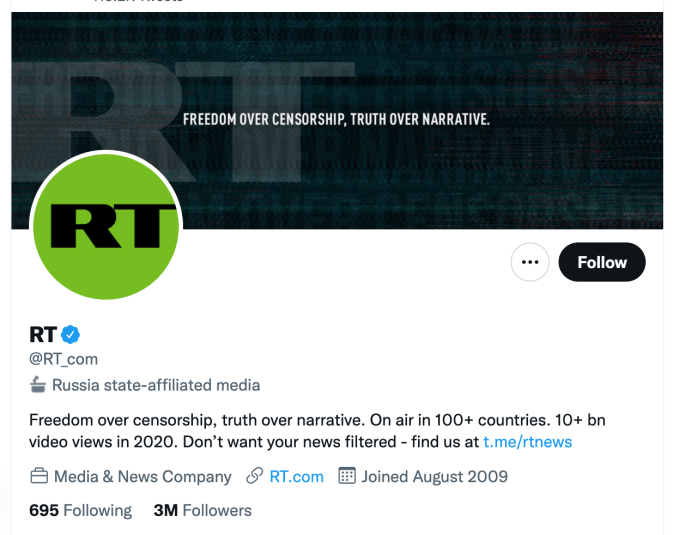 The company does not allow advertising from state-affiliated media accounts, a change it implemented in 2019 after a number of accounts linked to the Chinese government spread propaganda about protests in Hong Kong.

Roth added that the company has seen more than 45,000 tweets a day linking to outlets affiliated with the Russian government since Russia’s invasion of Ukraine began just a few days ago. Roth characterized the new labels as a way to “add helpful context” to conversations on Twitter, in line with its efforts to do the same with tweets related to global elections and the pandemic.

Ukraine takes the resistance to cyberspace, assembling an ‘IT army’ to hack sites from Russia and its allies, calls on tech leaders to get involved