Twitter is introducing new labels for accounts and tweets tied to government officials and “state-affiliated media.”

“Twitter provides an unmatched way to connect with, and directly speak to public officials and representatives,” the company wrote in the blog post announcing these changes. “This direct line of communication with leaders and officials has helped to democratize political discourse and increase transparency and accountability.”

However, Twitter suggested that these labels are part of a larger effort “to protect that discourse because we believe political reach should be earned not bought.”

When it comes to labeling government officials, the company said it’s focusing on those who represent “the official voice of the state abroad,” including “foreign ministers, institutional entities, ambassadors, official spokespeople, and key diplomatic leaders.” It’s starting with the five permanent members of the United Nations Security Council: China, France, Russia, the United Kingdom and the United States, with plans to add other countries in the future.

Twitter said these labels will not apply to “the personal accounts of heads of state,” because “these accounts enjoy widespread name recognition, media attention, and public awareness.” For example: President Donald Trump’s Twitter account has not been labeled, but Secretary of State Mike Pompeo’s account has. 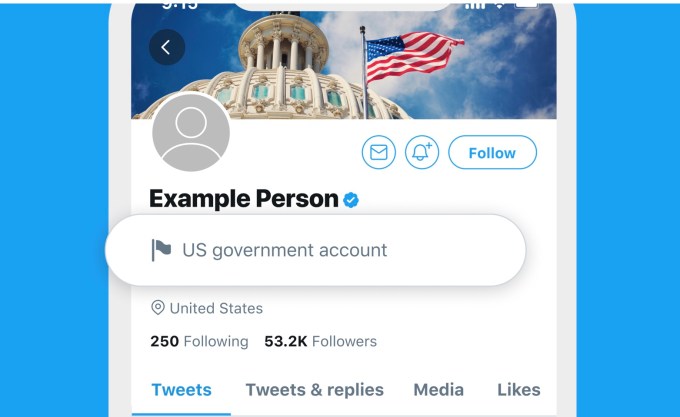 As for state-affiliated media, Twitter said that media organizations that maintain editorial independence despite government financing, such as the BBC and NPR, will not labeled.

Instead, the label will be reserved for “outlets where the state exercises control over editorial content through financial resources, direct or indirect political pressures, and/or control over production and distribution” — for example, Russia-backed RT. To identify these outlets, the company says it’s consulting outside experts, including members of its Digital and Human Rights Advisory group (part of Twitter’s Trust & Safety Council).

Twitter also said state-affiliated media will no longer receive promotion via the service’s home timeline, notifications and search. (This limitation does not apply to government officials.) The service had already blocked these groups from purchasing advertising after an incident last year in which China’s state news agency bought promoted tweets to portray pro-democracy protests in Hong Kong as violent.