Facebook, Nextdoor and many others in tech have focused on the concepts of community and neighborhoods to build connections between people and in turn offer services relevant to them. Today, a startup called Venn, which is bringing a new approach to that concept — it’s focusing first on apartment dwellers and cutting deals with building landlords to supply social networking services to their tenants — is announcing $60 million in growth funding to expand its business to more cities.

This round, a Series B, is being led by Group 11, with “significant” participation from Pitango, Hamilton Lane and Bridges Israel, and it brings the total raised by Venn — not to be confused with the LA gaming startup with the same name — to $100 million to date.

Venn is not disclosing its valuation but Or Bokobza, Venn’s CEO who co-founded the startup with Chen Avni, confirmed in an interview that it’s an upround. For some context, in the startup’s last round of funding — Pitango previously led a $40 million round in 2019 — PitchBook estimated its valuation to be over $400 million ($439 million to be exact). We’re still digging on this detail and will update when/if we learn more. For some further context, Venn said that it saw user growth boom by 1,200% in 2020.

Co-headquartered in Tel Aviv and New York, Venn has been around since 2017 and has built out services in three areas to date, its two HQ cities (specifically Bushwick, Brooklyn in NYC) and Berlin, with Kansas City, a West Coast location, and more cities getting officially added to the list soon. It doesn’t disclose how many users in total are on the platform but says that on average, a “cell” on Venn will have around 5,000 users and 3,000 apartments contained within it.

Venn’s business model has been described as based around the idea of a kibbutz and bringing that into a more modern context: It provides not just a way to connect with neighbors and know who they are, but also to provide those users with a way of selling items or offering services to each other, and also organizing community activities, whether that’s a playgroup for children, a small concert at a park or cafe, or a yoga class or something else. 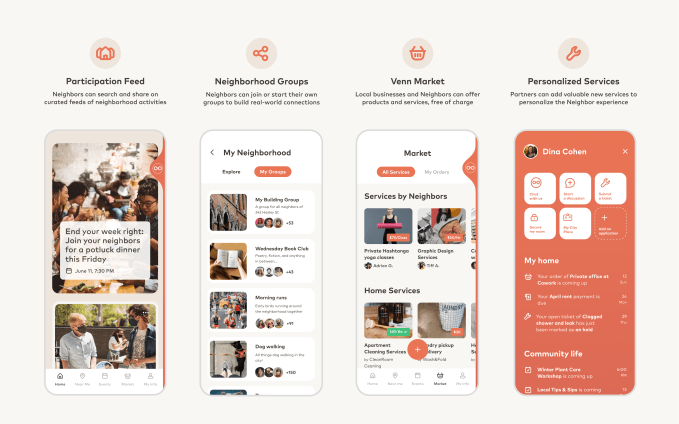 Bokobza said that the idea for the company first came to him and Avni long before they had actually thought of building a startup like Venn. The pair had moved to a neighborhood in Tel Aviv that was, in his words, “neglected” — off the grid and yet to gentrify. Yet they saw that there were others like them also moving in, so they built a platform and started to coordinate people to join it to communicate better with each other and build the community that was lacking.

Companies like Facebook have been doubling down on building more locally focused groups, but what is notable about Venn is how it has approached growing. Bokobza said that it’s focusing just on urban areas where there are large apartment buildings and is forging deals with landlords of these buildings to build links to their tenants (those deals, in turn, are part of how it makes money).

Will the pandemic spur a smart rebirth for cities?

This is an interesting idea. On one side, building communities around multidwelling units plays into one of the salient qualities of apartment communities. Despite, or maybe because of, the close proximity of so many people, they are often very anonymous.

On the other, it plays into how landlords have turned to services to help differentiate their apartments from others on the market. If you are trying to market “home” and “welcome to your neighborhood” to people, especially those who are just moving to an area, giving them access to a hyperlocal community of interesting activities and services and like-minded people is a way to bridge some of the less-familiar aspects of urban dwelling.

These hyperlocal communities are not run by the landlords, however. Venn hires (and pays) “hosts” who help administrate local sites, including creating and facilitating content, who use a digital assistant (called “Vinny”) to help moderate and approve posts before they go up. There are also voluntary hyperlocal hosts who are unpaid who also help out.

The concept, of course, has taken on a more timely and interesting profile in the last year, as people have turned toward more local activities and shopping smaller as part of their efforts to reduce social distancing, to comply with stay-in-place orders, and to help offset the spread of COVID-19.

“Loneliness was an epidemic long before COVID-19. Over the past 30 years, it’s become easier to connect with strangers around the world than our neighbors around the corner. Remember when we used to be able to walk down the street and run into our friends? Or go to the grocery store and be greeted by name? We’ve lost touch with something elemental and vital for our lives and progress: the idea of ‘Neighborhood.’ This is the problem that Venn was built to solve,” Bokobza said in a statement. “We are using the power of community to build better neighborhoods for neighbors, property developers, and local businesses alike, and our work is more important now than ever before.”

Group 11, a VC firm that has backed a number of other interesting Israeli-founded startups (they include the likes of Lili, a banking service aimed at freelancers, which also recently raised a round), see what Venn is doing as a unique enough concept that stands apart from other community platforms, and makes not just interesting business sense but possibly achieves a higher goal.

“You don’t need data to know that people crave connection, but Venn’s numbers speak volumes. People want to live in communities that make them feel that they belong, and Venn has found a way to achieve that through its technology, expertise, and experiences,” said Dovi Frances, managing partner at Group 11, in a statement. “We aren’t just investing in a business–we’re investing in people–and we’re honored to lead this round with Venn as it continues to fulfill its mission.”