The feature was first announced nearly a year ago, although the company delayed the launch to give developers more time to prepare. Since then, support for the feature has already gone live in iOS and some apps have already adopted it (for example, I’ve seen tracking requests from Duolingo and Venmo), but now Apple says it will actually start enforcing the new rules.

That means iPhone owners will start seeing many more privacy prompts as they continue using their regular apps, each one asking for permission to “track your activity across other companies’ apps and websites.” Every app that requests tracking permission will also show up in a Tracking menu within your broader iOS Privacy settings, allowing you to toggle tracking on and off any time — for individual apps, or for all of them.

What does turning tracking on or off actually do? If you say no to tracking, the app will no longer be able to use Apple’s IDFA identifier to share data about your activity with data brokers and other third parties for ad-targeting purposes. It also means the app can no longer use other identifiers (like hashed email addresses) to track you, although it may be more challenging for Apple to actually enforce that part of the policy. 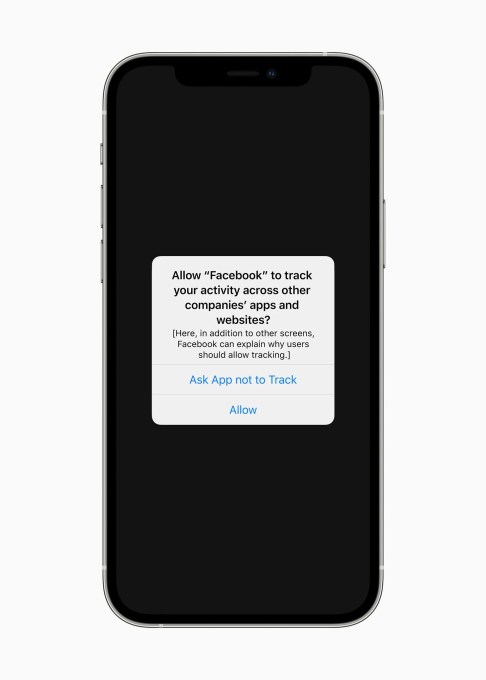 There’s been intense debate around App Tracking Transparency in the lead up to its launch. The pro-ATT side is pretty easy to explain: There’s a tremendous amount of personal information and activity that’s being collected about consumers without their consent (as Apple outlined in a report called A Day in the Life of Your Data), and this gives us a simple way to control that sharing.

However, Facebook has argued that by dealing a serious blow to ad targeting, Apple is also hurting small businesses that depend on targeting to affordable, effective ad campaigns.

The social network even took out ads in The New York Times, The Wall Street Journal and The Washington Post declaring that it’s “standing up to Apple for small businesses everywhere.” (The Electronic Frontier Foundation dismissed the campaign as “a laughable attempt from Facebook to distract you from its poor track record of anticompetitive behavior and privacy issues as it tries to derail pro-privacy changes from Apple that are bad for Facebook’s business.”)

Others have suggested that these changes could do “existential” damage to some developers and advertisers, while also benefiting Apple’s bottom line.

The full impact will depend, in part, on how many people choose to opt out of tracking. It’s hard to imagine many normal iPhone owners saying yes when these prompts start to appear — especially since developers are not allowed to restrict any features based on who opts into or out of tracking. However, mobile attribution company AppsFlyer says that early data suggests that opt-in rates could be as high as 39%.