Facebook already made it clear that it isn’t happy about Apple’s upcoming restrictions on app tracking and ad targeting, but the publicity battle entered a new phase today.

Over the summer, Apple announced that beginning in iOS 14, developers will have to ask users for permission in order to use their IDFA identifiers for ad targeting. On one level, it’s simply giving users a choice, but because they’ll have to opt-in to participate, the assumption is that we’ll see a dramatic reduction in app tracking and targeting.

The actual change was delayed until early next year, but in the meantime Facebook suggested that this might mean the end of its Audience Network (which uses Facebook data to target ads on other websites and apps) on iOS.

Then, this morning, Facebook placed print ads in The New York Times, The Wall Street Journal and The Washington Post declaring that it’s “standing up to Apple for small businesses everywhere,” and it published a blog post and website making the same argument.

While it’s easy to see all of this as an attempt to put a more sympathetic face on a PR campaign that’s really just protecting Facebook’s ad business, Dan Levy — the company’s vice president of ads and business products — got on a call with reporters today to argue otherwise. 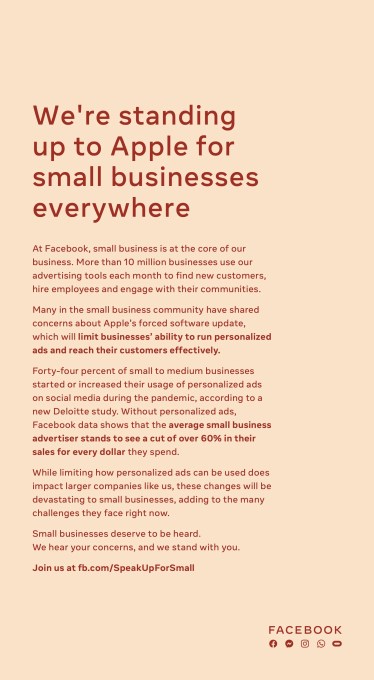 For one thing, he said that with its “diversified” advertising business, Facebook won’t feel the impact as keenly as small businesses, particularly since it already acknowledged potential ad targeting challenges in its most recent earnings report.

“We’ve already been factoring this into our expectations for the business,” he said.

In contrast, Levy said small businesses rely on targeting in order to run efficient advertising campaigns — and because they’ve got small budgets, they need that efficiency. He predicted that if Apple moves forward with its plans, “Small businesses will struggle to stay afloat and many aspiring entrepreneurs may never get off the ground.”

Levy was joined by two small business owners, Monique Wilsondebriano of Charleston Gourmet Burger Company in South Carolina and Hrag Kalebjian of Henry’s House of Coffee in San Francisco. Kalebjian said that while business in the coffee shop is down 40% year-over-year, his online sales have tripled, and he credited targeted Facebook campaigns for allowing him to tell personal stories about his family’s love for Armenian coffee.

Wilsondebriano, meanwhile, said that when she and her husband Chevalo started a business selling their homemade burger marinade, “we did not have the option to run radio ads or TV ads, we just didn’t have a budget for that” — and so they turned to Facebook and Instagram. With the marinade now available in 50 states and 17 countries, Wilsondebriano said, “It makes me sad that if this update happens, so many small businesses won’t get that same opportunity that Cheval and I had.”

Levy also suggested that Apple’s bottom line might benefit from the changes — if developers make less money on ads from Facebook and other platforms, they may need to rely more on subscriptions or in-app transactions (with Apple collecting its much-discussed fee), and they might turn to Apple’s own targeted advertising platform.

A number of ad industry groups have also taken issue with Apple’s policy, with SVP Craig Federighi fighting back in a speech criticizing what he called “outlandish” and “false” claims from the adtech industry. In that speech, Federighi said Apple’s App Tracking Transparency feature is designed “to empower our users to decide when or if they want to allow an app to track them in a way that could be shared across other companies’ apps or websites.”

We believe that this is a simple matter of standing up for our users. Users should know when their data is being collected and shared across other apps and websites — and they should have the choice to allow that or not. App Tracking Transparency in iOS 14 does not require Facebook to change its approach to tracking users and creating targeted advertising, it simply requires they give users a choice.