Ahead of the official announcement of an FTC settlement, which could force YouTube to direct under-13-year-old users to a separate experience for YouTube’s kid-friendly content, the company has quietly announced plans to launch its YouTube Kids service on the web. Previously, parents would have to download the YouTube Kids app to a mobile device in order to access the filtered version of YouTube.

By bringing YouTube Kids to the web, the company is prepared for the likely outcome of an FTC settlement that would require the company to implement an age-gate on its site, then redirect under-13-year-olds to a separate kid-friendly experience.

In addition, YouTube Kids is gaining a new filter, which will allow parents to set the content to being preschooler-appropriate.

The announcement, published to the YouTube Help forums, was first spotted by Android Police.

It’s unclear if YouTube was intentionally trying to keep these changes from being noticed by a larger audience (or the press) by publishing the news to a forum instead of its official YouTube blog. (The company tells us it publishes a lot of news on the forum site. Sure, okay. But with an FTC settlement looming, it seems an odd destination for such a key announcement.)

It’s also worth noting that, around the same time as the news was published, YouTube CEO Susan Wojcicki posted her quarterly update for YouTube creators.

The update is intended to keep creators abreast of what’s in store for YouTube and its community. But this quarter, her missive spoke solely about the value in being an open platform, and didn’t touch on anything related to kids content or the U.S. regulator’s investigation.

However, it’s precisely YouTube’s position on “openness” that concerns parents when it comes to their kids watching YouTube videos. The platform’s (almost) “anything goes” nature means kids can easily stumble upon content that’s too adult, controversial, hateful, fringe or offensive.

The YouTube Kids app is meant to offer a safer destination, but YouTube isn’t manually reviewing each video that finds its way there. That has led to inappropriate and disturbing content slipping through the cracks on numerous occasions, and eroding parents’ trust.

Because many parents don’t believe YouTube Kids’ algorithms can filter content appropriately, the company last fall introduced the ability for parents to whitelist specific videos or channels in the Kids app. It also rolled out a feature that customized the app’s content for YouTube’s older users, ages 8 through 12. This added gaming content and music videos.

Now, YouTube is further breaking into two parts its “Younger” content-level filter, which was previously 8 and under. Starting now, “Younger” applies to ages 5 through 7, while the new “Preschool” filter is for the age 4 and under group. The latter will focus on videos that promote “creativity, playfulness, learning, and exploration,” says YouTube. 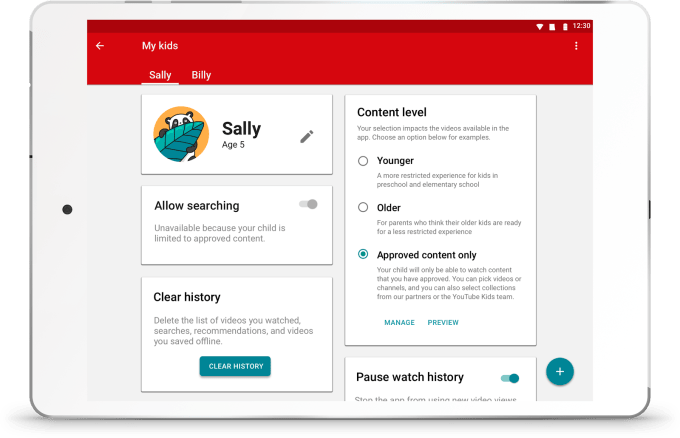 YouTube confirmed to TechCrunch that its forum announcement is accurate, but the company would not say when the YouTube Kids web version would go live, beyond “this week.”

The YouTube Kids changes are notable because they signal that YouTube is getting things in place before an FTC settlement announcement that will impact how the company handles content for kids and its continued use by young children.

It’s possible that YouTube will be fined by the FTC for its violations of COPPA, as Musical.ly (TikTok) was earlier this year. One report, citing unnamed sources, says the FTC’s YouTube settlement has, in fact, already been finalized and includes a multimillion-dollar fine.

YouTube will also likely be required to implement an age-gate on its site and in its apps that will direct under-13-year-olds to the YouTube Kids platform instead of YouTube proper. The settlement may additionally require YouTube to stop targeting ads on videos aimed at children, as has been reported by Bloomberg.

We probably won’t see the FTC issuing a statement about its ruling ahead of this Labor Day weekend, but it may do so in advance of its October workshop focused on refining the COPPA regulation — an event that has the regulator looking for feedback on how to properly handle sites like YouTube.