Amazon’s list of Prime Day deals has finally dropped. The retailer’s Black Friday-style sale for its Prime members is one of the biggest online shopping days of the year, as other retailers now take part with their own competitive sales. But some of the best deals to be found on Prime Day are those on Amazon’s own devices. This year, Amazon is pushing its Echo speaker and Fire TV Stick devices in particular, with sale prices that are 50% off (or more) from the regular list prices.

However, the devices may not be selling for their “list” price today — Amazon has discounted some items ahead of Prime Day to encourage early shopping. And some will go on sale ahead of Prime Day on Saturday, July 13 — but only if you ask Alexa “what are my deals?” to gain early access. 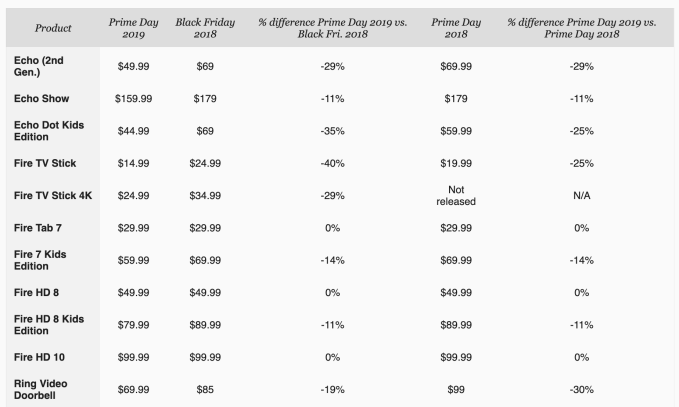 What’s interesting is that last year’s Prime Day and Black Friday/Cyber Monday bestseller, the standard Echo Dot, isn’t included on the Prime Day 2019 device deals list. Instead, Amazon is listing discounts for its Echo, Echo Show, Echo Plus, Echo Input, Echo Dot Kids Edition and even Facebook’s Portal (which has Alexa built-in), along with its Alexa-powered Fire TV devices.

More broadly, Amazon says it will offer more than a million deals during the sales event, with a special focus this year on “celeb deals” from Jaden Smith, Marshmello, Zac Brown and others, including the exclusive launch of Lady Gaga’s HAUS Laboratories beauty collection.

The full list of Amazon’s device deals is below.