Amazon’s Prime Day event, now in its fifth year, is no longer just a big sales day for Amazon — it’s become the official kickoff to back-to-school shopping season and a new sales holiday that extends across the web among rival retailers. And those retailers’ competitive response to Prime Day is bigger than ever this year, according to a new report from RetailMeNot. In 2019, the firm estimates that 250 retailers will take part in Prime Day by offering deals of their own. That’s up from 194 last year, and up from just 7 retailers on Amazon’s first Prime Day in 2015. 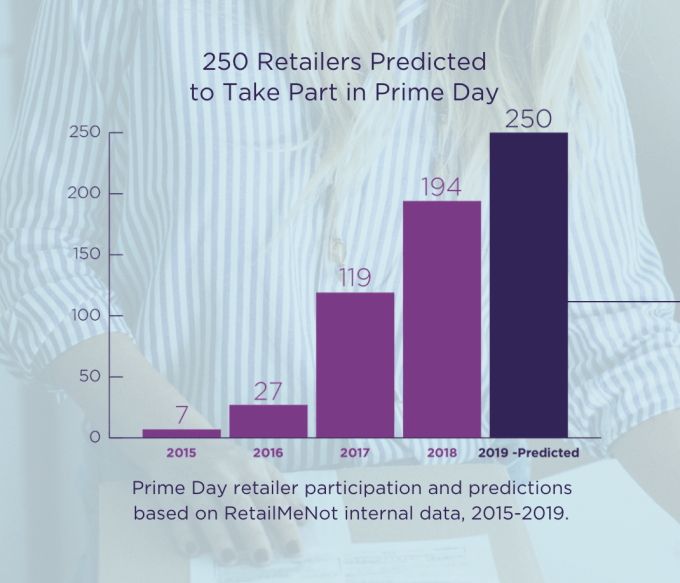 The increased participation may be related in part to the size of Amazon’s sale this year. Prime Day has been stretched out over the years. In 2018, for example, Prime Day became a 36-hour sale and, at the time, the biggest shopping event in Amazon’s history.

But more retailers today are aware that offering an alternative sale will bring in the shoppers, similar to how Black Friday and Cyber Monday sales also do.

Walmart.com, for example, is readying its answer to Prime Day by offering deals over a longer period of time than Amazon’s now 48-hour Prime Day 2019 event. Instead, of two days, the rival retailer is going for four. Walmart says it will offer “thousands” of special deals and Rollbacks starting on July 14 — the day before Prime Day starts. And these will continue until July 17, the day after Prime Day ends.

Target, meanwhile, is prepping its own answer to Prime Day with its biggest summer sale, Target Deal Days, which will take place concurrently with Prime Day (July 15-16). The retailer says it also will feature “thousands” of deals both online and in its app, with new deals each day. These deals haven’t yet been announced, either, but will expand across home, apparel, toys, and more, and will include both Target’s own brands and national brands.

While Prime Day brings the traffic and the sales, there’s some hint that the sale itself could be improved.

Based on RetailMeNot’s survey, 64% of shoppers are hoping that Amazon provides better deals on items this year, 58% want a greater selection, and 54% want more time to take advantage of deals. Nearly all also say they hope the overall Prime Day shopping experience this year is improved.

Back-to-school shoppers and parents will be dropping some cash on Prime Day, too, the report additionally found. 64% of parents say they’ll participate in Prime Day 2019 and will shop at 11 retailers, on average. Parents also plan to spend $162 on Prime Day and complete around 35% of their total back-to-school shopping during that time.