Prime Day has once again broken records. Despite serious glitches at its start, Amazon announced this morning that Prime Day 2018 grew to become the biggest shopping event in its history, beating out Cyber Monday, Black Friday, and the previous Prime Day 2017. Of course, this year’s Prime Day was longer – a full 36-hours, in fact. And while Amazon did make its comparisons to other sales holidays over the same period of time, it’s not quite the same thing to compare a shorter sale to a longer one. (Last year’s Prime Day was 30 hours, for example.)

Still, it’s a remarkable showing on Amazon’s part. So much so that Amazon has taken the unusual step of actually providing some numbers around how much people bought. Though it still declines to talk sales dollars, as per usual, it did say that Prime members worldwide purchased over 100 million products, with small and medium-sized businesses on Amazon “far exceeding” $1 billion in sales this year.

It was unclear, however, if Amazon was counting sales at Whole Foods – which did participate in Prime Day for the first time – when calculating this 100 million products sold figure, or its “best day ever” statements. We asked the company to clarify this, and confirmed that Whole Foods sales were not being included in those calculations.

That said, Amazon says that Prime members “saved millions” at Whole Foods during Prime Day, where the top buy was organic strawberries. 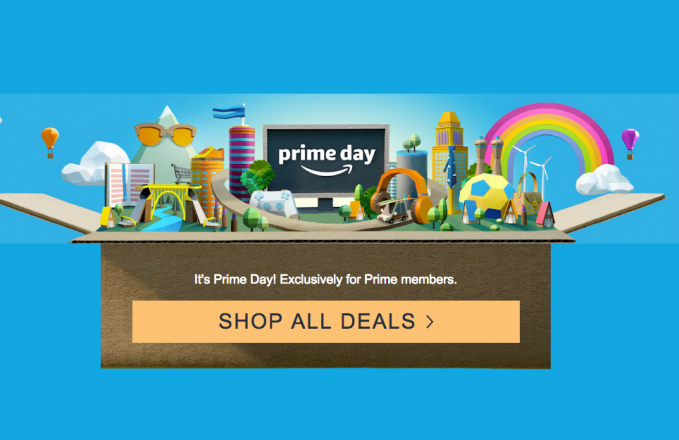 Prime Day 2018 was also the biggest event ever for Amazon devices, the retailer noted.

This can be, in part, chalked up to the fact that Amazon put its devices on sale 12 hours before Prime Day even began, which allowed people more time to buy them at the reduced prices.

Its best-sellers worldwide included the Fire TV Stick with Alexa Voice Remote and the Echo Dot.

The Dot was a top seller in 2017, too. It’s the most affordable of the Alexa-powered speakers, and was this year marked down $20 to $29.99, making it a good deal. Fire TV devices, Kindle e-readers had their best day ever on Amazon globally on day one of Prime Day, July 16, 2018. Prime Day was also the biggest sales event for Echo Show and Echo Spot.

Amazon didn’t provide numbers for any of these sales, but said “millions” of Fire TV devices were sold worldwide.

In the U.S., July 17 was the biggest day for smart home devices in history, with over a million devices sold, and Ring had its best day ever on July 16, with the Ring Video Doorbell Pro selling out. The Amazon Cloud Cam also became the best-selling security camera in Amazon history.

Outside of Amazon devices, other U.S. top sellers included the Instant Pot and LifeStraw water filters. Members purchased more than 300,000 Instant Pot 6 Qt 7-in-1 Multi Use and 150,000 LifeStraw Personal Water Filters, the retailer said. Back-to-school items did well, too, with millions of pencils and pens sold.

Different countries had their own best-sellers, which tended to include smart home items, electronics, gaming systems, tools, and other items for the home. 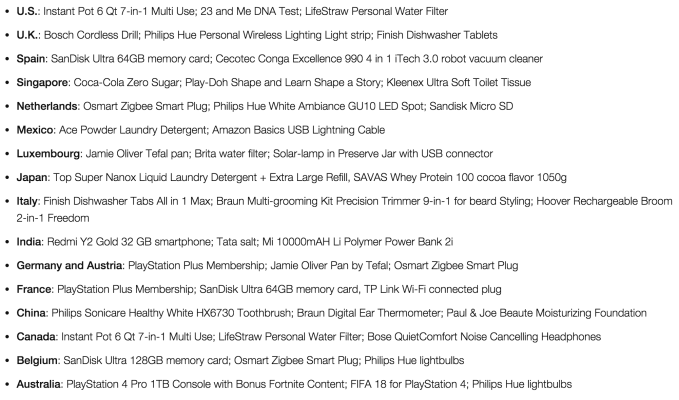 Above: Top sellers by country

The company said that a record number of Prime members shopped Prime Day in 2018, but this, too can be explained partly by expanded access to the sale – Prime Day went live in Australia, Singapore, the Netherlands and Luxembourg for the first time this year. In total, 17 countries had access to Prime Day sales.

More importantly to Amazon’s bottom line was the increase in Prime membership sign-ups. In the end, the actual sales are just icing on the cake – Prime Day’s larger goal is increasing the number of subscribers for its now $119 per year Prime membership program. Turning online consumers into paying subscribers not only increases Amazon’s subscription revenues, it boosts overall sales as those consumers begin to shop Amazon more often to take advantage of its free, 2-day shipping and other premium services – like Amazon Channels, audiobook subscriptions, on-demand music, and more.

It’s notable that Amazon Prime Day went well, given how badly it began – glitches caused shoppers to lose the ability to even see the deals or complete checkout at the beginning of the sale, potentially resulting in millions of lost sales. One estimate from Internet Retailer is even putting that figure at $72.4 million in lost revenue from U.S. consumers.

“Prime Day offers us a unique opportunity to thank Prime members with our best deals,” said Jeff Wilke, CEO Worldwide Consumer, Amazon, in a statement. “Extending Prime Day to a day and a half this year allowed us to further reward members with unbeatable deals, access to exclusive new products and unforgettable experiences that highlight the many benefits of a Prime membership. All of this was made possible because of our many valued associates – the global team that continues to make Prime Day bigger and better.”