Harry Potter: Wizards Unite, the highly anticipated new mobile game from Pokémon GO makers Niantic and Warner Brothers’ games division, is off to a good start, but it’s not breaking Pokémon GO records. According to preliminary estimates from Sensor Tower, the new game has been installed some 400,000 times in its first 24 hours in its launch markets of the U.S. and U.K. — where the game arrived ahead of schedule on Thursday. Gross player spending in these markets hit around $300,000 across both iOS and Android during this time.

This is not the full picture, however.

The game was also available in Australia and New Zealand during a pre-launch beta trial of sorts, and is only now rolling out to worldwide users on a country-by-country basis. During its beta test period, Sensor Tower estimates the game grossed around $80,000.

But in the same number of days, Pokémon GO grossed $1.6 million in those two markets.

Following its U.S. launch, it took Harry Potter: Wizards Unite around 15 hours to reach the No.1 position on the iOS App Store. This ascension is also going a bit slower than Pokémon GO did when it arrived. That game was an immediate hit, debuting at No. 1 on its launch day of July 6, 2016. It was then installed 7.5 million times in the U.S. during its first 24 hours. And it didn’t reach the U.K. until seven days later.

In its first 24 hours, Pokémon GO became the No. 1 app by revenue in the U.S., as well. The new Harry Potter title is ranked No. 102 overall for iPhone revenue and No. 62 among top grossing games, Sensor Tower says. It’s also No. 48 for U.K. revenue. (It’s not yet ranked on Google Play.)

App Annie hasn’t yet put out numbers related to Harry Potter: Wizards Unite’s revenue, but the company tells us it hit No. 1 in the U.S. for downloads as of 12 AM on June 21, 2019. And for consumer spending, App Annie says the game broke into the top 100 grossing games by hitting No. 63 as of 7:00 AM June 21 on iPhone in the U.S.

The new game’s lesser demand compared with Pokémon GO could be attributed to a number of factors. Pokémon GO was hugely anticipated, had a massive fan base ready to download and was one of the first compelling use cases of AR in gaming.

Harry Potter’s fan base is active as well, but they’ve also had other games to play before now.

For example, Jam City has a Harry Potter: Hogwarts Mystery game that’s been getting a huge boost since yesterday’s news of the new Niantic title. That points to a case of mistaken identity or perhaps clever App Store SEO… or both.

It’s also worth noting the App Store itself has changed in the years since Pokémon GO’s launch.

In September 2017, Apple introduced its brand-new App Store that took the emphasis off its Top Charts as a means of discovery, and instead features apps in editorial “stories” on its Today tab. Within the dedicated apps and games section, the revamped App Store points users to editorial collections, with Top Charts only found upon scrolling down the page quite a bit.

We’ve heard from some developers that these changes reduced their downloads, as getting into the Top Charts doesn’t drive numbers like it used to. They said getting into the Today tab’s feature editorial doesn’t send as many installs, either. But this is all anecdotal — and of course, Apple doesn’t talk about numbers like this. Further investigation is needed.

In any event, the two app store intelligence firms — App Annie and Sensor Tower — both predict big numbers for the new Harry Potter title over time.

Sensor Tower estimates the game will pull in $400 million to $500 million in revenue in its first year. However, the firm notes that Harry Potter isn’t as popular in Asia — a market that delivers Pokémon GO over 40% of its revenue. 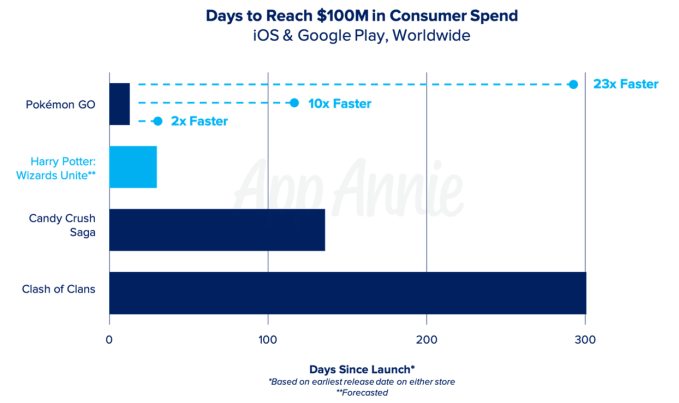