NFC — the technology that helps power Apple Pay as well other clever features for iOS apps like Launch Center Pro’s tappable stickers — is getting a big upgrade with the launch of iOS 13, due out this fall. Instead of only allowing iPhone apps to read NFC tags, apps will be able to write directly to blank tags, as well as interact with tags through native protocols. This opens up a range of new application possibilities, Apple told attendees at its Worldwide Developer Conference last week, including the ability to create apps that read passports and contactless smart cards and interact with NFC-enabled hardware.

We’ve already seen the potential for NFC that goes beyond just an easier way to check out at point-of-sale in a traditional retail environment, as with Apple Pay.

For example, both Apple and Google recently announced support for Apple Pay and Google Pay-enabled contactless payments for the NYC Subway. Portland offers something similar, as do several other international cities.

With the updates to the core NFC framework, however, the iPhone’s NFC capabilities will get even more powerful.

With iOS 13 (on iPhone 7 and up), users will be able to read a range of contactless smartcards and tags, including NFC-enabled passports and other government IDs.

There are already solutions in the works that will take advantage of this new feature.

For example, both Engadget Japan and Nikkei have reported the Japanese government will add support for NFC tag reading to Japan’s national ID (Individual Number Card) when iOS 13 launches later this year.

The news was confirmed by the Japanese government, via a tweet from an advisor to the government’s CIO:

In addition, the U.K. government’s NFC passport reader app, ReadID, will now work on the iPhone as a result of the iOS 13 updates.

“This announcement means that ReadID will also work on iPhones, using the embedded internal NFC capability,” the company said in a blog post.

“Needless to say we are very excited about this. We’re convinced this will have a major impact on the online use cases such as mobile onboarding for banks, especially for countries with a high iPhone penetration,” the announcement read.

Beyond ID-scanning, iOS apps will be able to write to NFC tags (i.e. NDEF writing), and even lock the tag so it can’t be written to again, if the developer chooses.

And now, the core NFC framework will support tag reading and writing across various formats, including not only NFC NDEF Tag (for NDEF tags, as offered today), but also Mifare, FeliCa, ISO 7816 (e.g. for passports), and ISO 15693.

That means NFC will work in more places with more type of tags than what’s available today. 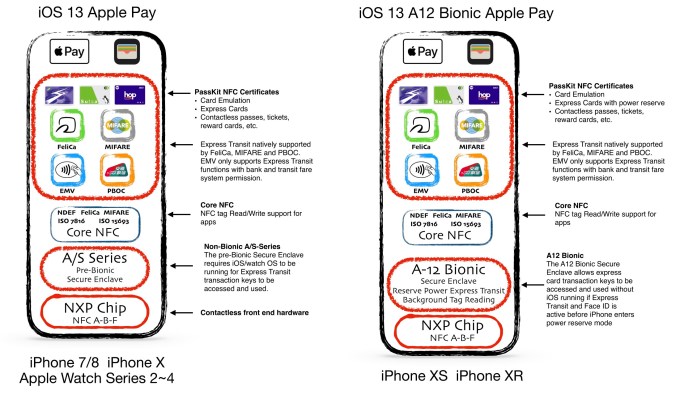 Apple had unveiled some of its plans around NFC by pre-announcing support for NFC stickers and tags that can trigger Apple Pay payments at the Transact conference in Las Vegas, just ahead of WWDC.

Bird (scooters), Bonobos (retailer) and PayByPhone (parking meters) said they would soon support this feature, which enables NFC transactions without a terminal or special app from the vendor.

Apple announced support for NFC stickers/tags that trigger Apple Pay for payment without having an app installed. Imagine tapping your phone on a scooter or a parking-meter and paying for it without signing up or downloading an app first. #ApplePay https://t.co/owgOsH3N7L pic.twitter.com/jpxUf7H6v6

This is enabled by way of new support for Value Added Service (VAS) tags, which also support loyalty sign-ups with merchants. On this front, Apple said that Dairy Queen, Dave & Buster’s and Caribou Coffee will later this year use NFC tags that make it easier for their customers to sign up for their loyalty programs.

At Apple’s WWDC, the company demonstrated NFC’s expanded abilities in a real-world scenario.

As an example of NFC in action on an iOS 13 device, the company showed off how a merchant could use NFC tags that displayed a product description after the customer scanned it, as well as how another NFC tag could offer the customer a coupon for their purchase, when scanned.

Launch Center Pro developer David Barnard, who had been selling NFC tags that were pre-encoded and locked so they couldn’t work with other apps beyond his own, is now unloading older inventory in preparation for iOS 13. The developer tweeted that his app will soon be able to write to blank NFC stickers, which you can buy in bulk on Amazon.

With iOS 13, @LaunchCenterPro will be able to write directly to blank NFC stickers you can buy in bulk on Amazon. So, we’ve discounted our current inventory below cost & will only be selling our app icon NFC stickers in the future. Get em while they last! https://t.co/CNSWvLl9Lb

In addition, the upgrade to Apple’s Siri Shortcuts app means users could kick off an action or even a multi-step workflow just by scanning an NFC tag.

Developers have wanted more NFC capabilities for some time, and Apple has delivered. Consumers may not understand the underlying technology or know what it’s called. However, they will get the “tap to interact” functionality thanks to broad Apple Pay adoption, which taught them the behavior.