Before there were Siri Shortcuts, there was Launch Center Pro — a clever iOS utility that for years has allowed iPhone users to automate more complex tasks by creating shortcuts. For example, you could search Yelp for the nearest coffee shop, jump straight to the camera in Instagram or message a loved one, among other things — and all right from a widget in the Notification Center. Now, the company has come up with a new twist on app automation. Instead of just widgets and buttons to tap, the app has rolled out support for NFC stickers.

NFC, if you’re unfamiliar, is the same technology that powers wireless payments, like Apple Pay.

And at long last, with the release of iOS 12 this fall, Apple opened up NFC capabilities to app developers. This means iPhone owners with newer model devices can tap NFC tags to trigger actions — like app launches. It currently works on iPhone XS, XS Max and XR. (iPhone 7 and newer can only use in-app NFC scanning, not NFC tags.)

Launch Center Pro was quick to take advantage of this new functionality by creating NFC tags of its own, in the form of stickers. 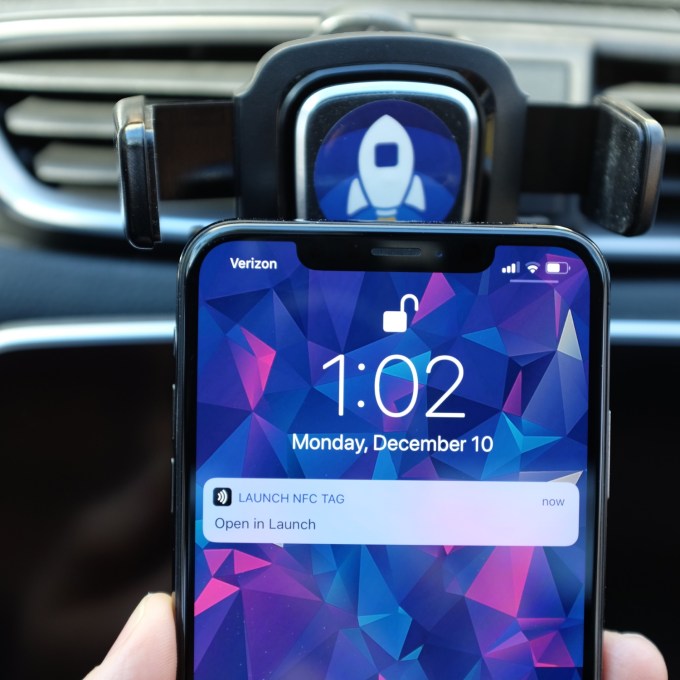 The stickers, which are sold online and in the app, add a physical link to digital tasks, explains Launch Center Pro developer David Barnard.

“I’ve heard it said that if your goal is to run every morning, put your running shoes next to your bed so you see them every morning,” he says. “You can still choose to not go running, but the shoes are a reminder of the commitment you made to yourself. Same with the stickers; they provide that extra visual cue to take action — even if you could accomplish the same thing without the sticker,” Barnard adds.

Plus, the stickers are also a faster way to launch your tasks, compared with swiping to view then tapping on the Today View Widget on your device.

During the beta, testers used the stickers for a variety of tasks, like launching directions to their next event from a sticker placed in the car, or one that sent their ETA to their loved one and launched directions home. Other testers put a sticker in the fridge to launch a shopping list to add new items to; or placed stickers around the home to trigger HomeKit shortcuts; or placed a sticker by their bedside to help them set alarms, and more.

Basically, anything you do all the time on your iPhone could be linked to one of the stickers.

The support for stickers is part of a broader 3.0 release, which also adds new features like themes, support for alternate app icons, advanced scheduling of tasks (tasks can now have multiple schedules), support for “Add to Siri” and more.

Notably, the app is now shifting to a free-to-use business model, where a one-time purchase or subscription will unlock all the features.

For those who bought the paid app in the past, you can continue to use the features you paid for without a subscription, and only have to purchase access to the new 3.0 features you want to use. These can be bought as a one-time purchase, if you choose.

For new users, the app is $9.99/year or $30 as a one-time purchase to unlock all the features. For any sort of automation fans, it’s a worthy investment in saving yourself time.