Two edtech companies, Zoobean and Unruly Studios, are the latest to receive investment from Amazon’s Alexa Fund — Amazon’s corporate venture fund focused on fueling innovation in voice technologies, and specifically, integrations with Amazon’s voice assistant Alexa. Zoobean, which you may recall from its Shark Tank appearance a few years ago, offers reading software to schools and libraries. And Unruly Studios, a 2018 Alexa Accelerator alum, connects STEM learning for kids with physical play.

Following its initial debut on Shark Tank, where it received investment from Mark Cuban, the company has continued to develop its software and expand its footprint. Today, Beanstack is licensed to more than 1,200 public libraries and schools worldwide, and is often referred to as the “Fitbit for reading” because of how it tracks and rewards progress.

Along with Alexa Fund, Cuban has also re-invested in the platform, joined by EAI Technologies, Jo and Elizabeth Tango, Pamela Bass-Bookey and Harry Bookey and Neil Jaffe of Booksource. The company didn’t share the round’s size, and Amazon declines to share the size of its Alexa Fund investments.

Zoobean is now exploring ways to integrate Alexa into Beanstack so readers can ask Alexa to track their progress or send them reminders about reading time. 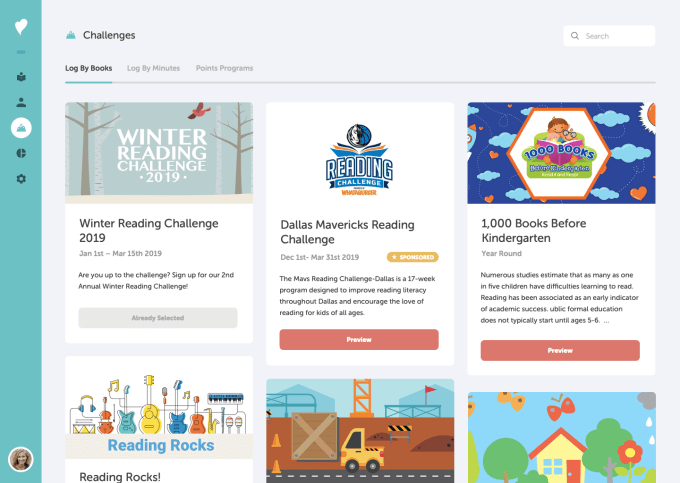 Unruly Studios, meanwhile, is approaching learning through play. Led by Bryanne Leeming, the team includes gaming veterans from Mattel, Nickelodeon, iRobot, Hasbro and elsewhere who have designed a product called Unruly Splats — a programmable floor tile that pairs with an app in order to allow kids to play recess-style games. For example, the tiles can be used for things like musical chairs, whack-a-mole, relay races and more.

The company participated in the Alexa Accelerator last year — in fact, they even connected Zoobean founder Felix Lloyd with the Alexa Fund, as it turns out. Unruly Studios is now exploring ways to connect its “Splats” with Alexa to make the experience more engaging, while also teaching kids programming fundamentals and voice design.

The Alexa Fund investment was part of its seed round of $1.8 million, which closed in April, also announced today. The round was led by eCoast Angels, and saw participation from new and existing investors including AT&T, Rough Draft Ventures powered by General Catalyst, Techstars, LearnLaunch, NextFab and other New England angel funds.

“We were so impressed by Unruly Studios during their time with the Alexa Accelerator last summer, and we’re thrilled to be reinvesting here as part of their seed round,” said Paul Bernard, director of the Alexa Fund, about Amazon’s investment. “Their ability to combine STEM education with physical games is inspiring on its own, and we see voice as a way to make that experience even more fun and engaging. We can’t wait to see what they build in the future.”

These aren’t the Alexa Fund’s first investments in edtech, however. Last fall, the fund invested in voice-based software and services company Bamboo Learning, for example. It also invested in Sphero, which more recently pivoted to education with Sphero Edu.

“One of the reasons I’m so optimistic about voice technology is because it creates this communal experience where multiple people can share in the interaction,” said Mark Cuban, in a statement about the Alexa Fund investments. “Every startup founder should be looking at how voice services like Alexa fit into their business model, and it’s great to see companies like Zoobean and Unruly take that to heart. I’m excited to see them evolve their products and use voice to make reading and STEM accessible to more people.”