The idea behind the accelerator is to help fuel early-stage companies developing for voice, giving Amazon an equity stake in the businesses.

The teams will participate in a three-month long accelerator program that culminates on October 9th with Demo Night, where they’ll present their business to venture capitalists and angel investors, and present their new Alexa experiences.

Amazon says it received hundreds of applications from 44 countries around the world for the 2018 program, and narrowed it down to nine it believes have the most potential.

During the accelerator program, the companies will improve their products, refine their business model, and develop for Alexa, while receiving mentorship from both Techstars and Amazon, as well as the broader Seattle community.

This year’s batch includes participation from the following:

Blutag seems especially relevant to Amazon’s interests, as its company is helping stores create voice-based shopping experiences for their customers. It aims to enable retailers to build a voice-based store without coding, allowing customers to shop by asking Alexa for a particular product, then receive personalized product suggestions over text or email. 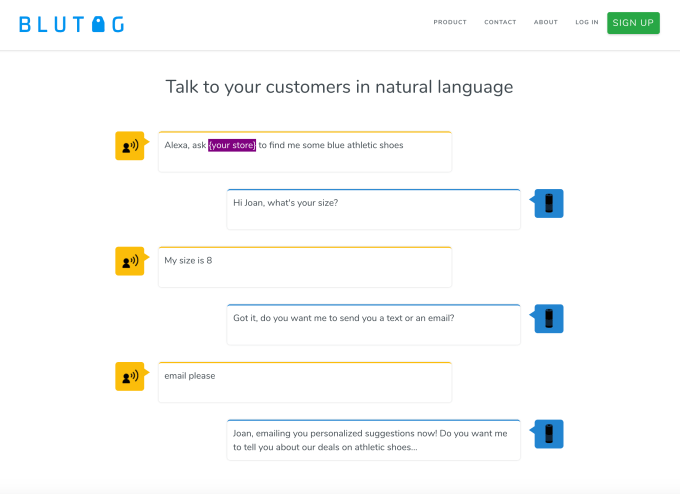 This startup is operating in the smart home space, offering a produce that connects to the home’s main water line to monitor household water use, in order to help homeowners gain money-saving insights and detect leaks.

HelixAI is taking Alexa to scientific laboratories. Not to be confused with genetic services marketplace Helix, this startup’s HelixAI digital assistant can respond to natural language queries to provide scientists and other others in lab settings with real-time information about their operating procedures, lab safety information, workflow and processes, and reference information. For example, you can ask HelixAI things like “what’s the boiling point of benzene?” or “What about the cut site for the restriction enzyme EcoRI?”

Imageous is expanding Alexa’s smart home capabilities to the “smart building.” Its smart facilities AI assistant for occupants of commercial buildings brings the benefits of AI technology to building operators. The AI can take advantage of system data (environmental), social data from the occupant population (if they’re reporting they’re hot, cold or comfortable), and external data sources (e.g weather or traffic data), to optimize the building for energy use and comfort with a focus on efficiency and cost savings.

Novalia offers a Bluetooth platform connected to paper-thin self-adhesive touch sensors that capture data through touch, in order to create immersive, touch-based experiences, Its audio platform then responds to touch, and turns it into audio through a surface sound actuator or line out. The company has worked with a number of brands on digital signage, touch-based posters, and other projects.

This company is developing AI-powered conversations for small businesses to replace phone calls for things like bookings. Currently it operates over text message, but an Alexa integration could translate this to voice. (A less troublesome version of Google’s Duplex, perhaps, as it doesn’t try to impersonate a human.)

Boston-based Unruly is combining STEM education with physical activity by building programmable, electronic floor tiles that kids can code, then jump on, and run around on to play interactive games. The startup includes former engineers from Hasbro, iRobot, Mattel and Rethink Robotics. 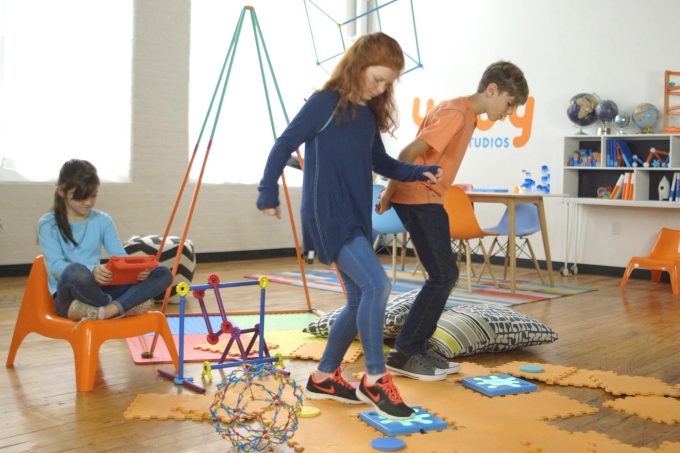 This company is working to make voice technology accessible, with the development of Automatic Speech Recognition technology (ASR) that allows people with severe speech impairments to communicate and be understood by voice. Customers train the software to understand their unique pronunciations, which it then translates into normalized speech output in the form of audio or text. The system can also be used to help people have face-to-face conversations.

A number of these companies in this cohort are more focused on supporting businesses, rather than consumers, using voice technology. That’s not surprising given Amazon’s recent interest in putting Alexa in the office and in hotels, for example.

Amazon’s Alexa Fund backs the participating startups with an initial $20,000 funding in return for a six percent equity stake. The startups also have the possibility of receiving another $100,000 as a convertible note.

However, there have been some concerns that along with the rewards, there are also risks for startups joining Amazon’s program. As The WSJ pointed out as did The Information, some entrepreneurs have taken a wary view of working with Amazon’s VC arm – especially after it led the Series A for home videoconferencing startup Nucleus, then proceeded to directly compete with it with the subsequent launch of the Echo Show.

But on the flip side, startups get an early peek at Amazon’s Alexa roadmap, and access to Amazon staff for help in developing Alexa skills.