Truecaller, an app that helps users screen strangers and robocallers, will soon allow users in India, its largest market, to borrow up to a few hundred dollars.

The crediting option will be the fourth feature the nine-year-old app adds to its service in the last two years. So far it has added to the service the ability to text, record phone calls and mobile payment features, some of which are only available to users in India. Of the 140 million daily active users of Truecaller, 100 million live in India.

The story of the ever-growing ambition of Truecaller illustrates an interesting phase in India’s internet market that is seeing a number of companies mold their single-functioning app into multi-functioning so-called super apps.

This may sound familiar. Truecaller and others are trying to replicate Tencent’s playbook. The Chinese tech giant’s WeChat, an app that began life as a messaging service, has become a one-stop solution for a range of features — gaming, payments, social commerce and publishing platform — in recent years.

WeChat has become such a dominant player in the Chinese internet ecosystem that it is effectively serving as an operating system and getting away with it. The service maintains its own “app store” that hosts mini apps. This has put it at odds with Apple, though the iPhone-maker has little choice but to make peace with it.

For all its dominance in China, WeChat has struggled to gain traction in India and elsewhere. But its model today is prominently on display in other markets. Grab and Go-Jek in Southeast Asian markets are best known for their ride-hailing services, but have begun to offer a range of other features, including food delivery, entertainment, digital payments, financial services and healthcare.

The proliferation of low-cost smartphones and mobile data in India, thanks in part to Google and Facebook, has helped tens of millions of Indians come online in recent years, with mobile the dominant platform. The number of internet users has already exceeded 500 million in India, up from some 350 million in mid-2015. According to some estimates, India may have north of 625 million users by year-end.

This has fueled the global image of India, which is both the fastest growing internet and smartphone market. Naturally, local apps in India, and those from international firms that operate here, are beginning to replicate WeChat’s model. 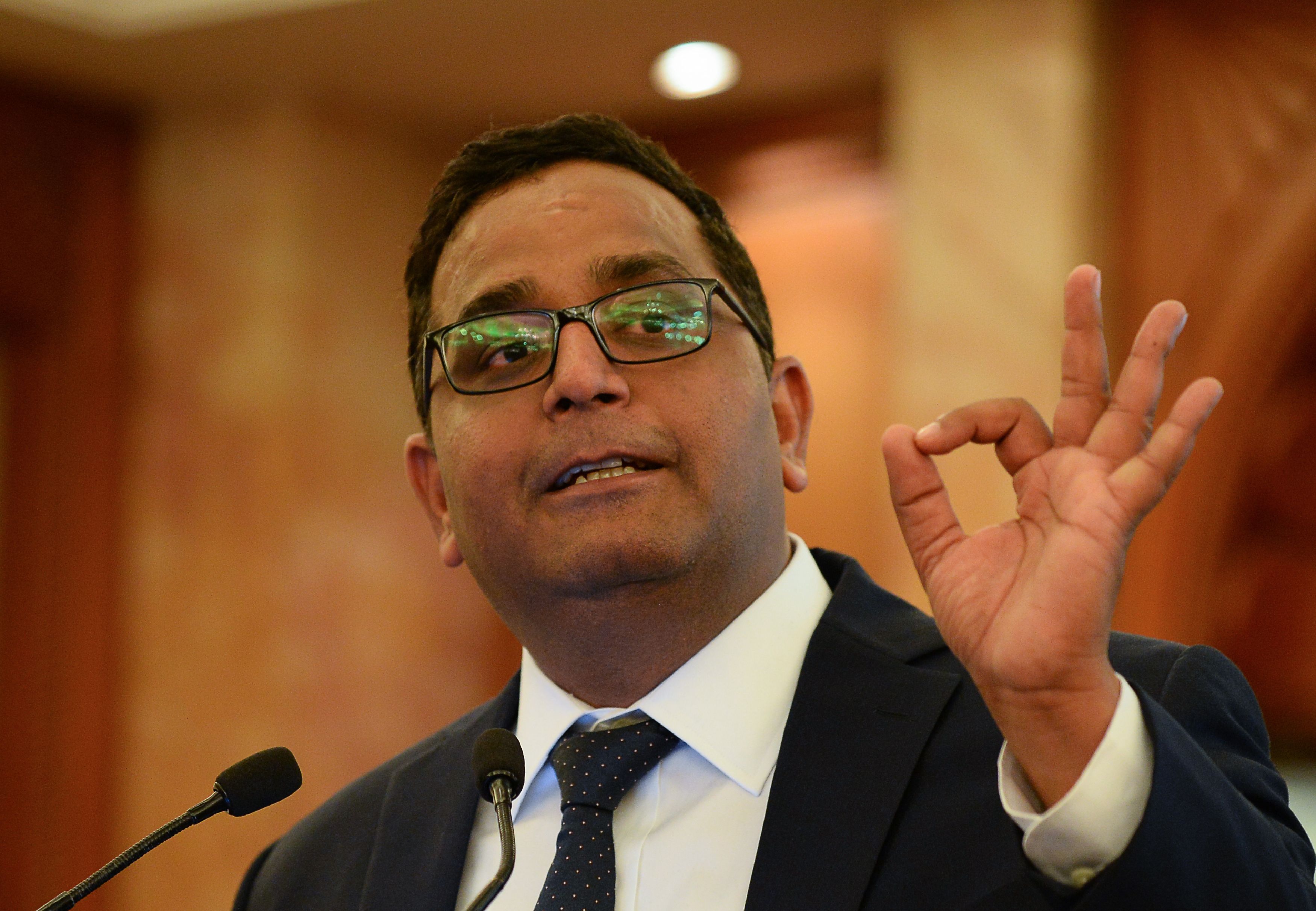 Leading that pack is Paytm, the popular homegrown mobile wallet service that’s valued at $18 billion and has been heavily backed by Alibaba, the e-commerce giant that rivals Tencent and crucially missed the mobile messaging wave in China.

In recent years, the Paytm app has taken a leaf from China with additions that include the ability to text merchants; book movie, flight and train tickets; and buy shoes, books and just about anything from its e-commerce arm Paytm Mall. It also has added a number of mini games to the app. The company said earlier this month that more than 30 million users are engaging with its games.

Why bother with diversifying your app’s offering? Well, for Vijay Shekhar Sharma, founder and CEO of Paytm, the question is why shouldn’t you? If your app serves a certain number of transactions (or engagements) in a day, you have a good shot at disrupting many businesses that generate fewer transactions, he told TechCrunch in an interview.

At the end of the day, companies want to garner as much attention of a user as they can, said Jayanth Kolla, founder and partner of research and advisory firm Convergence Catalyst.

“This is similar to how cable networks such as Fox and Star have built various channels with a wide range of programming to create enough hooks for users to stick around,” Kolla said.

“The agenda for these apps is to hold people’s attention and monopolize a user’s activities on their mobile devices,” he added, explaining that higher engagement in an app translates to higher revenue from advertising.

Paytm’s Sharma agrees. “Payment is the moat. You can offer a range of things including content, entertainment, lifestyle, commerce and financial services around it,” he told TechCrunch. “Now that’s a business model… payment itself can’t make you money.”

Other businesses have taken note. Flipkart-owned payment app PhonePe, which claims to have 150 million active users, today hosts a number of mini apps. Some of those include services for ride-hailing service Ola, hotel booking service Oyo and travel booking service MakeMyTrip. 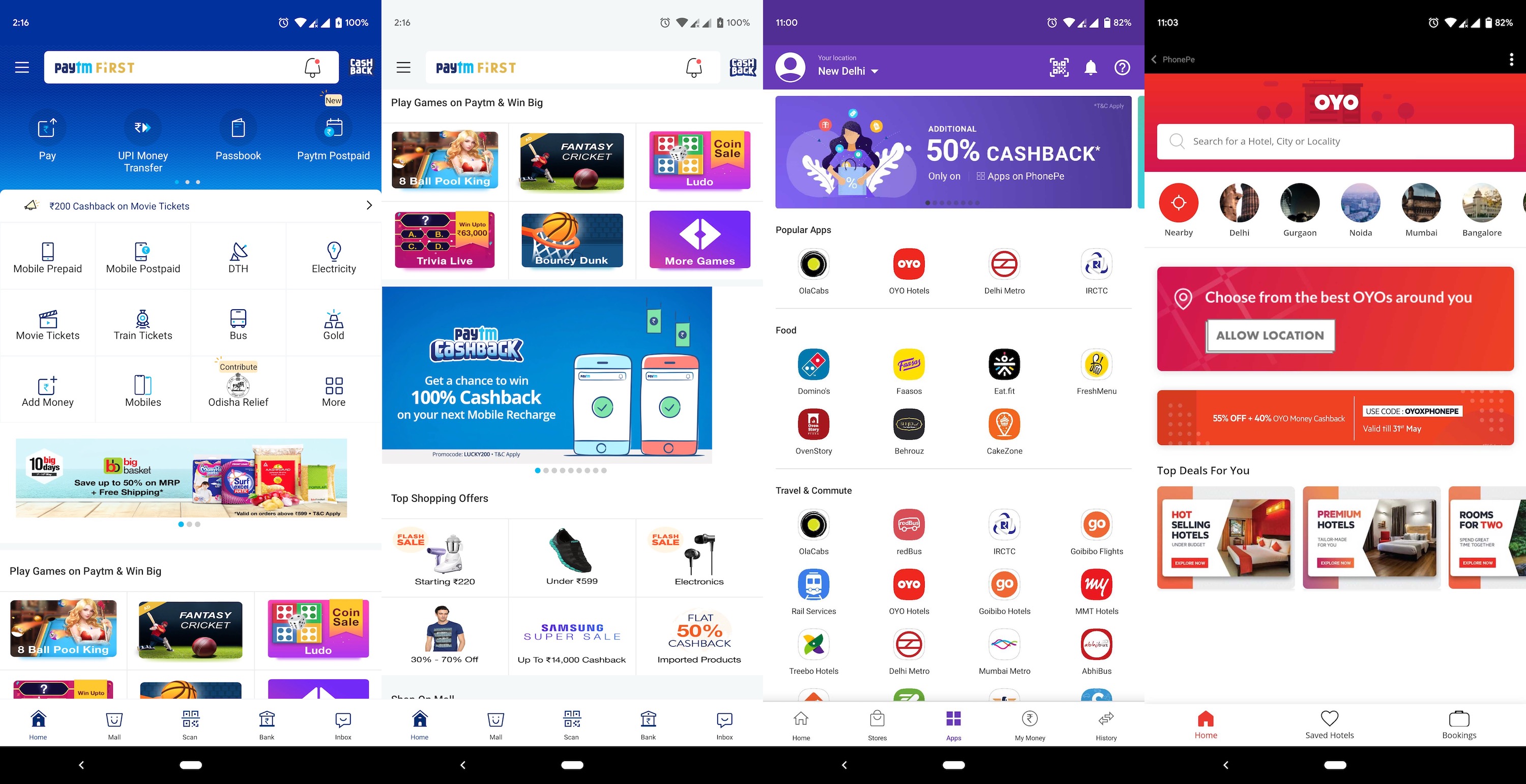 What works for PhonePe is that its core business — payments — has amassed enough users, Himanshu Gupta, former associate director of marketing and growth for WeChat in India, told TechCrunch. He added that unlike e-commerce giant Snapdeal, which attempted to offer similar offerings back in the day, PhonePe has tighter integration with other services, and is built using modern architecture that gives users almost native app experiences inside mini apps.

When you talk about strategy for Flipkart, the homegrown e-commerce giant acquired by Walmart last year for a cool $16 billion, chances are arch rival Amazon is also hatching similar plans, and that’s indeed the case for super apps.

In India, Amazon offers its customers a range of payment features such as the ability to pay phone bills and cable subscription through its Amazon Pay service. The company last year acquired Indian startup Tapzo, an app that offers integration with popular services such as Uber, Ola, Swiggy and Zomato, to boost Pay’s business in the nation.

Another U.S. giant, Microsoft, is also aboard the super train. The Redmond-based company has added a slew of new features to SMS Organizer, an app born out of its Microsoft Garage initiative in India. What began as a texting app that can screen spam messages and help users keep track of important SMSs recently partnered with education board CBSE in India to deliver exam results of 10th and 12th grade students.

This year, the SMS Organizer app added an option to track live train schedules through a partnership with Indian Railways, and there’s support for speech-to-text. It also offers personalized discount coupons from a range of companies, giving users an incentive to check the app more often.

Like in other markets, Google and Facebook hold a dominant position in India. More than 95% of smartphones sold in India run the Android operating system. There is no viable local — or otherwise — alternative to Search, Gmail and YouTube, which counts India as its fastest growing market. But Google hasn’t necessarily made any push to significantly expand the scope of any of its offerings in India.

India is the biggest market for WhatsApp, and Facebook’s marquee app too has more than 250 million users in the nation. WhatsApp launched a pilot payments program in India in early 2018, but is yet to get clearance from the government for a nationwide rollout. (It isn’t happening for at least another two months, a person familiar with the matter said.) In the meanwhile, Facebook appears to be hatching a WeChatization of Messenger, albeit that app is not so big in India.

Ride-hailing service Ola too, like Grab and Go-Jek, plans to add financial services such as credit to the platform this year, a source familiar with the company’s plans told TechCrunch.

“We have an abundance of data about our users. We know how much money they spend on rides, how often they frequent the city and how often they order from restaurants. It makes perfect sense to give them these valued-added features,” the person said. Ola has already branched out of transport after it acquired food delivery startup Foodpanda in late 2017, but it hasn’t yet made major waves in financial services despite giving its Ola Money service its own dedicated app.

The company positioned Ola Money as a super app, expanded its features through acquisition and tie ups with other players and offered discounts and cashbacks. But it remains behind Paytm, PhonePe and Google Pay, all of which are also offering discounts to customers. 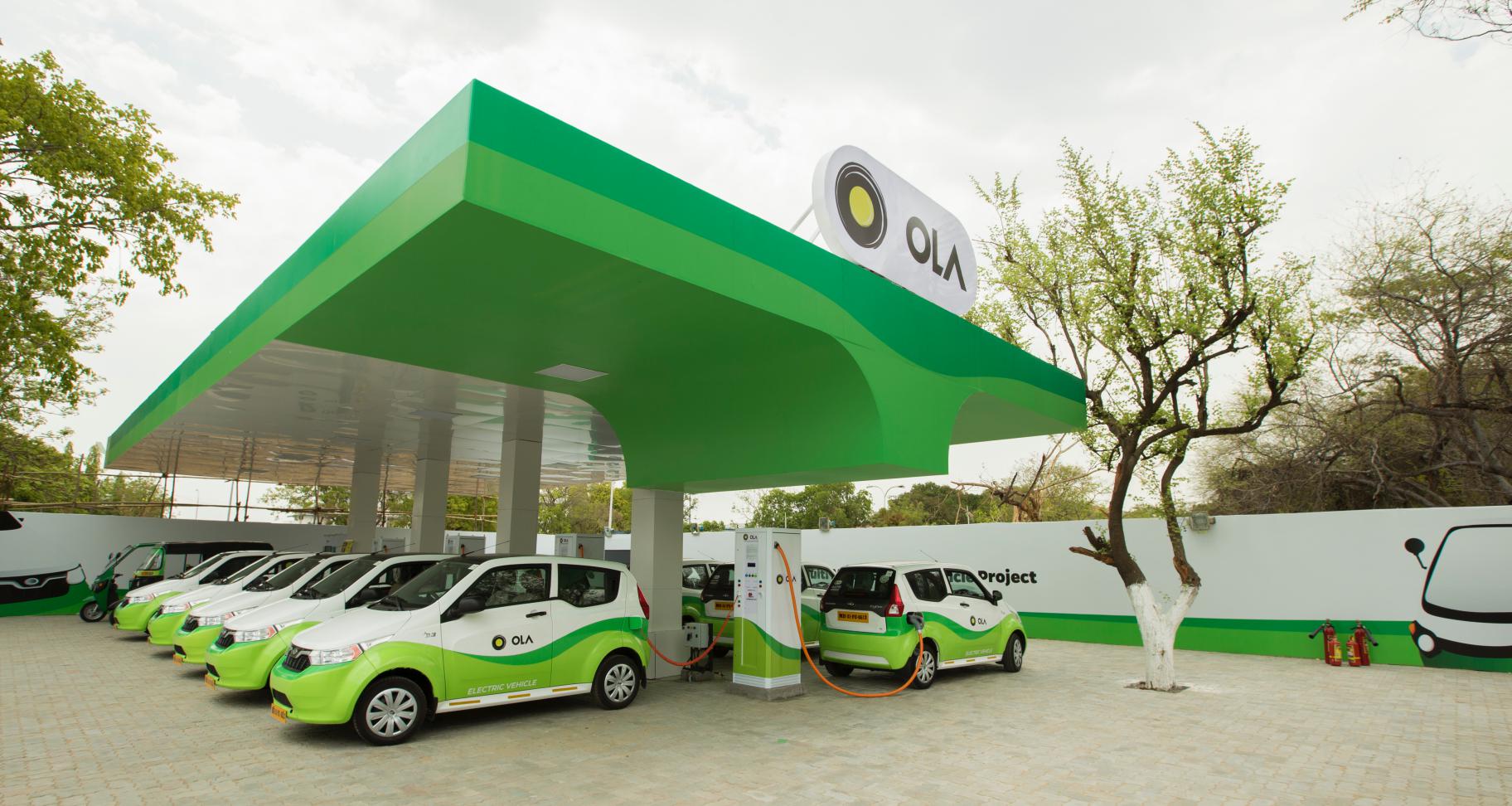 Super apps indeed come in all shapes and sizes, beyond core services like payment and transportation — the strategy is showing up in apps and services that entertain India’s internet population.

MX Player, a video playback app with more than 175 million users in India that was acquired by Times Internet for some $140 million last year, has big ambitions. Last year, it introduced a video streaming service to bolster its app to grow beyond merely being a repository. It has already commissioned the production of several original shows.

In recent months, it has also integrated Gaana, the largest local music streaming app that is also owned by Times Internet. Now its parent company, which rivals Google and Facebook on some fronts, is planning to add mini games to MX Player, a person familiar with the matter said, to give it additional reach and appeal.

Some of these apps, especially those that have amassed tens of millions of users, have a real shot at diversifying their offerings, analyst Kolla said. There is a bar of entry, though. A huge user base that engages with a product on a daily basis is a must for any company if it is to explore chasing the super app status, he added.

Indeed, there are examples of companies that had the vision to see the benefits of super apps but simply couldn’t muster the requisite user base. As mentioned, Snapdeal tried and failed at expanding its app’s offerings. Messaging service Hike, which was valued at more than $1 billion two years ago and includes WeChat parent Tencent among its investors, added games and other features to its app, but ultimately saw poor engagement. Its new strategy is the reverse: to break its app into multiple pieces.

“In 2019, we continue to double down on both social and content but we’re going to do it with an evolved approach. We’re going to do it across multiple apps. That means, in 2019 we’re going to go from building a super app that encompasses everything, to Multiple Apps solving one thing really well. Yes, we’re unbundling Hike,” Kavin Mittal, founder and CEO of Hike, wrote in an update published earlier this year.

It remains unclear how users are responding to the new features on their favorite apps. Some signs suggest, however, that at least some users are embracing the additional features. Truecaller said it is seeing tens of thousands of users try the payment feature for the first time each day. It’s also being used to send 3 billion texts a month.

And Reliance Jio, of course

Regardless, the race is still on, and there are big horses waiting to enter to add further competition.

Reliance Jio, a subsidiary of conglomerate Reliance Industry that is owned by India’s richest man, Mukesh Ambani, is planning to introduce a super app that will host more than 100 features, according to a person familiar with the matter. Local media first reported the development.

It will be fascinating to see how that works out. Reliance Jio, which almost single-handedly disrupted the telecom industry in India with its low-cost data plans and free voice calls, has amassed tens of millions of users on the bouquet of apps that it offers at no additional cost to Jio subscribers.

Beyond that diverse selection of homespun apps, Reliance has also taken an M&A-based approach to assemble the pieces of its super app strategy.

It bought music streaming service Saavn last year and quickly integrated it with its own music app JioMusic. Last month, it acquired Haptik, a startup that develops “conversational” platforms and virtual assistants, in a deal worth more than $100 million. It already has the user bases required. JioTV, an app that offers access to over 500 TV channels; and JioNews, an app that additionally offers hundreds of magazines and newspapers, routinely appear among the top apps in Google Play Store.

India’s super app revolution is in its early days, but the trend is surely one to keep an eye on as the country moves into its next chapter of internet usage.