Sweden’s Truecaller started out life as a service that screens calls and messages to weed out spammers. In recent times the company has switched its focus to India, its largest market based on users, adding services that include payments to make it more useful. Now Truecaller is putting even more weight behind its India push after it announced its first acquisition, mobile payment service Chillr.

The vision is to go deeper into mobile payments and associated services to turn Truecaller into a utility that goes beyond just handling messages and calls, particularly payments — a space that WhatsApp is preparing to enter in India.

Truecaller doesn’t have WhatsApp-like scale — few companies can match 200 million active users in India, but it did recently disclose that it has 100 million daily active users worldwide, while India is its largest country with 150 million registered users.

Truecaller has raised over $90 million from investors to date, according to Crunchbase. TechCrunch reported in 2015 that it was in talks to raise $100 million at a valuation of around $1 billion, but a deal never happened. Truecaller has instead raised capital from Swedish investment firm Zenith. Chillr, which offer payment services between over 50 banks, had raised $7.5 million from the likes of Blume Ventures and Sequoia Capital.

Truecaller isn’t disclosing how much it has paid for the deal, but it said that Chillr’s entire team of 45 people will move over and the Chillr service will be phased out. In addition, Chillr CEO Sony Joy will become vice president of Truecaller Pay, running that India-based payment business which will inherit Chillr’s core features.

“We’ve acquired a company that is known for innovation and leading this space in terms of building a fantastic product,” Truecaller co-founder and CSO Nami Zarringhalam told TechCrunch in an interview.

Zarringhalam said the Truecaller team met with Chillr as part of an effort to reach out to partners to build out an ecosystem of third-party services, but quickly realized there was potential to come together.

“We realized we shared synergies in thought processes for caring for the customer and user experience,” he added, explaining that Joy and his Chillr team will “take over the vision of execution of Truecaller Pay.” 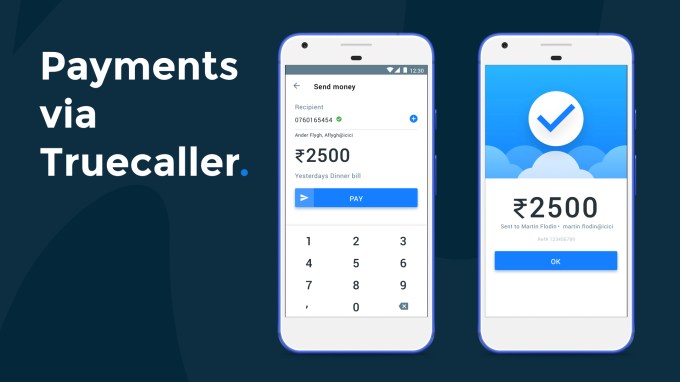 Joy told TechCrunch that he envisages developing Truecaller Pay into one of India’s top three payment apps over the next two years.

Already, the service supports peer-to-peer payments following a partnership with ICICI Bank, but there are plans to layer on additional services from third parties. That could include integrations to provide services such as loans, financing, micro-insurance and more.

Joy pointed out that India’s banking push has seen many people in the country sign up for at least one account, so now the challenge is not necessarily getting banked but instead getting access to the right services. Thanks to gathering information through payments and other customer data, Truecaller could, with permission from users, share data with financial services companies to give users access to services that wouldn’t be able to access otherwise.

“Most citizens have a bank account (in each household), now being underserved is more to do with access to other services,” he explained.

Joy added that Truecaller is aiming to layer in value-added services over its SMS capabilities, digging into the fact that SMS remains a key communication and information channel in India. For example, helping users pay for items confirmed via SMS, or pay for an order which is tracked via SMS.

The development of the service in India has made it look from the outside that the company is splitting into two, a product localized for India and another for the rest of the world. However, Zarringhalam said that the company plans to replicate its approach — payments and more — in other markets.

“It could be based on acquisitions or partners, time will tell,” he said. “But our plan is to develop this for all markers where our market penetration is high and the market dynamics are right.”

Truecaller has raised over $90 million from investors to date, according to Crunchbase. TechCrunch reported in 2015 that it was in talks to raise $100 million at a valuation of around $1 billion, but a deal never happened. Truecaller has instead raised capital from Swedish investment firm Zenith.