India finally has its answer to Spotify after Reliance Jio merged its music service with Saavn, the startup it acquired earlier this year.

The deal itself isn’t new — it was announced back in March — but it has reached its logical conclusion after two apps were merged to create a single entity, JioSaavn, which is valued at $1 billion. For the first time, India has a credible rival to global names like Spotify and Apple Music through the combination of a venture capital-funded business, Saavn, and good old-fashioned telecom, JioMusic from Reliance’s disruptive Jio operator brand.

This merger deal comes days after reports suggested that Spotify is preparing to (finally) enter the Indian market, a move that has been in the planning for more than a year as we have reported.

That would set up an interesting battle between global names Spotify and Apple and local players JioSaavn and Gaana, a project from media firm Times Internet, which is also backed by China’s Tencent.

It isn’t uncommon to see international firms compete in Asia — Walmart and Amazon are the two major e-commerce players, while Chinese firms Alibaba and Tencent have busily snapped up stakes in promising internet companies for the past couple of years — but that competition has finally come to the streaming space.

There have certainly been misses over the years.

Early India-based pioneer Dhingana was scooped by Rdio back in 2014, having initial shut down its service due to financial issues. Ultimately, though, Rdio itself went bankrupt and was sold to Pandora, leaving both Rdio and Dhingana in the startup graveyard.

Saavn, the early competitor to Dhingana, seemed destined to a similar fate, at least from the outside. But it hit the big time in 2015 when it raised $100 million from Tiger Global, the New York hedge fund that made ambitious bets on a number of India’s most promising internet firms. That gave it the fuel to reach this merger deal with JioMusic.

Unlike Dhingana’s fire sale, Saavn’s executive team continues on under the JioSaavn banner.

The coming-together is certainly a far more solid outcome than the Rdio deal. JioSaavn has some 45 million songs — including a slate of originals started by Saavn — and access to the Jio network, which claims more than 250 million subscribers. 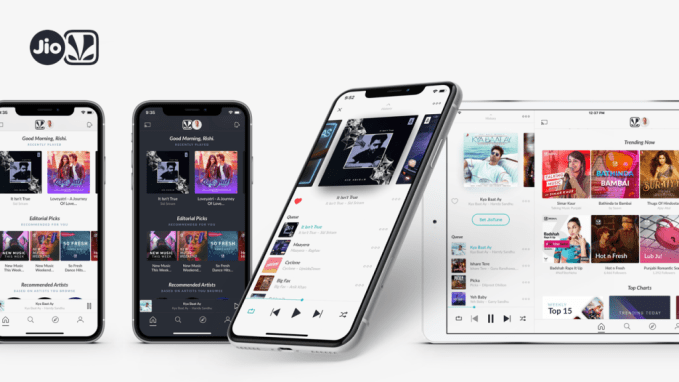 JioSaavn is available across iOS, Android, web and Reliance Jio’s own app store

The JioMusic service will be freemium, but Jio subscribers will get a 90-day trial of the ad-free “Pro” service. The company maintains five offices — including outposts in Mountain View and New York — with more than 200 employees, while Reliance has committed to pumping $100 million into the business for “growth and expansion of the platform.”

While it is linked to Reliance and Jio, JioMusic is a private business that counts Reliance as a stakeholder. You’d imagine that remaining private is a major carrot that has kept Saavn founders — Rishi Malhotra, Paramdeep Singh and Vinodh Bhat — part of the business post-merger.

The window certainly seems open for streaming IPOs — Spotify went public this past April through an unconventional listing that valued its business around $30 billion, while China’s Tencent Music is in the process of a listing that could raise $1.2 billion and value it around that $30 billion mark, too. JioSaavn might be the next streamer to test the public markets.