Facebook’s gaming efforts and challenge to Twitch are taking another big leap today, as the social network begins the initial rollout of a dedicated Facebook Gaming tab in the main navigation of Facebook’s app. The goal with the new addition is to help people more easily find games, streamers and gaming groups they follow, as well as discover new content, based on their interests.

After clicking the new Gaming tab, there will be a feed of content that points to instant games you can play with friends; videos to watch from top streamers, esports organizations and game publishers; and updates from your various gaming groups, the company says.

The new Facebook Gaming tab builds on the gaming video destination the site launched last year as Fb.gg. That hub had offered a collection of all the video games streaming on Facebook, and a way for gamers and fans to interact. As a top-level navigation item, Facebook’s new Gaming tab will now further extend the gaming hub’s reach. 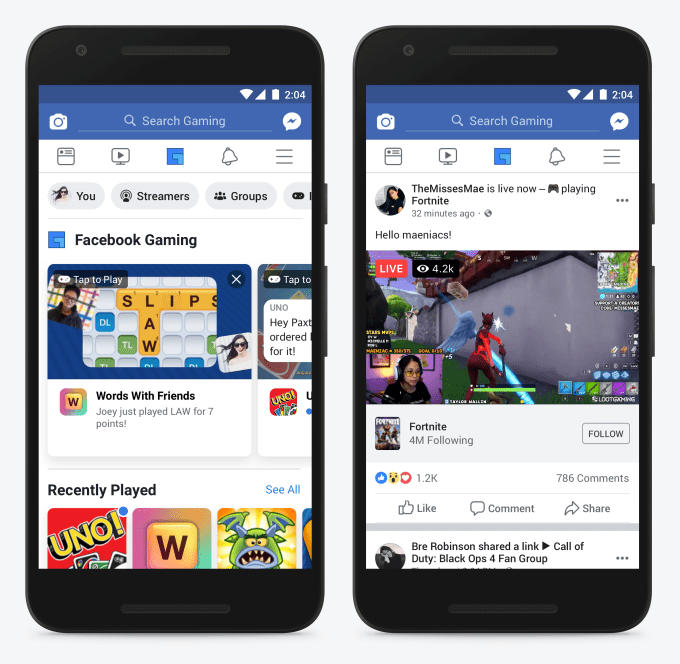 While Twitch and YouTube are today dominating the gaming space, Facebook’s advantage — beyond its scale — is its promise of a reduced cut of transactions. On Fb.gg, gamers were able to attract new fans with the aid of Facebook’s personalized recommendations based on users’ activity, and then monetize those viewers through a virtual tipping mechanism.

Facebook’s cut of those tips ranges from 5 to 30 percent, with the cut getting smaller when users buy larger packs of the virtual currency. Meanwhile, Facebook’s fan subscriptions payments for streamers also see it taking a cut of up to 30 percent, the same as YouTube but smaller than Twitch’s roughly 50 percent.

That could potentially attract streamers who want to maximize their earnings and believe they can port their audience over to a new destination. Of course, some streamers may not trust Facebook to maintain those same percentages over time, nor believe it will ever offer the sorts of features and innovations that a more focused gaming destination like Twitch can.

Facebook also last year experimented with making its gaming hub mobile with the launch of Fb.gg as a standalone mobile app.

The app, like the web-based gaming hub, offered a way for gamers and fans to discover content, join communities and even play instant games like Everwing, Words with Friends, Basketball FRVR and others.

However, the strategy of keeping Facebook’s Gaming efforts more separated from Facebook’s main site may not have paid off — the Fb.gg Android app, for example, only has some 100,000+ installs according to Google Play.

YouTube in September said it was giving its Gaming hub a new home right on the YouTube homepage, and would shut down its standalone Gaming app. (The latter doesn’t seem to have occurred, however). As YouTube noted, gaming was a popular category, but the majority of viewers weren’t looking for a separate app or experience — they were just visiting YouTube directly.

That said, Facebook is continuing its tests on mobile with a standalone (rebranded) Facebook Gaming app on Android, which will have more features that the Gaming tab.

Facebook says it will roll out the Gaming tab to a subset of the more than 700 million Facebook game fans, and will expand it over time to more gaming enthusiasts across the network. If you don’t see the new tab in your main navigation bar, you can still find it by going to the Bookmarks menu on Facebook.