The next phase of social media is about hanging out together while apart. Rather than performing on a live stream or engaging with a video chat, Instagram may allow you to chill and watch videos together with a friend. Facebook already has Watch Party for group co-viewing, and in November we broke the news that Facebook Messenger’s code contains an unreleased “Watch Videos Together” feature. Now Instagram’s code reveals a “co-watch content” feature hidden inside Instagram Direct Messaging.

It’s unclear what users might be able to watch simultaneously, but the feature could give IGTV a much-needed boost, or just let you laugh and cringe at Instagram feed videos and Stories. But either way, co-viewing could make you see more ads, drive more attention to creators that will win Instagram their favor or just make you rack up time spent on the app without forcing you to create anything. [Update 4/17/19: Wong has now managed to generate screenshots of the new Instagram Direct co-watching feature, which lets you select from an array of recommended Instagram feed videos to view with a friend. Your faces are shown at the bottom of the screen so you can see each other’s reactions. Instagram is also prototyped bringing its augmented reality filters to Direct message video chats.

The Instagram co-watch code was discovered by TechCrunch’s favorite tipster and reverse-engineering specialist Jane Manchun Wong, who previously spotted the Messenger Watch Together code. Her past findings include Instagram’s video calling, music soundtracks and Time Well Spent dashboard, months before they were officially released.

The code mentions that you can “cowatch content” that comes from a “Playlist” similar to the queues of videos Facebook Watch Party admins can tee up. Users could also check out “Suggested” videos from Instagram, which would give it a new way to promote creators or spawn a zeitgeist moment around a video. It’s not certain whether users will be able to appear picture-in-picture while watching so friends can see their reactions, but that would surely be more fun. 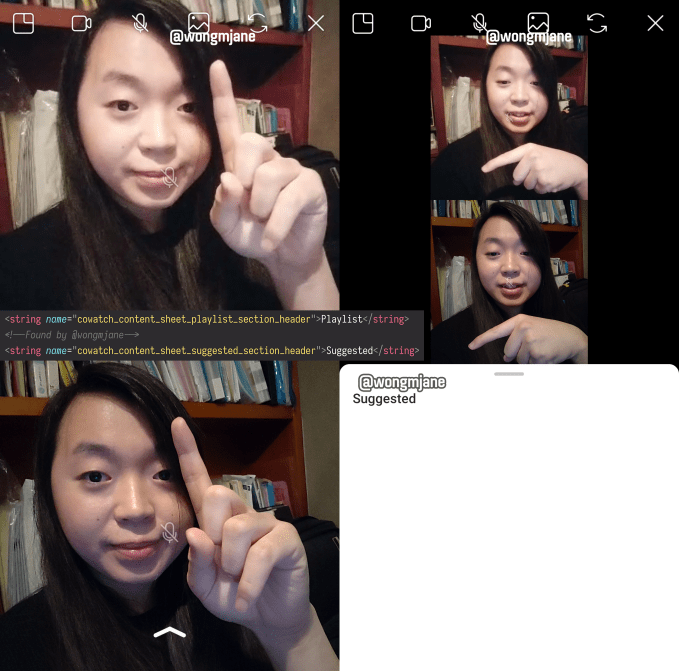 Instagram declined to comment on the findings, which is typical of the company when a feature has been prototyped internally but hasn’t begun externally testing with users. At this stage, products can still get scrapped or take many months or even more than a year to launch. But given Facebook’s philosophical intention to demote mindless viewing and promote active conversation around videos, Instagram co-watching is a sensible direction.

Facebook launched Watch Party to this end back in July, and by November, 12 million had been started from Groups and they generated 8X more comments than non-synced or Live videos. That proves co-watching can make video feel less isolating. That’s important as startups like Houseparty group video chatrooms and Squad screenshare messaging try to nip at Insta’s heels. 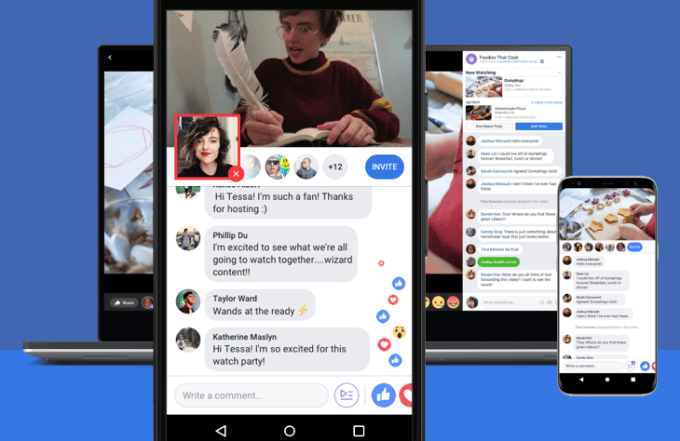 Speaking of the Instagram founders Kevin Systrom and Mike Krieger, this article’s author Josh Constine will be interviewing them on Monday 3/11 at SXSW. Come see them at 2 pm in the Austin Convention Center’s Ballroom D to hear about their thoughts on the creator economy, why they left Facebook and what they’ll do next. Check out the rest of TechCrunch’s SXSW panels here, and RSVP for our party on Sunday.