Livestreaming doesn’t have to be a big performance or a one-on-one video call. Just ask the one million people who spend 20 million minutes hanging out each day on group video chat app Houseparty, the latest teen app phenomenon.

Built from the ashes of Meerkat, Houseparty is leading the charge for a new kind of synchronous social networking. It’s the closest thing to being with friends in person.

Instead of posting to a feed and waiting for Likes, or slinging texts and media back and forth over messaging, Housepartying happens Live. But rather than make one person the center of attention, Houseparty splits the screen up to 8 times so everyone can talk and laugh together.

Houseparty’s founder Ben Rubin told me he sees the app as the Internet’s living room. But that’s too solitary of a metaphor. The big differentiator from other group video apps like Google Hangouts is that you don’t have to request people to join you, like inviting them to your home. You just get online, and you’re instantly “in the house” partying with any other friends with the app open.

That’s why Houseparty is the Internet’s closest version of what sociologists call “the third place“.

The first place is your home, intimate but isolated. The second place is your office, social but formal and full of responsibility. The third place is the coffeehouse, the bar, the mall — a public space for relaxing, socializing, sharing ideas, or goofing off. It can be a psychologically recuperative escape from the rigors of the rest of life. 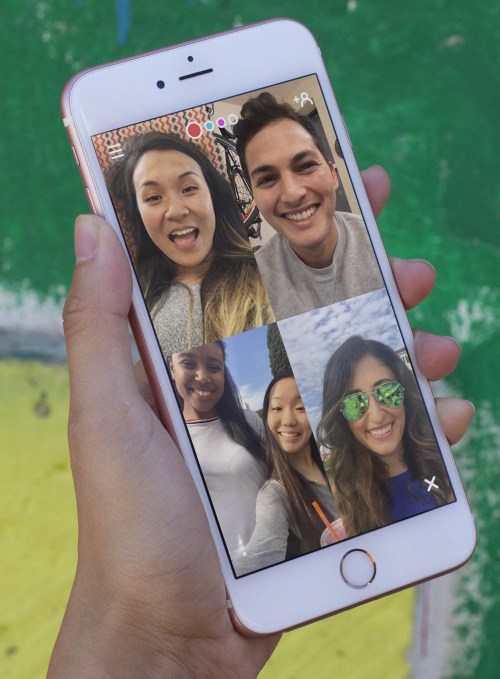 Online, third places often emerge rather than being created intentionally. Inside massively multiplayer online role-playing games like World Of Warcraft, some people prefer to login and see who’s around to hang out with rather than immediately plunging into battle. And virtual worlds like Second Life or Altspace see users dropping in and out of online communities rather than building make-believe homes or consuming content.

Houseparty has purposefully created a third place that harnesses the distributed accessibility of the Internet with your real-life social graph mined from your phone book. The result is a way to gather without moving, to simply be social online without the pressure to create.

Teens and young adults have plenty of time and a deep desire to congregate with their many friends, but may be disempowered by their lack of self-directed agency, transportation, or home ownership. That’s why Houseparty is taking off with people under the age of 24, who make up over 60% of its users.

The app is certainly novel, leading to a huge spike to #3 on the overall iOS app charts in May. But it’s proving to have staying power. Houseparty was back up at #29 this week, and in the few days since talking to the company, it’s now climbed to 1.2 million daily users. The synchronous nature means network effect is everything. Each additional user makes the app significantly more valuable to their friends, so we could see a snowball effect if Houseparty can keep things interesting. 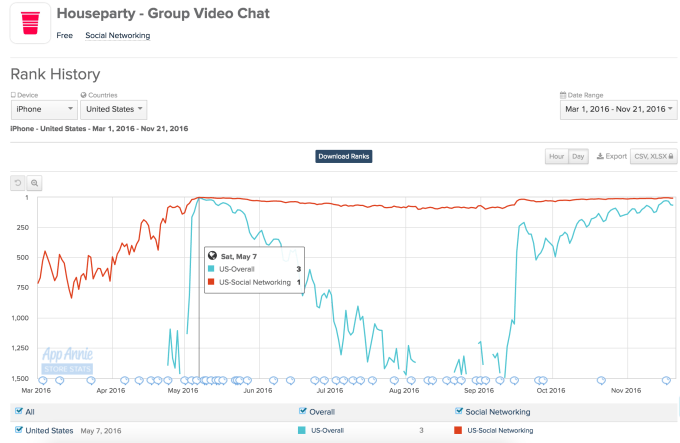 And if it can keep the servers online. Houseparty’s parent company Life On Air shrunk its team from 36 down to 11 now after pivoting from its livestreaming app Meerkat. It needed to stretch its $14 million Series B funding from Greylock. 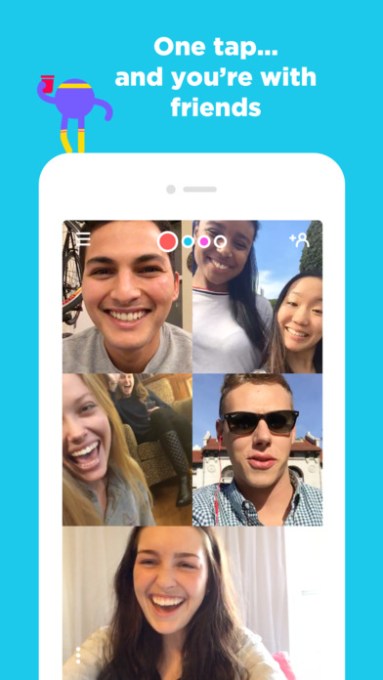 Rubin realized Meerkat wasn’t going to beat Periscope and Facebook Live at their own broadcasting game. They had the money and connections to recruit celebrity streamers and focus on premium content output. So Life On Air cut costs and headcount while building Houseparty as an app for normal people on camera, focusing on a frequently used input experience.

That’s what will make Houseparty hard for Facebook, Instagram, Twitter, and Snapchat to copy. Houseparty’s synchronous live experience only works if you join the party the second you open the app. It can’t be bolted on as an after thought, the way Instagram tells me it’s thinking about building Live video into its Direct group messaging feature. It’s tough to imagine these giant competitors pivoting so drastically as to put synchronous group video chat front and center.

That leaves Houseparty as the place to be.