Roku has just made a bad decision with regard to its growing advertising business by associating its brand with the toxic conspiracy theorist, Alex Jones. As Digiday first reported this morning, Roku has chosen to add to the Roku platform as a supported channel the Infowars live show hosted by Jones, much to the disgust of customers now hammering the company on its social media platforms.

The company, apparently, is opting for the “we’re a neutral platform” defense in the matter, despite the fact that most major platforms have backed away from this stance with regard to Jones.

The decision to allow the channel comes at a time when Jones and Infowars are in the headlines again because of a recent update in the legal battle between the Sandy Hook families and the Infowars program. The families are suing the conspiracy theorist for spreading the false claim that the school shooting was an elaborate hoax, and that Infowars peddled these stories to stoke fear and sell more products like survivalist gear and gun paraphernalia, The New York Times reports.

A judge has ordered Infowars to turn over to the families internal documents that relate to its business plan or marketing strategies, the shooting itself, crisis actors or mass shootings in general.

Roku’s decision to allow the channel at all is a poor one not only in terms of taking a moral stance on complicated matters (if you’re of the mindset that’s something companies should do) — it seems to go against Roku’s own policy that bans content which is “unlawful, incites illegal activities or violates third-party rights.”

This is the same general premise that saw Infowars banned everywhere else.

Because of Jones’ claims, the Sandy Hook families have received death threats and have been continually harassed, even offline. Jones has also promoted other theories that led to violence, like Pizzagate.

Roku’s position, seemingly, is that the channel hasn’t done any bad stuff yet on its platform, never mind its past.

Such a cynical move by @Roku here. In light of very public lawsuits against him by the Sandy Hook parents who’ve been targeted by him, why would they decide now to stream his show? https://t.co/FkUrdzPLMD

Many Roku customers on social media are threatening to boycott. A search for terms including “roku,” “boycott” and others related to the news are picking up speed on Twitter, the #boycottroku hashtag has just now re-appeared, as well. (It was used previously by customers protesting the NRA channel.)

Given Amazon Fire TV and Roku’s tight race and Roku’s hunt for ad revenue through newer initiatives like its Roku Channel, a boycott could have material impact. (It looks like Amazon picked the right day to launch its updated Fire TV Stick with the new Alexa remote. At $40, it’s not going to be hard for consumers to switch streamers, if it comes to that. A search for “infowars” in Amazon Fire TV apps is not currently returning results, if you’re curious.)

Roku has become one of the top streaming media device makers in the U.S. and globally, recently having reached nearly 24 million registered users. Digiday notes that it’s projected to generate $293 million in advertising in 2018, per eMarketer, putting it just behind Hulu.

Apparently, Roku believes it can distance itself from the content it hosts on its platform.

That’s not a good look for advertisers, however, many who won’t want their brand appearing anywhere near Infowars. And because Roku runs ads right on its homescreen, that means advertisers’ content can actually sit directly beside the Infowars channel icon, if not in the program itself. 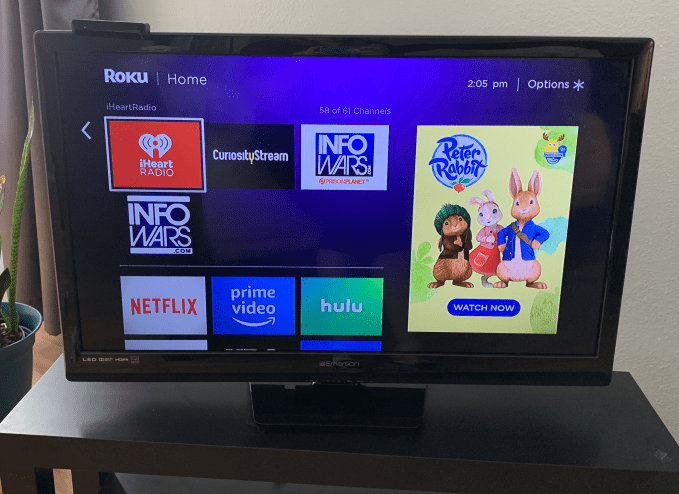 It may also make advertisers hesitant to work with Roku on other initiatives because it shows a lack of understanding over how to manage brand safety, or because they fear a consumer backlash.

Roku’s full statement is below:

Our streaming platform allows our customers to choose from thousands of entertainment, news and special interest channels, representing a wide range of topics and viewpoints. Customers choose and control which channels they download or watch, and parents can set a pin to prevent channels from being downloaded. While the vast majority of all streaming on our platform is mainstream entertainment, voices on all sides of an issue or cause are free to operate a channel. We do not curate or censor based on viewpoint.

We are not promoting or being paid to distribute InfoWars. We do not have a commercial relationship with the InfoWars.

While open to many voices, we have policies that prohibit the publication of content that is unlawful, incites illegal activities or violates third-party rights, among other things. If we determine a channel violates these policies, it will be removed. To our knowledge, InfoWars is not currently in violation of these content policies.

Following Roku’s statement about its decision, Josh Koskoff, the Koskoff, Koskoff & Bieder attorney representing several Sandy Hook families suing Jones after his repeated claims that the Sandy Hook massacre was a hoax, has released a statement as well:

Roku’s shocking decision to carry Infowars and provide a platform for Alex Jones is an insult to the memory of the 26 children and educators killed at Sandy Hook. Worse, it interferes with families’ efforts to prevent people like Jones from profiting off innocent victims whose lives have been turned upside down by unspeakable loss. We call on Roku to realize this and immediately pull the program. Until then, the families will be switching to alternate streaming providers that know the difference between authentic – if provocative – opinions and a lying opportunist seeking to make money by any means possible. There is no amount of anticipated revenue that could possibly justify Roku’s calculated decision.

After the InfoWars channel became available, we heard from concerned parties and have determined that the channel should be removed from our platform. Deletion from the channel store and platform has begun and will be completed shortly.