Last year, the top subscription video apps like Netflix and Hulu raked in a combined $781 million, and that trend is showing no sign of slowing down in 2018. In the third quarter of 2018, U.S. consumers spent an estimated $329 million in the top 10 subscription video-on-demand apps across the App Store and Google Play — a figure that’s up 15 percent from the $285 million spent in Q1.

The data is the latest in a new report from app intelligence firm Sensor Tower, which has been following the growth of subscription video apps for some time. Last year, for example, it found that Netflix’s app topped the charts in terms of revenue, when compared with all the other non-game apps on the market.

The app pulled in an estimated $132 million in consumer spending across the app stores in Q3, which is up 78 percent from the $74 million spent in the third quarter of 2017. 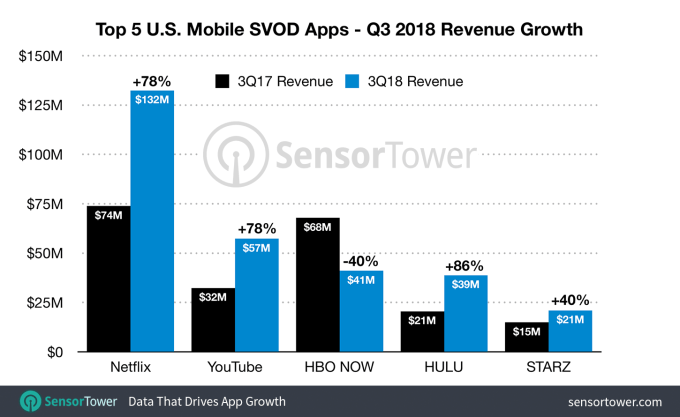 However, Hulu is now growing faster, the report found. It saw subscription revenue jump 86 percent to $39 million, up from $21 million a year ago.

It seems some consumers may have made the move to Hulu thanks to the extra cash they had on hand, thanks to dropping their HBO subscription.

The only subscription video app that saw revenue decline in Q3 was HBO NOW, which took in $41 million in the quarter, down 40 percent from the $68 million in Q3 2017. But notably absent this quarter was the network’s biggest draw, “Game of Thrones,” which had been airing at this time last year. A drop was expected.

The top-grossing chart of these subscription video apps for Q3 2018 looks very similar to last year’s in terms of the apps included, and sometimes, even their rankings.

But two services made moves, the report says. 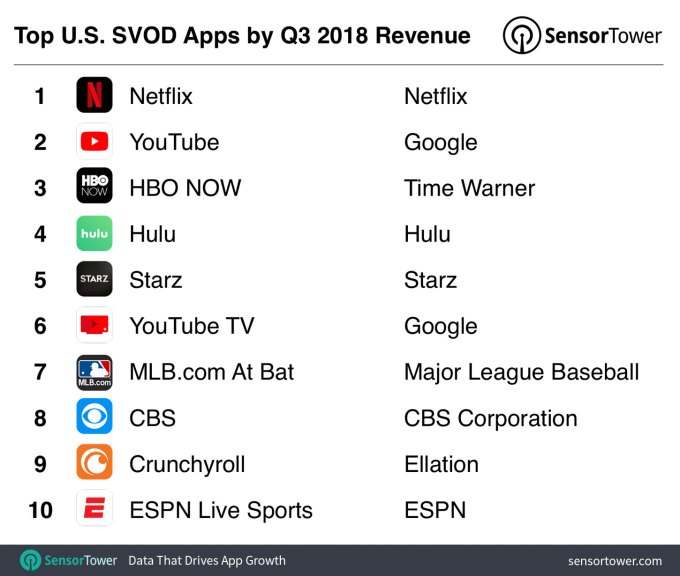 YouTube TV jumped from $3 million in the year-ago quarter to $16 million in Q3 on Apple’s App Store, thanks to its expanded market penetration and consumer adoption. And ESPN Live Sports, which added in-app subscriptions in Q2, grossed $4.6 million in the third quarter, up 119 percent from Q2.

Even CBS is doing well, despite the fact that not everyone loves the new “Star Trek.”

The broad increases in consumer spending on these video apps is yet another example of the significant and growing subscription business — much of which is taking place on mobile. Subscriptions accounted for $10.6 billion in consumer spend on the App Store in 2017, and are poised to grow to $75.7 billion by 2022, an earlier report found.

However, the top subscription apps aren’t all video apps. Others that consistently rank highly in the U.S. include Tinder, Spotify and Pandora, for example. Currently, the top-grossing chart for the App Store includes a number of non-games, like Netflix (No. 1), YouTube (No. 2), Tinder (No. 3), Pandora (No. 4), Hulu (No. 7), and Bumble (No. 8).