The App Store has seen over 170 billion downloads over the past decade, totaling over $130 billion in consumer spend. This data was shared this morning by app intelligence firm App Annie, which is marking the App Store’s 10th Anniversary with a look back on the store’s growth and the larger trends it’s seen. These figures aren’t the full picture, however – the App Store launched on July 10, 2008 with just 500 applications, but App Annie arrived in 2010. The historical data for this report, therefore, goes from July 2010 through December 2017.

That means the true numbers are even higher that what App Annie can confirm.

The report paints a picture of the continued growth of the App Store over the years, noting that iOS App Store revenue growth outpaces downloads, and that nearly doubled between 2015 to 2017.

iOS device owners apparently love to spend on apps, too.

The iOS App Store only has a 30 percent share of worldwide downloads, but accounts for 66 percent of consumer spend, the report says.

But this isn’t a complete picture of the iOS vs. Android battle, as Google Play isn’t available in China. App Annie’s data is incomplete on this front as it’s not accounting for the third-party Android app stores in China.

China today plays an outsized role, as App Annie has repeatedly reported, in terms of App Store revenue, even without Google Play. In fact, the APAC region accounts for nearly 60 percent of consumer spend – a trend that began in earnest with the October 2014 release of the iPhone 6 and 6 Plus in China. 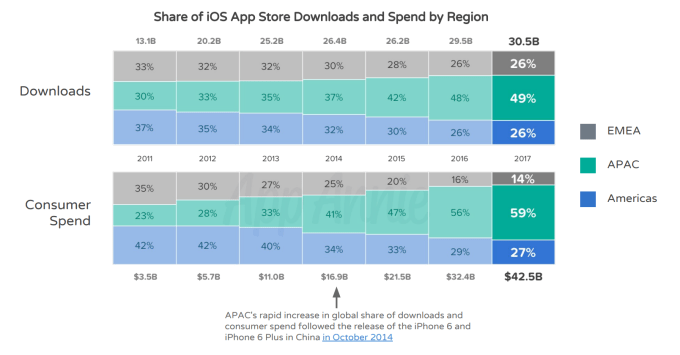 But when you look back at the App Store trends to date (or, as of July 2010 – which is as far back as App Annie’s data goes), it’s the U.S. that leads by a slim margin. China has quickly caught up but the U.S. is still the top country for all-time downloads, with 40.1 billion to China’s 39.9 billion; and it has generated $36 billion in consumer spend to China’s $27.7 billion.

iPhone users are heavy app users, too, the report notes.

Of course the numbers of apps used monthly are much smaller, but still range in the high 30’s to low 40’s, App Annie claims.

The report additionally examines the impact of games, which accounted for only 31 percent of downloads in 2017, but generated 75 percent of the revenue. The APAC regions plays a large role here as well, with 3.4 billion game downloads last year, and $19.3 billion in consumer spend.

Subscriptions, meanwhile, are a newer trend, but one that’s already boosting App Store revenues considerably, accounting for $10.6 billion in consumer spend in 2017. This is driven mainly by media streaming apps like Netflix, Pandora, and Tencent Video, for example, but Tinder makes a notable showing as one of the top five worldwide apps by revenue.

Thanks to subscriptions and other trends, App Annie predicts the worldwide iOS App Store revenue will grow 80 percent from 2017 to $75.7 billion by 2022. 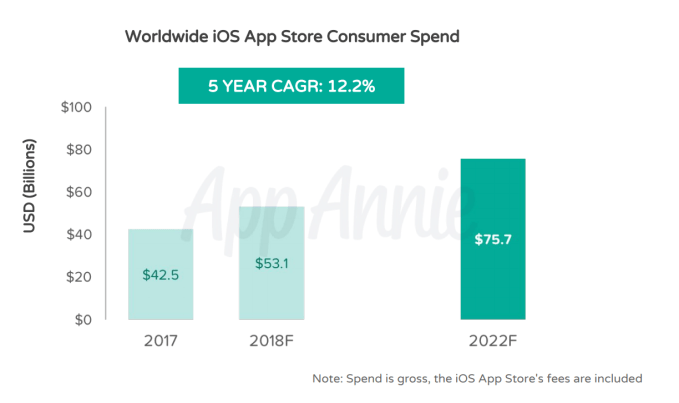 And while the App Store today has over 2 million apps, it has seen over 4.5 million apps released on its store to date. Many of these have been removed by Apple or the developers, which is why the number of live apps is so much lower.

The full report with the charts included is here.