Netflix was the top earning app of 2017 that wasn’t a mobile game, according to Sensor Tower’s new year-end report on the most successful apps and publishers across Apple’s App Store and Google Play. In previous years, the top spot had gone to Spotify, and before that, LINE. But this was Netflix’s year to shine. The service saw gross subscriber revenue of approximately $510 million, per the firm’s estimates. That’s about 2.4 times the $215 million users spent in the Netflix app in 2016.

It’s not surprising to see Netflix snagging this top-grossing position. The app has been at the top of the revenue charts at various points throughout 2017. For example, in Q2 Sensor Tower had reported the app saw 233 percent revenue growth year-over-year to $153 million, which was then up from the $46 million it had seen at the same time last year. 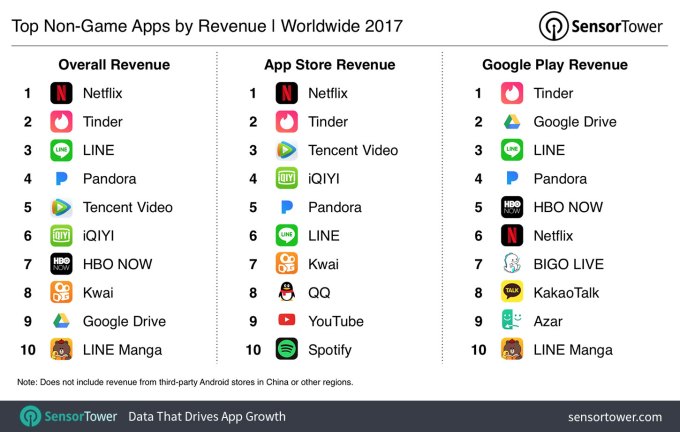 At the time, Netflix was reporting a surge in international subscribers, which were accounting for the majority of its new signups. These new users are often joining Netflix through their phone and paying through in-app purchases.

The Netflix app was also the top earner across all of Apple’s App Store. But on Google Play, it ranked below Tiner, Google Drive, LINE, Pandora, and HBO NOW.

This year, Facebook’s main app lost the number one spot to WhatsApp as it sank to #3. Messenger and Instagram followed, and Snapchat was in fifth place. 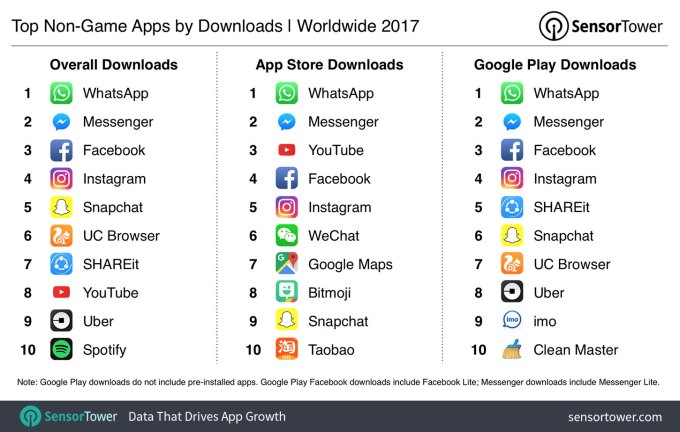 Mixi’s Monster Strike was the top grossing mobile game in 2017 – a position it’s now held for three years in a row. Tencent’s Honor of Kings earned second place, but again, because Google Play isn’t in China.

The games list is interesting for other reasons, as well. The one-time hit Pokémon Go didn’t make the top 10, but five year-old Candy Crush Saga did (#5). That goes to show that even though games is largely a hits-based business, it’s possible to have staying power in the market, too.

Tencent’s success in gaming and with Tencent Video also helped it become the top mobile publisher for both game and non-game revenue in 2017.

Updated, 1/12/17, 9 PM ET to show Facebook as #3 in non-game overall downloads due to an error on Sensor Tower’s original graph, now replaced.