Twitter may have suspended the Proud Boys and their controversial leader Gavin McInnes, but it was never their platform of choice.

The Proud Boys, a self described “Western chauvinist” organization that often flirts with more hard-line groups of the far right, runs an elaborate network of recruiting pages on Facebook to attract and initiate members. While McInnes maintained a presence on many platforms, Facebook is the heart of the group’s operations. It’s there that the Proud Boys boast more than 35 regional and city-specific groups that act as landing pages for vetting thousands of new members and feeding them into local chapters.

The group makes national headlines for its involvement in violent dust-ups between the far right and far left and has a robust recruitment network centered on initiating members through Facebook groups. As for where it fits into the far right’s many sub-factions, McInnes objects to the term alt-light, sometimes used to describe far right group that oppose some mainstream conservative ideals but don’t openly endorse white nationalism. “Alt Light is a gay term that sounds like a diet soda in bed w Alt Right,” he said on Twitter last year. “We’re “The New Right.”

To that end, most regional affiliate pages run a message outlining some ground rules, including a declaration that its members not be racist or homophobic — a useful disclaimer for making the group more palatable than many of its less clever peers. The Proud Boys’ agenda is less explicitly race-based than many groups it has affiliations with, espousing instead a broad sort of antagonism to perceived enemies on the political left and a credo of “western chauvinism.” The language is cleaned up, but it’s one degree removed from less palatable figures, including Unite the Right leader Jason Kessler. McInnes hosted Kessler on his own talk show just days after Kessler led the Charlottesville rally that left counter-protester Heather Heyer dead. In the segment, McInnes tried to create space between Kessler and the Proud Boys, though it wasn’t Kessler’s first time on the show or his only affiliation with the Proud Boys. 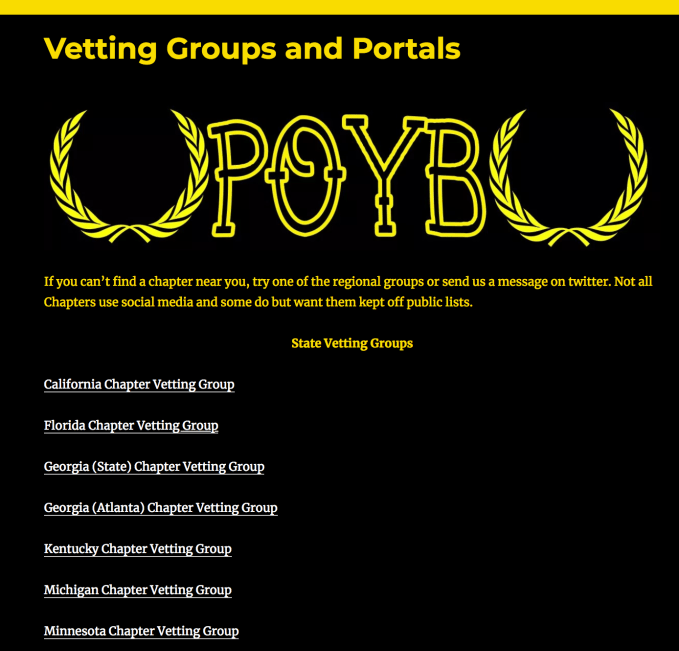 Who are the Proud Boys?

Like much of the young, internet-fluent alt-right, the Proud Boys intentionally don’t take themselves too seriously, a strategy that conveniently opens the door for them to denounce any kind of controversy that might arise. They show up to protests wearing black and gold Fred Perry polo shirts, have a whole charter’s worth of inside jokes and in general seem a bit more media and internet savvy than hardline white nationalist groups, some of which Facebook has managed to clear out in the last year.

Unlike some less strategic and internet-savvy portions of the far right, McInnes and his Proud Boys are careful not to openly encourage preemptive violence. Still, the Proud Boys do encourage retaliatory violence, going so far as to enshrine physical altercations in its organizational hierarchy.

To earn their “first degree,” Proud Boys must openly declare their allegiance to the group’s ideals, usually in a Facebook vetting group. 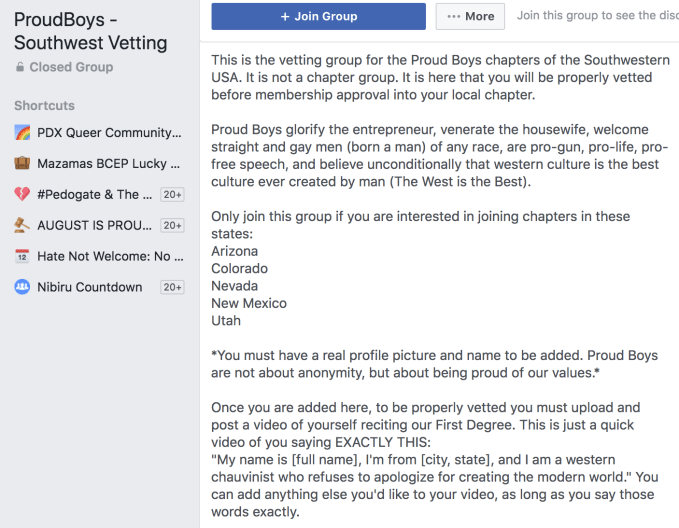 That’s where the Proud Boys Facebook network comes in. To get accepted into a local chapter, prospective members join specific vetting groups and are asked to upload a video of them meeting their “first degree” requirements:

“Once you are added here, to be properly vetted you must upload and post a video of yourself reciting our First Degree. This is just a quick video of you saying EXACTLY THIS:

“My name is [full name], I’m from [city, state], and I am a western chauvinist who refuses to apologize for creating the modern world.” You can add anything else you’d like to your video, as long as you say those words exactly.

Facebook also hosts pages dedicated to the Fraternal Order of the Alt-Knights, a new-ish subdivision of the Proud Boys and its paramilitary wing. The Alt-Knights, also known as FOAK, are led by Kyle Chapman, a.k.a. “Based Stickman,” a far right figure who grew to fame after beating political enemies with a stick at a 2017 Berkeley protest. The Alt-Knights aren’t always quite as careful to denounce violence. 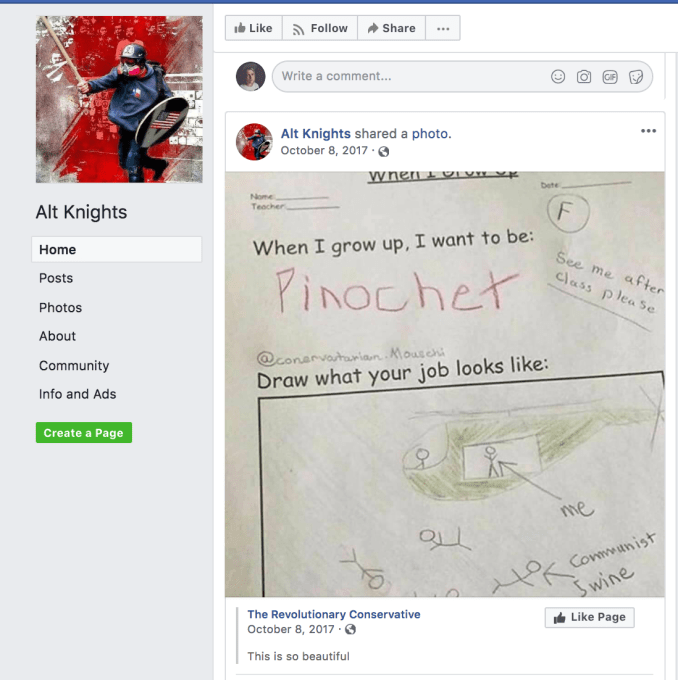 Whether the Proud Boys are in violation of Facebook’s unevenly enforced and sometimes secretive policies or not, the organization is making the most of its time on the platform. Facebook has rules against organizing harm or credible violence that the Proud Boys’ brawling ethos and alt-knights would seem to run afoul of, but the group stands by the useful mantra “We don’t start fights, we finish them.”

TechCrunch reached out to the Proud Boys to get an idea of their membership numbers and will update this story if we receive a reply. An analysis of affiliated pages shows that Proud Boys groups have added hundreds of members in the last 30 days across many chapters.

With a second Unite the Right rally around the corner and the ugly reality of more real-life violence organized on social media looming large, platforms are on their toes for once. Facebook has cleaned up some of the rampant racism that stemmed from the extreme right presence on its platform, but savvier, self-censoring groups like the Proud Boys are likely to be the real headache as Facebook, Twitter and Google trudge through an endless minefield of case-by-case terms of service violations, drawing sharp criticism from both sides of the political spectrum no matter where they choose to place their feet.