In an ongoing series over at Motherboard, we’re learning quite a bit about how Facebook polices hate speech and hate organizations on its platform. Historically, the company has been far less than transparent about its often inconsistent censorship practices, even as white supremacist content — and plenty of other forms of hate targeted at marginalized groups — runs rampant on the platform.

Tech is not winning the battle against white supremacy

Now we know more about why. For one, according to a series of internal slides on white supremacy, Facebook walks a fine line that arguably doesn’t exist at all. According to these post-Charlottesville training documents, the company opted to officially differentiate between white nationalism and white supremacy, allowing the former and forbidding the latter.

White nationalism gets the green light

Facebook appears to take the distinction between white nationalism and white supremacy seriously, but many white nationalists don’t, opting only for the slightly more benign term to soften their image. This is a well-documented phenomenon, as anyone who has spent time in these online circles can attest. It’s also the first sentence in the Anti Defamation League (ADL) entry on white nationalism:

Eventually, some white supremacists tried to distinguish it further by using it to refer to a form of white supremacy that emphasizes defining a country or region by white racial identity and which seeks to promote the interests of whites exclusively, typically at the expense of people of other backgrounds.

As Motherboard reports, Facebook notes “overlaps with white nationalism/separatism” as a challenge in its relevant training notes section for white supremacy, adding that “Media reports also use the terms interchangeably (for example referring to David Duke as white supremacist even though he doesn’t explicitly identify himself as one).”

Although there doesn’t seem to be total agreement among academics on whether white supremacy always implies racial hatred, the fact that it is based on a racist premise is widely acknowledged. [original emphasis]

Most of Facebook’s slides on hate speech and hate groups read like an embarrassingly simplistic CliffsNotes, lacking nuance and revealing the company’s apparently slapdash approach to the issue of racial hate. Tellingly, some portions of Facebook’s training text copy Wikipedia’s own language verbatim.

Here are the first few sentences of the Wikipedia entry on white supremacy:

White supremacy has roots in scientific racism and it often relies on pseudoscientific arguments. Like most similar movements such as neo-Nazism, white supremacists typically oppose members of other races as well as Jews. 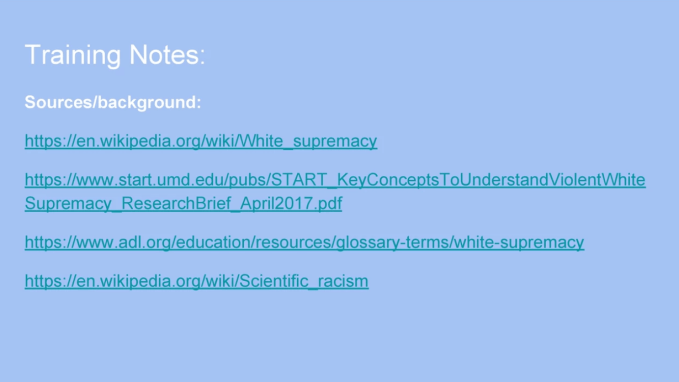 Bafflingly, Facebook also notes that “White nationalism and calling for an exclusively white state is not a violation for our policy unless it explicitly excludes other PCs [protected characteristics]” which by definition, a white state does.

By the same token, we allow to call for the creation of white ethno-states (e.g. “The US should be a white-only nation”).

By failing to recognize the political motivations behind white nationalism as an identity, Facebook legitimates white nationalism as something meaningfully distinct from white supremacy. While not all white nationalists call for the dream of a white ethnostate to be achieved through racial domination — and arguably the two could be studied distinctly from a purely academic perspective — they have far more in common than they have differences. Even with such thin sourcing, Facebook has devoted a surprising amount of language to differentiating the two.

In grappling with this question after Charlottesville, the Associated Press offered this clarification for its own coverage:

For many people the terms can be used almost interchangeably. Both terms describe groups that favor whites and support discrimination by race.

The AP also mentions the “subtle difference” that white supremacists believe whites to be superior.

For white nationalists, that attitude at times appears more implicit than explicit but that doesn’t mean it’s not there. From my own reading and considerable hours spent immersed online in white nationalist groups and forums, there is massive observable ideological overlap between the two groups. The instances in which white supremacists and white nationalists truly espouse wholly distinct ideologies are rare.

Further, it’s impossible to ignore that violence against non-whites is a central thread running throughout white nationalism, whether stated or implied. Imagining a white ethnostate that does not directly come about at the cost of the safety, wellbeing and financial security of racial minorities is pure fantasy — a fantasy Facebook is apparently content to entertain in pretending that the “white state” would not “explicitly exclude” anyone based on the protected characteristic of race.

The SPLC, an organization devoted to studying hate, explains the expedient fallacy of the white ethnostate as a nonviolent goal:

These racist aspirations are most commonly articulated as the desire to form a white ethnostate — a calculated idiom favored by white nationalists in order to obscure the inherent violence of such a radical project. Appeals for the white ethnostate are often disingenuously couched in proclamations of love for members of their own race, rather than hatred for others.

Sadly, for anyone who has watched many virulent strains of racism flourish and even organize on Facebook, the company’s shoddily crafted internal guidance on white supremacy comes as little surprise. Nor does the fact that the company failed to dedicate even a sliver of its considerable resources to understanding the nuance of white supremacist movements, aims and language.

We reached out to Facebook to see if these alarmingly reductive policies on racial hate have evolved in recent months (these materials are less than a year old), but the company only pointed us to the broad public-facing  “Community Standards.” Any further detail on the actual implementation of policies around hate remains opaque.

Though it may have learned some harsh lessons in 2018, for Facebook, opacity is always the best policy.