A number of activists and organizers in the Washington, DC area are disputing Facebook’s decision to remove a counter-protest event for a rally organized by Jason Kessler, the white nationalist figure who planned the deadly 2017 rally in Charlottesville, Va.

Facebook removed the event, “No Unite the Right 2-DC,” after discovering that one account connected to the event exhibited what Facebook calls “coordinated inauthentic behavior.” The company defines this activity as “people or organizations creating networks of accounts to mislead others about who they are, or what they’re doing.” 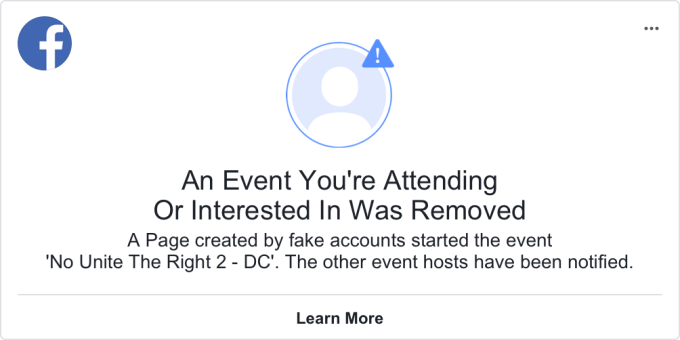 The Facebook page at the center of the controversy was called “Resisters.” TechCrunch confirmed that the Resisters page was created by “bad actors,” as defined by the company, who coordinated fake accounts to deceive users. Facebook ultimately removed the No Unite the Right 2-DC event due to its known interaction and engagement with the Resisters page and maintains that Resisters was an illegitimate page from its inception.

The “Resisters” Page also created a Facebook Event for a protest on August 10 to 12 and enlisted support from real people… Inauthentic admins of the “Resisters” Page connected with admins from five legitimate Pages to co-host the event.

The company also observed that a known Internet Research Agency (IRA) account joined the counter-protest event as an admin, though it only served as an admin for seven minutes. (The IRA has been assessed by the U.S. intelligence community as a content farm likely funded by a close Putin ally with ties to Russian intelligence.) On top of that, Facebook noted that an IRA account the company was aware of shared a Facebook event hosted by Resisters in 2017.

Here’s where things get even more tricky. The event that Facebook deleted had been taken over by a handful of real DC area activist groups. These groups, including Smash Racism DC, Black Lives Matter DC, Black Lives Matter Charlottesville and other local groups, worked together under the coalition name “Shut It Down DC” and their actions and plans were not inspired by the “No Unite the Right 2” event, they just happened to cross paths. (Since then, the coalition has recreated the Facebook event as “Hate Not Welcome: No Unite The Right 2.”)

We've since created a new Facebook event but we know real organizing comes from talking with our neighbors, and that this is a real protest in Washington, DC. It is not George Soros, it is not Russia, it is just us.

TechCrunch spoke with a handful of DC-based organizers, including Andrew Batcher, a Washington, DC-based activist involved with Shut It Down DC, to clarify how the local coalition of organizers became connected to an event and an account deemed illegitimate by Facebook.

“It was grassroots organizing from a lot of different groups who were interested in this,” Batcher said. “A lot of groups went down to Charlottesville last year. Charlottesville is only two hours south of DC.”

He explains that the group’s impetus was Kessler’s own event, not a Facebook event that organizers stumbled onto.

“When we started organizing we talked about making a Facebook page and saw that this already existed,” Batcher said. “It happens pretty regularly in DC knowing how many major events take a place here.” 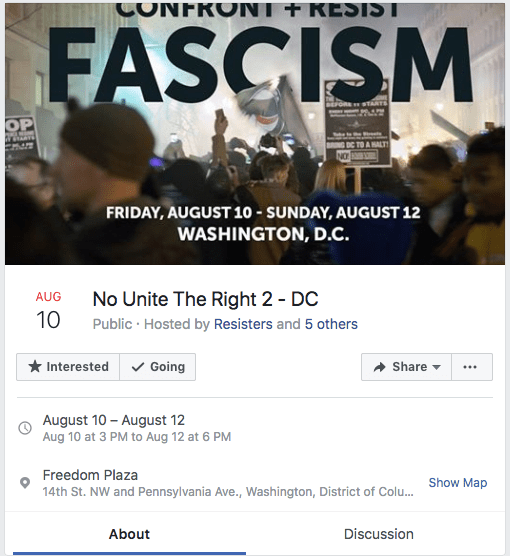 “We asked to be made co-hosts of the event and we put our stuff up on it basically,” Batcher said. That included video calls to action, photos and other content, including the event description. “Everything that was taken down was ours.”

Beyond creating the initial placeholder page, Batcher says that the Resisters page had “absolutely no involvement” in the event. “This is really outrageous for us,” Batcher said. “[It] makes it look like we’re Russian pawns. We know that we’re not, and we know that we’ve been doing this organizing.”

He and other activists on the left have expressed concerns that this depiction could undermine their efforts in the mainstream and even lead to conspiracy theories like Pizzagate that spill over into real life violence.

Facebook says that it reached out to the legitimate organizers of No Unite The Right 2-DC with the following message:

We haven’t been able to connect on the phone yet, but I did want to make sure you know that earlier today we removed a Facebook event that you are listed as a co-host of, “No Unite the Right 2 – DC”, because one the Pages that created the event, “Resisters”, has been removed from Facebook because [it] was created by someone establishing an inauthentic account that has been associated with coordinated inauthentic behavior.

I understand this may be surprising or frustrating. We are reaching out to make sure you have the relevant information and understand that this has nothing to do with you or your Page. Later today, we’ll begin providing information about the event deletion to the approximately 2,600 users who indicated their interest in the event, and the 600 plus users that said they’d attend. If you are interested in setting up another event, we would be happy to include details about it in our public communications.

According to Batcher, most of the event’s organizers with Shut It Down DC did not receive any correspondence and others received an email “two lines long,” which he provided.

The group is dismayed that Facebook went ahead and removed the event before making contact with more of its organizers. In interviews with TechCrunch, he and other organizers expressed a deep distrust of Facebook and a desire to see more evidence from the company that supports its recent actions. One organizer connected to the DC groups expressed concern that Facebook might be flagging activists working together using VPNs for suspicious coordinated activity. When asked about that concern, Facebook explained that VPN use and common privacy measures would not be sufficient, by Facebook’s standards, to cause an account or page to be removed.

“If there was an account that did something bad, get rid of that account. It doesn’t seem to me like it would have to spread to all of this legitimate organizing,” Batcher said. “What we would like is a public apology and them letting people know that we are real people doing real organizing.” He added that Facebook did not show consideration for the potential damage to the people who organized the event together in real life.

That distrust is reflected on both sides of the political spectrum. Concerns that Facebook is censoring content made by right-wing figures have bubbled up in congressional hearings and been floated among many users on the right, though there is little evidence supporting recent claims. On the left, the company has a checkered history of sometimes unwitting censorship in incidents that have affected everyone from Black Lives Matter supporters to parts of the LGBTQ community. In some of those cases, Facebook users were abusing the platform’s reporting tools for targeted harassment, but the company was slow to address concerns or to change its policy.

Facebook has also dragged its feet in confronting openly abusive, racist content on its platform and recently faced criticism for internal policies that allow white nationalism while forbidding white supremacism, drawing what is widely considered to be an artificial distinction between the two. These woes don’t just affect Facebook, but the platform does appear to be a perfect storm for anyone acting in bad faith.

While the counter-protest organizers have since created a new Facebook event and intend to continue their efforts, the situation is a fairly unsettling cautionary tale of a rising form of manipulation on the world’s biggest social platform. Recent revelations and those from 2017 show that a new breed of “blended” social media influence campaign — fake accounts leveraging the efforts of real, regular people — proves particularly insidious.

So-called “bad actors” are infiltrating legitimate causes, creating chaos and throwing everything into question. Even when these efforts are exposed, it’s a winning formula for anyone seeking to sow further discord and doubt in the U.S. political landscape. For everyone else, the odds aren’t looking good.