Five and half years after it launched, one of the more popular apps for kids’ reading and entertainment has finally arrived on the iOS. Amazon FreeTime Unlimited, the e-commerce giant’s subscription service for children 3-12 that gives unlimited access to 10,000 books, movies and TV shows starting at $2.99 for one user per month for Prime members, and going up to $9.99 per month for non-Prime members for a family plan of up to four users across tablets, phones, e-readers, and smart speakers, is now available on the App Store.

Apple is promoting the new app at the moment on the home page of the App Store, where a reader saw it and flagged it to us. Prime members get a discount to $6.99 per month for the family plan, but you’d need to buy that via Amazon’s site, not iTunes.

“We launch new products and features as they’re ready,” an Amazon spokesperson said. “We’re excited to bring the FreeTime Unlimited experience to iOS devices, including iPhone, iPad, and iPod touch.”

FreeTime Unlimited is already available on Amazon devices and on Android. Now, when users sign up for a subscription on any one platform, they can use it across all of them — whether it be a Fire tablet, a Fire Kids Edition tablet, compatible Android phones and tablets, or compatible Echo devices.

The move is a significant one both for Apple and Amazon. At a time when other media companies are launching kid-friendly versions of their services that bring in more parental controls and better filters to help block out content that is inappropriate for young ones, FreeTime Unlimited has proven to be one of the most popular kids-focused entertainment apps of them all — content includes video from Disney, Nickelodeon, Sesame Street, PBS Kids, National Geographic and Amazon Originals for Kids — and yet it wasn’t available on one of the most popular (and well reviewed) tablets used by children. 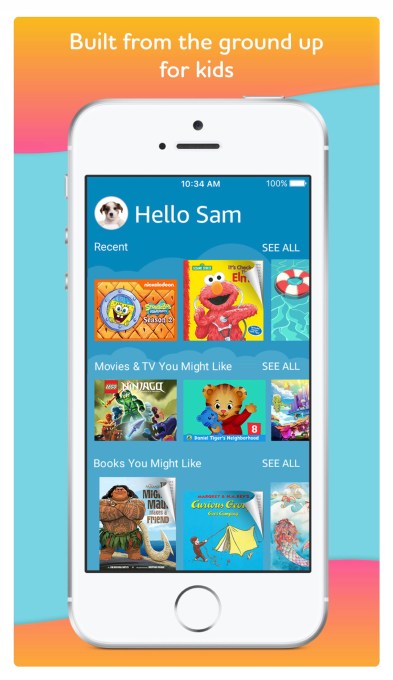 While Amazon initially kept it as an Amazon-only product for its early years — as a way of driving more sales to its own hardware — last year it finally launched a version for Android devices, but it’s taken over a year more to finally bring it to iPhone and iPad devices.

One of the reasons for this could be the ongoing struggle between Amazon and Apple. In some regards, the two are complementary companies: Amazon ships a lot of Apple products, and iOS is a very strong platform for Amazon in terms of online sales, for example.

But in others — such as in hardware, increasingly online entertainment and “owning” customers, and for talent to build its products — the two are rivals. Apple, for one, has not allowed apps on its iOS platform to enable Amazon book purchases directly from their apps, and Amazon doesn’t sell books and movies from its own app to avoid Apple’s cut. So it’s not surprising to see Amazon also delay certain content and features from the Apple platform in some kind of tit-for-tat.

I’m guessing those skirmishes will go on for a long time to come, but for now, iPad and iPhone users will have a little more Amazon than they did before on their devices. Why now? It could be that Amazon felt that user growth was tailing off on the other platforms, so now is a good time to boost with new availability.

It’s also likely influenced by Apple’s increased attention to parental control features on iOS, which may have some parents feel like they have enough options to lock down their kids’ devices while still allowing them access to more wholesome and educational content. That could limit the appeal for a subscription service like Amazon’s FreeTime Unlimited. But iOS 12 – which includes the new parental controls – doesn’t launch to the public until later this fall. That gives Amazon time to attract users to its own service in the meantime.

As with the existing version of FreeTime Unlimited, the app is divided into age groups and will have parental controls by way of the Amazon Parent Dashboard, as well as Discussion Cards that give them talking points about the work and summaries of what the kids are watching. 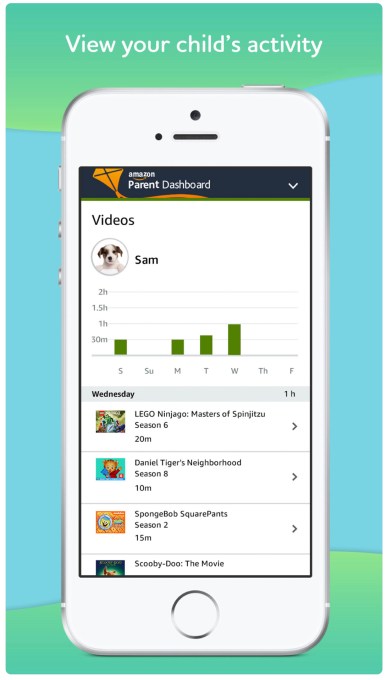 There may be variations based on geographies, but in the US the content will include films like Frozen, Moana, Star Wars, and Inside Out; TV shows like Sesame Street, Arthur, and Daniel Tiger’s Neighborhood from PBS; Bubble Guppies, Team Umizoomi, and Dora the Explorer from Nickelodeon; Marvel comics including Spider-man, the Avengers, and Captain America; and Amazon Originals such as Just Add Magic, The Kicks, Thunderbirds are Go, Creative Galaxy, and Tumble Leaf. One drawback to the iOS implementation of FreeTime Unlimited is that, unlike on Amazon’s own tablets, you can’t configure FreeTime Unlimited to completely reskin the device’s user interface to keep kids locked into the experience. Apple simply doesn’t allow third-party apps to have that level of control. Instead, FreeTime Unlimited works like any other app – you can launch it and exit at any time.

As with other apps, subscribing to FreeTime Unlimited will come via a user’s iTunes account (and thus Apple will get a cut) and will get automatically renewed until you turn off the auto-renewal 24 hours before the renewal date. There is also a free 30-day trial.