Domino’s will now deliver your pizza to the beach — well, sort of! Or the park, the sports field, that one gas station down the road or some notable landmark in your city where it will be easy for your delivery driver to find you, among other places. The company announced today the launch of more than 150,000 “Domino’s Hotspots,” which are locations that don’t have a traditional delivery address, like a home or business address. Instead, hotspots are just places where customers can meet up with their driver to accept a delivery order when they’re not at home or work.

But while the headlines proclaim Domino’s is coming to you at the beach or park, don’t expect the delivery driver to traipse across the hot sand to your towel or down a walking path into the woods — there are limits to how off-the-grid these deliveries will go.

Instead, “beach” and “park” deliveries are about getting pizza to your unconventional but easily accessible location — like poolside at your beach hotel, a public beach access parking lot or a covered shelter at a park. (I scanned a good chunk of the Florida coast and found no hotspots actually delivering “beachside.” Sorry!)

Of course, it’s been possible to convince a delivery driver to meet you somewhere unusual in the past. But you’d normally have to negotiate that over the phone — with varying degrees of success and confusion. With Domino’s Hotspots, however, you’ll actually be able to search for these meet-up spots online or in the Domino’s mobile app and place an order digitally. 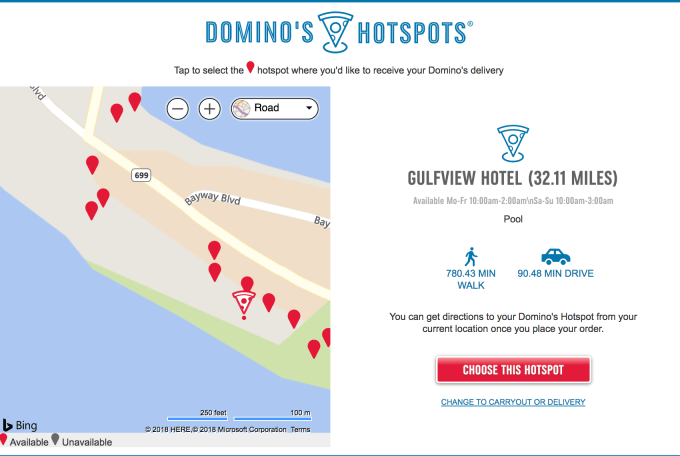 In addition to non-traditional locations like parks and pools, other hotspots available at launch include the Tommy Lasorda Field of Dreams in Los Angeles and the James Brown statue in Augusta, Georgia, for example. We also poked around in the app and found hotspots for locations like the pool and clubhouse in a neighborhood or hotel, the office at schools and colleges and spots nearby other businesses, like grocery stores, malls, gas stations and more.

Those latter locations are the kind of places where people outside of Domino’s delivery zones in more rural areas will often meet up to take a pizza delivery.

To use the new feature, customers will select the hotspot as the delivery destination in the app or online, then leave additional instructions that can help the driver find them, including their mobile phone number. When their order is complete, they’ll get text message alerts about the delivery’s progress, including the estimated time of arrival at the hand-off spot.

Despite its name, Domino’s Hotspots don’t offer a Wi-Fi connection. So expect to bring a phone with a good signal so you can receive those alerts.

“We listened to customers and their need for pizza delivery to locations without a traditional address,” said Russell Weiner, president of Domino’s USA, in a statement about the launch. “We know that delivery is all about convenience, and Domino’s Hotspots are an innovation that is all about flexible delivery options for customers.”

In recent years, Domino’s has invested heavily in digital, including with its Anywhere platform, which allows for ordering via SMS, voice, smart TVs, connected devices, cars, smartwatches, chat apps like Messenger, Slack and more. It also offers in-app order tracking, and experiments with future tech, like delivery by robot and drone.

While some of its initiatives feel more gimmicky than others (e.g. order by tweeting a pizza emoji), the company’s commitment to digital along with other changes like store remodels has helped push its stock up 5,000 percent since 2008.

Digital technology investments are also critical, given the competition not only from other pizza chains, but newer food delivery services like Uber Eats, Grubhub/Seamless, DoorDash and those that will bring you groceries — including stores’ quick meal kits and prepared foods — to your door, like Amazon’s Whole Foods (via Prime Now), Shipt, Instacart and more.

You can check to see which Domino’s Hotspots are near you from the website www.dominos.com/hotspots.