We’ve said it once, we’ll say it again– the food delivery robots are coming! This time, they’ll be carting piping hot pizzas to Domino’s customers.

The tech-loving pizza company joked about driverless delivery robots in 2015. Remember its “Domi-No-Driver” campaign? But now it’s making good on the April Fool’s gag. Domino’s has just inked a partnership with Starship Technologies to begin using its “personal delivery devices” this summer in Hamburg, Germany. If all goes well there, Domino’s and Starship intend to bring robot pizza delivery to the Netherlands as well.

Starship’s devices have the look of a self-driving food cart, rather than some science fiction humanoid. They travel on six wheels at a clip of 4 miles per hour, and can carry just over 40 lbs. of cargo. In Hamburg, the robots will deliver pizzas within a one-mile radius.

Starship is facing significant competition in the burgeoning market for “professional service robotics.” Competitors range from fellow startups like Marble to established players like Boston Dynamics.  The International Federation for Robotics (IFR) forecasts that between 2016 and 2019, logistics businesses will have begun using at least 175,000 robots to provide their services. That compares to UPS’ global fleet of around 100,000 trucks today. 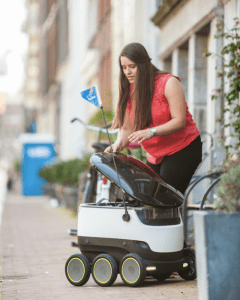 A customer takes a pizza from Starship Technologies’ delivery robot.

Launched by Skype co-founders Ahti Heinla and Janus Friis in 2014, Starship Technologies also recently inked food delivery partnerships with DoorDash and Postmates in the US. But Domino’s has yet to offer pizza delivery by robot here.

Many retailers and restaurants are waiting to see how robot delivery tech shapes up, but also how the rules for using these devices are set in the US market. Virginia, and as of this week Idaho, allow delivery by robot today. Other states and federal US laws are still to be determined..

Domestically, Domino’s has offered other tech-enabled and entertaining ways to buy a pie, including by Tweeting a pizza emoji to @dominos, or requesting delivery from drivers of the Domino’s DXP “ultimate pizza delivery vehicle,” a modified Chevy Spark. In New Zealand, Domino’s has also begun delivery by drones in a partnership with Flirtey.

Indeed, tech has become an international marketing gimmick for Domino’s. But learning what works, and doesn’t, in the next wave of logistics tech could spell serious cost savings, and not just near-term buzz, for any major restaurant chain that delivers. After all, robots may need maintenance, but they don’t call in sick unexpectedly or hop between employers like the people they could displace.