In the early days of streaming music services, some aimed to differentiate themselves by offering users the ability to upload their personal collection of MP3’s, which could be streamed alongside the on-demand streams and radio stations offered by the music service itself. Rdio, which later sold to Pandora, offered music uploads for matching purposes, for example. Amazon Music, meanwhile, let you upload your own songs from your Mac or PC. But no more. Amazon quietly announced this week it’s retiring its Amazon Music Storage subscription plans, with plans to completely disallow playing or downloading songs from the service starting in January 2019.

The shutdown was first spotted by Slashgear, which pointed to new help documentation on Amazon’s website.

Here, the company explains that as of Monday, December 18, 2017, the ability to upload music will be removed from the Amazon Music desktop app.

There’s a long grace period before access to your music is permanently disabled, however. The tracks you’ve already uploaded to Amazon Music will still be available until January, 2019. During this time, you can continue to listen to them as you would normally, as well as re-download them back to your computer.

The shutdown affects both the free storage plan, which allowed for 250 songs to be stored in the cloud, as well the paid plan – originally $25 per year – which offered cloud storage for up to 250,000 songs.

Reached for comment, Amazon confirmed the closure but pointed out one notable exception regarding which of your MP3’s will actually be deleted in January. 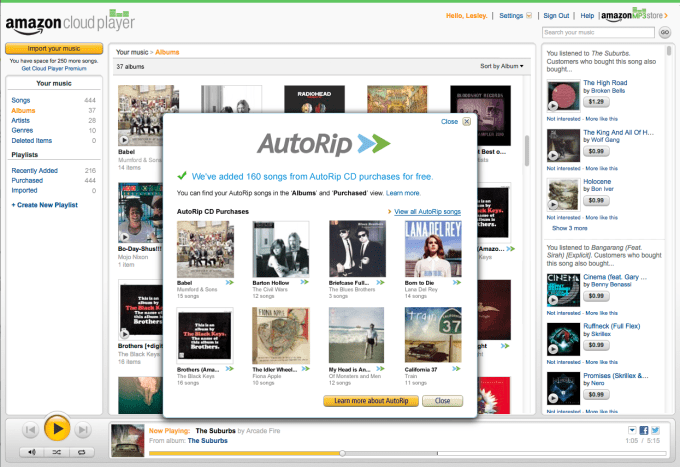 “This change will only impact music imported by customers from other sources, and does not impact music purchased from Amazon  – MP3s or AutoRip) – those will remain in the Cloud and will be available on mobile and desktop devices,” a spokesperson said.

Amazon had introduced AutoRip back in 2013 as a way to automatically sync older CD purchases to the cloud, in the form of matching MP3s. But even at launch, the service wasn’t that big a deal as MP3s were already on their way thanks to the rise of on-demanding streaming. But at the time, music-matching services were still common – like Apple’s iTunes Match and Google’s scan-and-match.

It later seemed to start shifting away from the music upload space when it shut down its dedicated music importer software in fall 2015, pointing customers to the Amazon Music app instead.