Amazon is today introducing a new service called Amazon AutoRip, which automatically gives customers free MP3 versions of any CDs they’ve purchased from Amazon since the launch of its Music Store back in 1998. Customers will also have access to a growing number of new releases. The digital music is being placed in users’ Amazon Cloud Player accounts, the company’s answer to Google Music, iTunes Match, Rdio, and other services that store users’ own music collections in the cloud.

News of the service’s debut was leaked last night by CNET, which said it would be arriving “soon.”

At launch, the AutoRip service is offered for over 50,000 albums on Amazon.com, with more on the way, including both back catalog and most new releases. The option has been made possible by deals made with record labels and music publishers, Amazon says. According to Steve Boom, Amazon’s VP of Worldwide Digital Music, the company now has deals in place with the three major labels (EMI, now a part of Universal; Sony; and Warner) as well as hundreds of independent labels. On the publisher side, Amazon has participation from all the major music publishers and “hundreds, if not thousands,” of smaller publishers, says Boom.

Amazon’s customers won’t have to take any action to switch on AutoRip. In fact, even if users have never signed up or downloaded the Cloud Player software, the option will be enabled if they’ve ever purchased a CD on Amazon. In that case, those customers will receive an email shortly after the service’s launch today informing them that a digital copy of that purchase (or purchases) is now available in the cloud for free. 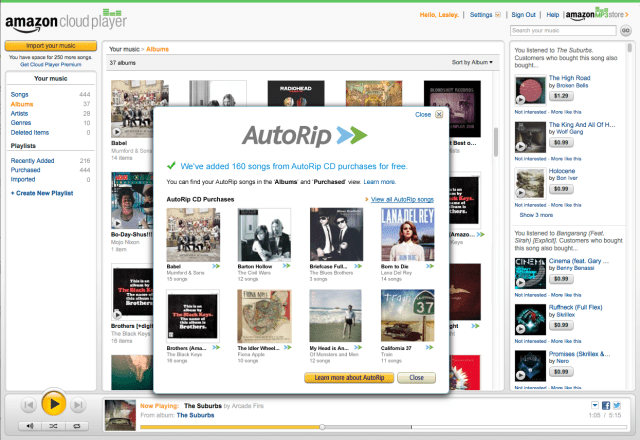 Cloud Player, which currently works on Amazon Kindle Fire devices, Android phones and tablets, the iPhone, iPad and iPod touch, Roku, Sonos, and Samsung smart TVs and DVD players, also arrived on Ford’s AppLink platform earlier this week. This initial automobile integration offers access to the service from over 1 million Ford vehicles, as well as the forthcoming new models. It’s the first of many auto partnerships in store for Cloud Player, Boom tells us.

In terms of reach, the new CD-to-MP3 AutoRip service will target a large number of Amazon’s customers who have bought CDs from the site over the years. Boom reminds us that CDs were the second product type Amazon ever sold following books. “Since [1998], we’ve sold hundreds of millions of CDs to tens of millions of customers – a lot, a lot of music,” he says. Boom adds that Amazon specifically focused on enabling the service for those CDs that are in high demand among its customer base. In other words, 50,000 CDs may represent a small percentage of Amazon’s extensive music catalog, but it’s a “substantial percentage” of Amazon’s sales. And, as new albums continue to be released, Amazon’s AutoRip collection will grow. 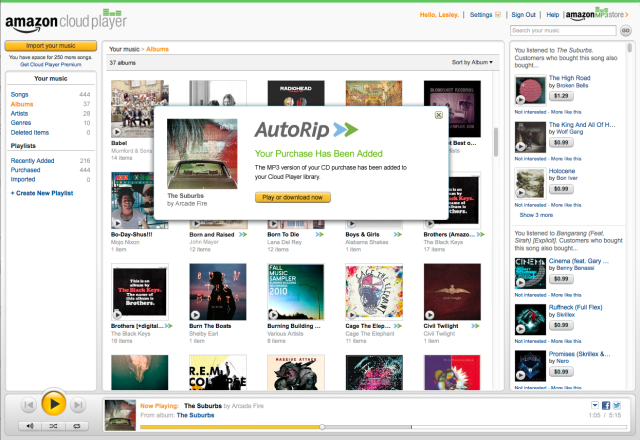 Last July, Amazon separated its Cloud Player service from its Cloud Drive storage product, which are best understood as Amazon’s alternatives to Google Music and Google Drive, respectively. The free tier of Cloud Player supports up to 250 imported songs, and those purchased at Amazon don’t count toward storage totals. For $24.99 per year, users can upgrade to Cloud Player Premium to import up to 250,00 songs. Premium users’ collections are also upgraded to 256 Kbps audio quality.

This music-matching option in Cloud Player is similar to Google’s, Apple’s and others’ “scan and match” functionality, in that it will scan a user’s music collection, then mirror it in the cloud. At Apple, this is known as iTunes Match, also $24.99 per year and 256 Kbps audio quality. Google’s is free and offers “up to” 320 Kbps quality.

In testing the AutoRip functionality as a Cloud Drive user, the process of gaining access to the digital songs was simple. When purchasing a track, there’s a message about a “free MP3” right below the “add to cart” button, and above the “buy now with 1-Click” button, when signed in.

After the purchase, you’re then redirected to a page which alerts you to the shipping confirmation, offers recommendations of other tracks to buy, and shows a big green button off to the right which reads “Go to Cloud Player.”

With a click, you’re then redirected again to Amazon Cloud Player, where there’s now a big banner alerting you to your recent purchase displays. (New users will have to first sign in with their Amazon account, and accept the Terms of Use.)

From this pop-up window, you can immediately play the track by clicking the yellow button, or head into Cloud Player to download the file to your hard drive.

If this is your first time using AutoRip, you’ll also see a notification about how many songs Amazon has added on your behalf. Although I could have sworn I had never purchased CD music from Amazon, I was surprised to find 43 songs had been added for me. It was music I had purchased as a gift – so don’t be surprised to find a few oddballs in this list.

One more click on this second notification window takes you directly to those AutoRip tracks. They are found under the “Purchased” section of your Amazon Cloud Drive folder structure, and are highlighted separately from other music purchases by the green and blue badge next to the purchase date on the right of the screen. 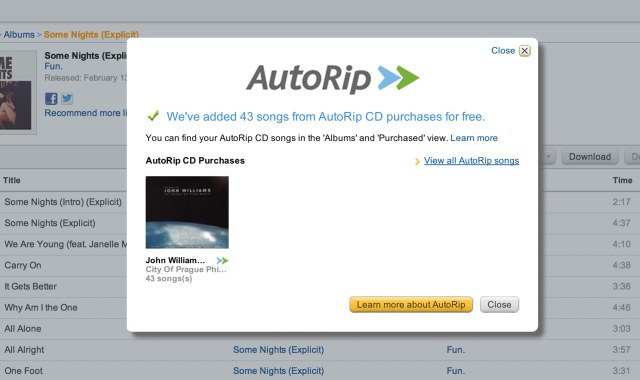 From here, Cloud Player works as usual. You can add the auto-rip tracks to playlists, download them, or delete them to free up space.

While much of the current tech coverage is focused on the latest in streaming music, including both radio services like Pandora, as well as on-demand options like Spotify, Boom says people still like to buy physical music. “It’s almost 50 percent of the music market in the U.S.,” he says. “Only in 2011 did digital overtake physical in the United States, and in many countries, physical still represents 70 to 80 percent of music being sold.” At Amazon, both the physical and digital music businesses continue to grow, he adds, but declined to provide specific numbers.

Although Amazon AutoRip is U.S.-only, the plan is to offer the service to the other countries where Amazon operates a music store in 2013, including the U.K., France, Germany, Italy, Spain and Japan. As for competing with the radio or on-demand cloud services in the future? No comment there. “Both of those business models are evolving rapidly, but I don’t have anything to talk about,” Boom says. “Our focus is really on your music, as opposed to all the world’s music that might be out there. That’s not our strategic focus today.”

That being said, Boom notes that Amazon has invested heavily in digital music, that its digital music team has grown over the past couple of years, and notes “you’ll see a lot of cool stuff” from Cloud Player this year.

Cloud Player is a part of Amazon’s growing lineup of consumer-facing cloud services that compete with those from Apple, Google and other startups, such as Dropbox for example. The company now has its own online mobile application store, online cloud storage called Cloud Drive, and it recently introduced a mobile application called Cloud Photos for uploading and sharing photos stored in Amazon Cloud Drive.