Earlier this year, Skype introduced a revamped version of its application offering a heavier focus on media sharing and social expression tools, in an effort to better compete with more modern social communication services, like Slack and even Snapchat. Today, the company is publicly launching the new version of Skype to the desktop, including on Mac, Windows 10 (November 2016 update and lower), Windows 8, Windows 7, and Linux.

The app had been in Preview on the desktop since August.

During that time, Microsoft says it responded to user feedback in determining which features to prioritize, as it transitioned Skype’s new look to the desktop platform.

For instance, one of Skype’s more controversial features – a Snapchat “Stories”-like mode called “Highlights” – is not available in the desktop app at this time. The decision was made based directly on Skype testers’ feedback, we understand. While the company still wants to add Highlights to the desktop in a later release, for now it remains a mobile-only feature.

Instead, if you want to share what you’re up to with your Skype contacts on desktop, you can change your presence or set a mood message, thanks to the return of status updates. 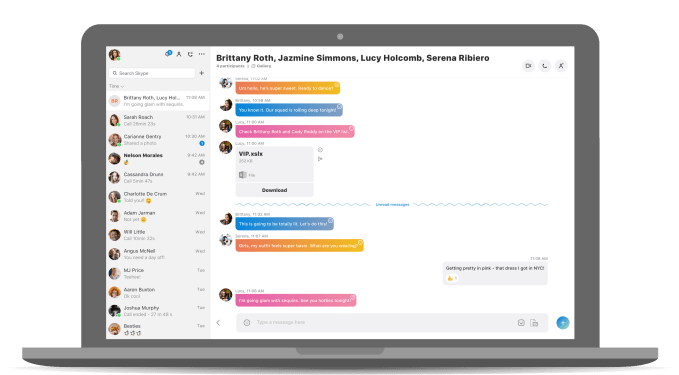 However, the new desktop version of Skype does include many of the other changes introduced in the redesign, including its overall more colorful and youthful feel. In group conversions, for instance, each person’s messages can be color-coded in shades of blue, orange and pink, with the option to “react” to messages with emoji icons, similar to how you can respond in Facebook’s Messenger.

These reaction emoji are available during video calls, too, allowing you to send a big emoji that’s temporarily overlaid on top of the video caller’s window. It’s the kind of feature that makes Skype seem like it’s aiming for a more youthful demographic, rather than one that serves its professional use cases. 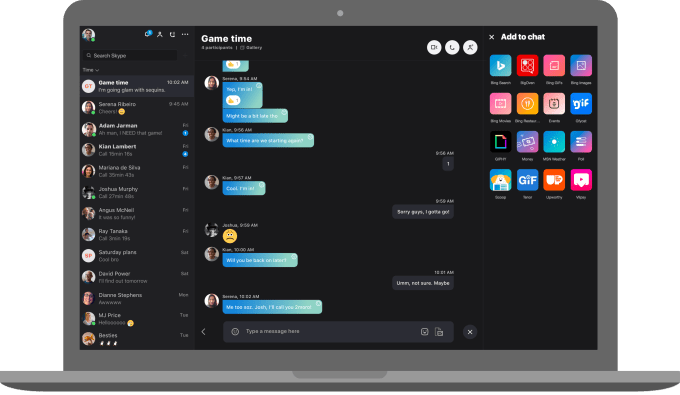 The updated Skype also includes personalization options, like ability to theme the app (e.g., with a new, darker theme, which is currently en vogue with apps like Twitter and YouTube), and the ability to organize your contact list to your liking. You can organize contacts by time, unread or status, as well as pin people and groups to have them more easily accessible.

One of the new Skype’s more useful features is the media gallery associated with each chat that helps you quickly locate shared content from a conversation, like media, links and files. This can be sorted by type, too, for easier searches. And because file sharing is cloud-based, you can send files up to 300 MB.

Like most social apps today, you can now use @mentions to capture a person’s attention in a chat, and like rivals Slack, Messenger, and others, Skype lets you use bots and add-ins to get things done. For instance, a Hipmunk, Expedia, and StubHub bots help you book tickets; Microsoft’s Scoop bot keeps you updated on the news; Giphy lets you share GIFs inside chats; while other add-ins let you schedule events, send money, and perform other tasks. (Bots are broadly available; but add-ins are available to Skype Insiders only for now).

Microsoft declined to say how many total active users Skype today has, which hints that it hasn’t grown significantly since the 300 million monthly users the company announced at last year’s Build conference. (For comparison’s sake, Skype’s latest challenger in the workplace, Slack, announced 6 million daily users in September. Skype, in other words, may not be as ‘cool,’ but it’s still an app used by a sizable group.)

However, Microsoft did point out that Skype has now surpassed a billion downloads on Android, has generated 2 trillion minutes of video calls since 2006, and today’s users make up to 3 billion minutes of calls per day.

The new version of Skype for desktop can either be downloaded manually, or may be rolled out via automatic updates, if enabled. Windows 10 users higher than the November 2016 update will receive an update with the new features.