Slack today announced a slew of new updates, and also said that the company now has more than 6 million daily active users and has crossed $200 million in annual recurring revenue.

Silicon Valley’s favorite enterprise chat app, still seems to be growing quite a bit and continues to roll out the drip-drip-drip of products you’d see from a company looking to capture new enterprise users. Today, the company said it is rolling out a new feature that will allow employees to add members from different organizations to teams within Slack, a feature that has been long-requested. Slack lead product manager Sean Rose said this is a feature that’s been in the works for a year.

This may seem like a small incremental change, but for a company like Slack — much like Dropbox, Snap, or Apple — needs to have a lot of caution when it makes any product changes. You could say it follows the law of consolidation of taps: the more taps it takes to get something done, the less likely someone is to use the app. In the case of this, for example, it’s about making it possible to create a channel that makes it easier to pop in and out for multiple organizations. That’s especially true on mobile, where an increasingly distributed workforce needs an app that has as little friction as possible.

Slack is as much a cultural phenomenon as it is an enterprise product. For example, you might have caught a little homage in the new season of BoJack Horseman that came out last week on Netflix. But it’s going to need to show it can continue to grow its user base if it’s going to show the world it can expand beyond the little techno-bubble that’s made it have that kind of cultural icon status.

This is definitely a problem we’ve faced internally in some ways, as it sometimes requires creating a sort of group chat in order to get people communicating rather than opening a direct channel for multiple organizations. So, in that sense, it’s another abstraction out of a use case that requires a few more steps. Reducing that friction is key for a company that is trying to pride itself on simplicity, as getting those processes to as few taps as possible means more and more people will come to Slack every day to get the job done.

With more than 9 million weekly active users, Slack said it passed 50,000 paid teams, and 2 million paid users, earlier this summer. So, again, it’s still making some progress on this front.

Slack today said it is opening up some new localizations, including French, German, and Spanish. That includes the entire product (and all its weird contextual glory), as well as admin-facing dashboards and local support among other things. But that challenge, which is actually a lot like other typical social networks that try to expand internationally, was a bit harder than it seems given that it had to figure out some way to bring its attempts at creating a light-hearted and playful tool to the enterprise. 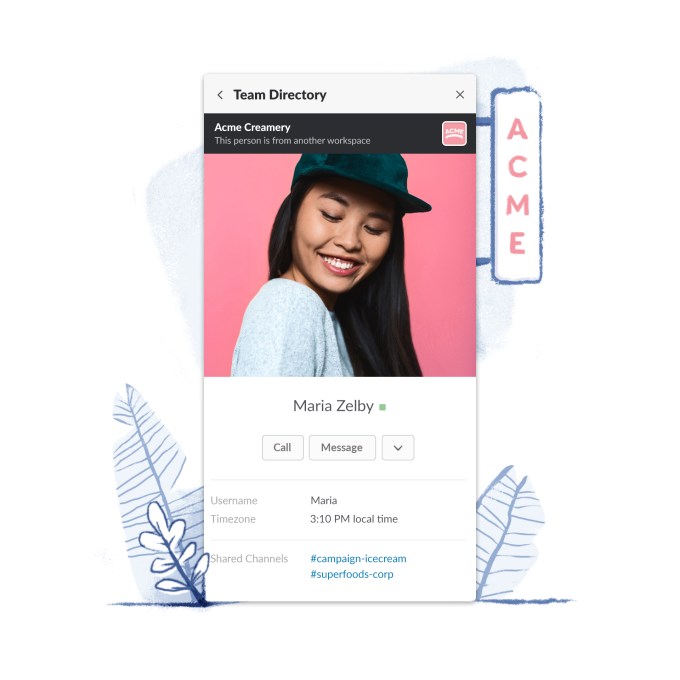 “Some of the things that set slack apart are the degree we focus on the tone of voice,” Rose said. “We try to maintain a friendly and maybe playful tone that’s still focused and respectful of peoples’ time. When localizing, the obvious thing to do is hire a firm and give them your English strings [to translate]. But because we wanted to protect the tone we used, we actually hired people to join Slack as language editors.”

It’s going to have to eventually bring some of its strengths to these new features as well. Slack has introduced tools to make search smarter internally, but that’s a different story when it comes to shared channels. There could be a small crisis if private or proprietary information showed up in search results for another organization, especially one that’s frenemy status. Rose said that’s some of the low hanging fruit it can target over time as it continues to refine its products.

Slack is going to face a lot of competition, especially as larger companies start to catch on to the trend it helped create in terms of creating simple communications apps in the enterprise. Microsoft Teams added the ability to add guests earlier this week. Atlassian launched its Slack competitor, Stride, just last week. Slack has captured a lot of the hearts and minds of the early adopting enterprise customers that demand a consumer experience, but there are a lot of companies that are nipping on its heels.