Target’s next-day delivery service focused on everyday essentials, which has been in testing over the summer, is now expanding to eight major metros, making it available to over 70 million people, or about one-fifth of the U.S. population. The service allows online shoppers to fill a box with typical household items like laundry detergent and pet food for a flat fee – similar to Amazon’s Prime Pantry offering.

However, Target is currently charging $4.99 per box (up to 45 pounds) versus Amazon Prime Pantry’s $5.99. It also doesn’t require an annual membership, but is available to any Target online shopper in the supported regions. 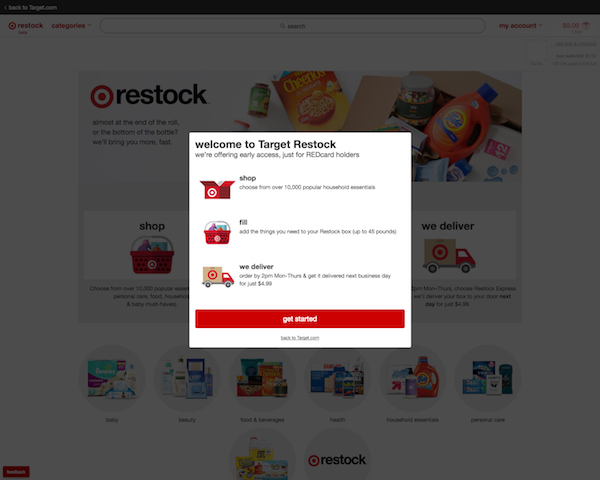 Orders placed by 2 PM Monday through Friday will arrive the following day, also faster than Prime Pantry which doesn’t commit to Prime’s two-day delivery schedule. (A schedule, in fact, which has been slipping, some customers complain.)

With the expansion, Target’s next-day service is available in the Atlanta, Chicago, Los Angeles, New York, Philadelphia, San Francisco (mid-October), St. Louis, and Washington, D.C./Baltimore areas. The service was previously available in Denver, Dallas-Fort Worth, and in Target’s hometown of Minneapolis.

Via the Target Restock website, customers can shop from over 15,000 products, including things like cleaning supplies, baby products, beauty and personal care items, dry goods, health products, and packaged groceries, like cereals and snack foods, among other things.

The company says that during its test period, shoppers have most regularly been using the service to order on-the-go snacks, beverages, cereal, mac and cheese, and paper towels – an early indication that people are doing at least some of their online grocery shopping via Target Restock.

That’s notable given the hefty competition in the online grocery market at present. Not only are there independent companies like Instacart and Shipt vying for customers, Amazon just dropped $13.7 billion to acquire Whole Foods, giving it a brick-and-mortar presence inside cities, while Walmart is ratcheting up the competition via its grocery pickup business and even today’s move to start delivering groceries inside customers’ freezers and refrigerators. 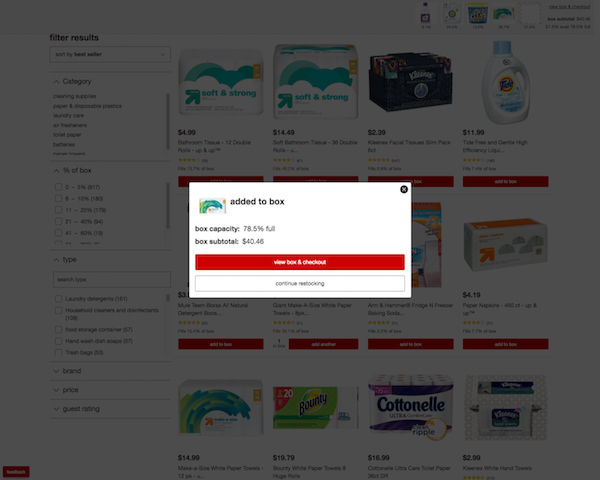 The expansion of Target Restock comes alongside other advancement Target is making inside its stores, too, including the release of an updated app that combines its Cartwheel savings with a new Bluetooth beacon-powered indoor mapping component, and soon, a mobile payments service with support for Target REDcard and Target MasterCard. (The app was recently spotted in beta, but Target says that was meant for a small number of internal testers, not the public.)