Target is adding an improved indoor mapping component to its mobile app, designed to help shoppers find their way through stores and locate the products they need, the retailer announced this morning, referring to the feature as a “GPS for your shopping cart.” Instead of simply showing a static map, or noting the aisle number where a product can be found, the new Target application will actually show your own location on the map, as indicated by a blinking dot.

As you move through the store, your location will update, too – similar to how the blue dot appears on Google Maps, for example.

But in Target’s case, it’s not GPS that’s coming into play here. The retailer instead had invested in Bluetooth and beacon technology which it has been rolling out across its stores in order to support this new feature.

“I want our digital experiences to be every bit as delightful as shopping in one of our stores,” said Target’s Chief Information and Digital Officer, Mike McNamara, in a video introducing the new indoor maps. 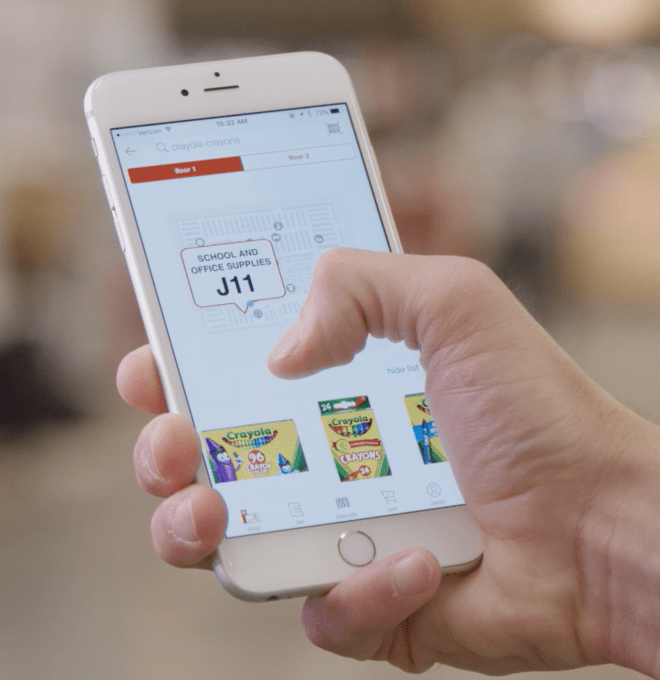 He then demonstrated how you could use the updated Target app to click on an item on your list, then see its location appear on a store map, including the aisle number and whether the item was on sale.

The company had told us earlier it had been updating all its stores with new, energy-efficient LED lighting. It chose to purchase fixtures that have Bluetooth beacons built-in. These beacons are what allow Target’s app to locate shoppers in the stores, and then guide them to products, as needed. Target will also be using the beacon technology to highlight which of its “Cartwheel” deals are near your current location.

Target had been testing the use of Bluetooth beacons for a couple of years, initially with beacon provider Estimote. Those tests wrapped up some time ago, however, as Target prepared to more fully invest in the technology to enhance the in-store shopping experience.

Indoor mapping is only one of many upgrades planned for the main Target app, which is now also merging with Target’s popular savings app Cartwheel, and will later support Target’s mobile payments experience at checkout.

Currently, the shopper’s in-store location on the app’s map is live in about 800 stores and the “deals nearby” functionality is live today in fewer stores. The company plans to have its indoor mapping functionality available in about half its over 1,800 U.S. stores by this holiday season, the retailer tells us.