Walmart announced today it will begin testing a new service that will allow customers with August smart home devices, like the August doorbell and security cameras, to have their packages delivered inside their home instead of left on the doorstep. This test will also include online grocery orders, which won’t just be placed inside the house like the packages, but will be put away in the fridge and freezer, when appropriate.

The retailer says it will soon start this test in the Silicon Valley area with select customers who have opted into to try the new service.

The customers will utilize an August smart lock to allow delivery drivers a one-time entry into their home. By using these smart home devices, the customer can see the entire delivery process from start to end, beginning with a notification sent to their mobile device.

The deliveries themselves are being handled by Deliv – a service that Walmart-owned Sam’s Club began testing last year for last mile deliveries in Miami.

The Deliv driver will use a one-time passcode to enter the customer’s home with the package or grocery order, then put the cold and frozen groceries away, if need be. 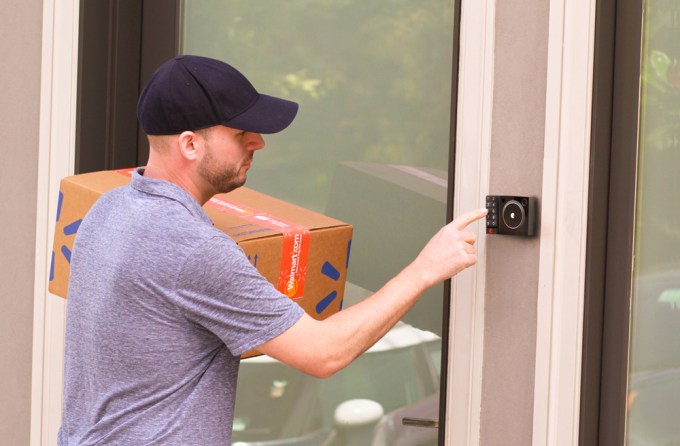 While August is the first smart home partner that Walmart is working with on this effort, presumably, if the tests were successful, Walmart would add other smart home device makers to the list of supported device in the future.

The company didn’t say what this new service would cost, instead noting that pricing is something that the experiment will focus on. In other words, Walmart will try to determine what price a customer is willing to pay for this added convenience.

This is the first time that Walmart had trialed a service where delivery personnel would directly enter a customer’s home, but its subsidiary Jet.com recently struck a deal with smart access provider Latch to improve deliveries in urban markets. In that case, however, residents living in 1,000 apartment buildings were receiving a free Latch system for the exterior door of their building, which would allow them to securely allow access to delivery personnel.

With the August partnership, Walmart customers both inside and outside cities could take advantage of the service, if they were also August device owners.

“We’re excited to be running this test in Silicon Valley with a handful of August Home customers, all of whom have opted-in to participate in testing this new concept,” said Sloan Eddleston, Vice President, Walmart eCommerce Strategy & Business Operations, in Walmart’s announcement. “And we want to do more in the future by delivering groceries and other orders in whatever location works best for our customers – inside the house for some and in the fridge/freezer in the garage for others,” Eddleston added.

The effort is one of many e-commerce innovations the retailer has developed as it continues to battle with Amazon.

In recent months, Walmart has also introduced a membership-free, 2-day shipping program; a pickup discount for those who ship-to-store; curbside grocery pickup and, in some places, delivery through a partnership with Uber. It has been testing other initiatives, too, like using Walmart store staff to drop off customers’ online orders while on their way home.

Walmart didn’t say how long it will run this latest test, or if it plans to expand it in the future to more cities.