Video is the name of the game in social networking: sites like Facebook and Twitter have been doubling down on the medium in recent years to drive more traffic and engagement from users, and also as a platform to snare more premium advertising away from traditional television broadcasters; Snapchat put video at the core of its service from Day One.

Now Microsoft-owned LinkedIn is hoping to muscle in on the party with its own video strategy. Today the social networking site for the working world is launching a new feature to let any user upload a video to the site, via LinkedIn’s iOS or Android mobile app.

The idea will be to let users create videos that highlight their professional work: projects that have been finished or are in progress; product demonstrations; and other work-related videos that highlight what you do. It looks and feels very much like a video launch for the non-Snapchat set. For those who might not know where to start but think it might be a good idea to upload some video, LinkedIn has taken the very un-Snapchatty route of providing some direction and pointers.

The feature getting announced today isn’t entirely new: the company started a limited release of it earlier this year. Early evidence seems to point to video doing just what LinkedIn hoped it would: so far, videos from the limited release are already getting shared 20 times more than any other content. Before that, there were other dabbles in video: last year, LinkedIn launched a Quora-style Q&A service with influencers on the site that marked its first foray into moving pictures.

Launching user-generated video is a long time coming, but for the 500 million of us who use LinkedIn, being late isn’t too much of a surprise.

LinkedIn hasn’t been known as the fastest moving of social networks over the years. Run a short Google search on the words “LinkedIn” and “finally” on TC or across the wider web and you can see the story of how it was late(r) to the party on mobile (Android, iPad and later giving more parity to the mobile and web experiences), on other advanced features for users to communicate and share news, on targeting the developing world and more.

“We have been focused on expanding the ways members can create and share professional content,” a spokesperson told me in response to my questions about why it has taken so long to launch a video product. “As we did with the ability to publish, we wanted to take a thoughtful approach to introduce video creation to the LinkedIn platform in a way that it adds to the consumption experience, and fits seamlessly with how our members post, share and discover.”

But now that the ball has gotten rolling, what is interesting to me is to consider how LinkedIn might evolve the product, and just how it could fit into what it has built and wants to develop in the future. 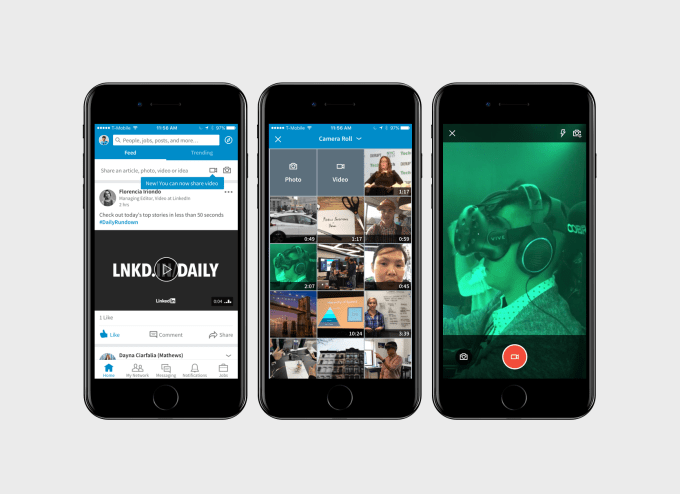 Key to that is launching live video.

Earlier this year, LinkedIn quietly hired a product manager from Facebook Live called Peter Roybal, who is heading up the video service. Roybal reports to Pete Davies, who joined LinkedIn when the company last year quietly acquired his startup Run Hop, and now oversees all of LinkedIn’s content and publishing. The fact that Roybal had been involved with FB Live — the mammoth social network’s own live broadcasting platform — is a strong sign of where LinkedIn hopes to take its own video offering.

Live video is an obvious and natural complement to what LinkedIn has already been developing on its platform in areas like education, company profile pages, recruitment and professional networking.

In education, after buying Lynda.com for $1.5 billion, LinkedIn has created a site called LinkedIn Learning, which offers online courses both for individuals and companies training their employees. It’s also been piloting a mentoring program this summer.

All of these are areas where you could imagine live video components, either providing a one-to-many broadcasting feature with text-based interactions from viewers or one-to-one video chats.

One-to-one video chats are also a no-brainer when you consider LinkedIn’s recruitment business, which has for years made up the majority of its revenues: video can be used both to help advertise businesses and open positions, as well as a tool for interviewing candidates.

(Sidenote: one area that we haven’t seen any activity at all is any link up between LinkedIn and Skype, another Microsoft business. But we’ve heard that Skype is also building a platform for interviews. Microsoft declined to comment when we asked about it, but it’s already a popular use for Skype and so it would make sense to formalize that.)

“Live video and live video chat is an interesting possibility down the road because it helps people add a whole different dimension,” the LinkedIn spokesperson said.

Other areas where LinkedIn is very likely to bring video in the near future is advertising and videos from companies on the service.

Company videos are “coming soon,” the spokesperson tells me, and a separate source notes that these videos will be hosted both on company pages as well as in other places: another feature that LinkedIn has been quietly developing has been event-style pages that let you search for specific subjects by hashtags in order to browse videos and other content related to them (here is one for #TED2017). These pages will give users one more ways to discover that video content.

Much of this, longer term, is likely to help feed into one of the biggest reasons for getting deeper into video in the first place: advertising.

As Facebook, Twitter, Snapchat, YouTube, Yahoo/AOL/Oath and others have found, video is where the money is for digital advertising today, so bringing more content around the medium overall would help LinkedIn move into video advertising more naturally, as well.

“We don’t currently serve video ads at this time. We’re focused on building a great experience and learning from our members. But this is a natural progression and something we are evaluating for the future,” the company tells me. “There aren’t plans today, but there are a lot of interesting features that we’re going to look at.”

A moving target for sure, but one that LinkedIn (and Microsoft) are now very focused on hitting.