LinkedIn, the social network for the working world with more than 500 million members that is now owned by Microsoft, is today taking its next step in its bid to court more users in emerging markets. The company has released an Android app for LinkedIn Lite, a pared-down version of its original LinkedIn mobile app that is developed for users in markets where data networks are slower and relatively more expensive for consumers, and phones are slower.

The app is live now in India, and LinkedIn says the plan will be to expand it to more than 60 more markets in the coming weeks and months.

LinkedIn says the app takes up only 1 MB of space on a device, reducing the data usage required to run LinkedIn by 80 percent; and it loads a page in less than five seconds, “even on a 2G network.” It features the LinkedIn basics, like its news feed, jobs, profile, access to your LinkedIn network, messaging, notifications, and search — but without heavy graphics and other features that might slow down page loads and eat up more of a user’s data allowance. 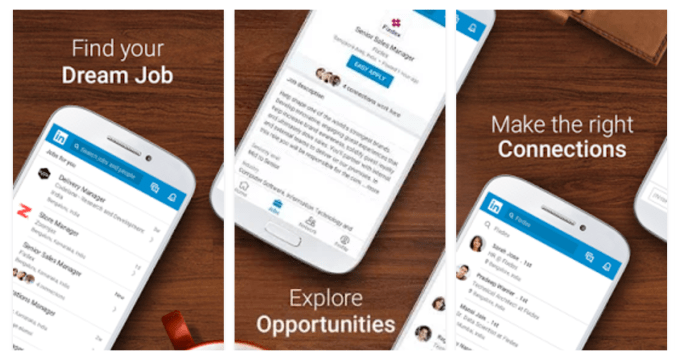 LinkedIn Lite was first launched as a mobile web site in September last year as part of a suite of new services tailored specifically for India, one of LinkedIn’s biggest emerging markets, where it currently has 42 million users.

A spokesperson confirms there are no plans currently to create an iOS app for LinkedIn Lite, which is not that surprising: Android long ago overtook iPhone when it comes to smartphone usage in developing markets. (In India, Android accounts for 97 percent of all smartphones in use.) For those who do use iPhones in those regions, there is LinkedIn Lite for the mobile web.

LinkedIn’s focus on emerging markets is a long-term effort to boost the company’s growth by tapping into new opportunities.

While LinkedIn has slowly, as part of Microsoft, been building out new tools to sharpen its focus on professionals in developed markets, it also has been building tools to increase usage of its service in emerging markets. This is part of the company’s mission to build a global “economic graph” (LinkedIn’s version of Facebook’s social graph) that links people with professions and all of the data points in-between.

Now that the social platform is a part of Microsoft, it discloses significantly less information about the progress of its business. We know that in the last quarter it contributed $975 million in revenue but no longer have visibility about monthly and daily active users and how they are growing (that’s one thing to look out for today, when Microsoft reports its Q4 earnings). Nevertheless, the trend that we were seeing at the company for some time before its sale was that growth was sluggish and at some points flat or even declining.

In that regard, focusing on newer markets — specifically the developing world and later-adopters among the global class of white-collar workers — makes a lot of sense.

In fact, it’s a pattern that other social networks have taken before to drive more growth, with the results having a direct impact on revenues.

At one point last year, Facebook Lite was Facebook’s fastest-growing app, and this year it hit 200 million users. In April, Facebook’s “rest of world” revenues (outside of North America and Europe) were up 52 percent to $839 million compared to a year ago; you can draw a line between the growth of the Lite app and the growth of Facebook’s business abroad.

Facebook is now hoping for a repeat performance with the newer Messenger Lite, an Android app that is now live in more than 100 countries, offering those of Messenger’s 1.2 billion users who either have older phones, or slower networks, or perhaps both, an easier way of connecting.

When LinkedIn Lite for mobile web made its debut last year (again, first in India), the company also launched an online test to help people find job placements, and a new set of business tools to help people build better profiles for themselves and their businesses. Providing a Lite mobile app completes that loop.

“Besides providing a fast, data-light solution for professionals in slow network areas, we hope the LinkedIn Lite app will democratize access to economic opportunity,” said Akshay Kothari, LinkedIn’s country manager for India, in a statement. Kothari originally joined the company in Silicon Valley when it acquired his news-reading app Pulse. “Regardless of their device or location, we hope to level the playing field for all LinkedIn members so they can get closer to their dream jobs, grow their networks and become more successful.”