On the heels of a major redesign of its desktop site which delivered an overall cleaner look-and-feel and a “dark mode” for nighttime watching, YouTube this week announced it will soon roll out an update to its mobile app, as well. The new app will better support video shot in other formats and orientations, by dynamically adapting its player to whatever video you’re currently watching.

As YouTube explains on its blog, “Who cares if they’re vertical or horizontal? Shot on a mobile phone or DSLR? Square, 4:3 or 16:9?”

The idea is that the software itself should adapt to play the video in the appropriate way, instead of trying to cram differently sized videos into one fixed area of the app because of technical constraints. When this functionality arrives in the weeks ahead, the YouTube player will automatically adjust when you’re watching a vertical, square or horizontal video, says YouTube.

A demo of how this will look is below:

This change is something that’s been necessitated by the shift to mobile and smartphone-shot video, where often people record what they’re seeing while holding the phone vertically – as is most comfortable.

Startups, including Snapchat and others, have capitalized on vertical video. Even Facebook said this year that it would no longer crop vertical video, which made it more like Snapchat. It was inevitable that YouTube would also figure out a way to better display differently shot video, too.

In addition to the updated YouTube Player, the company also said its new sharing feature will become available in Latin America in a couple of weeks, and then roll out throughout the U.S. The option was first introduced last year in Canada, offering a messaging-like experience directly in the YouTube app.

Instead of texting links to YouTube videos to friends, the idea is that you can start a chat session while still in YouTube. Friends can then reply with text or videos of their own, and even heart the comments they love. It wouldn’t be surprising to see YouTube expand this feature over time, to include other functionality, too – perhaps like the co-watching experience its testing today through its Uptime application.

With messaging built-in, the hope is that YouTube users – and there are now 1.5 billion logging in monthly – will increase their time spent in the app. That could keep them from more often turning to rival networks, like Twitter, Snapchat and Facebook, all of which have invested heavily in video, as well.

Through YouTube messaging, Google is aiming again to establish its footing in the social networking space where it has largely failed over the years. But it’s still challenged by the fact that a person’s Google account isn’t often associated with the same sort of social graph as you’d find on other networks like Facebook. 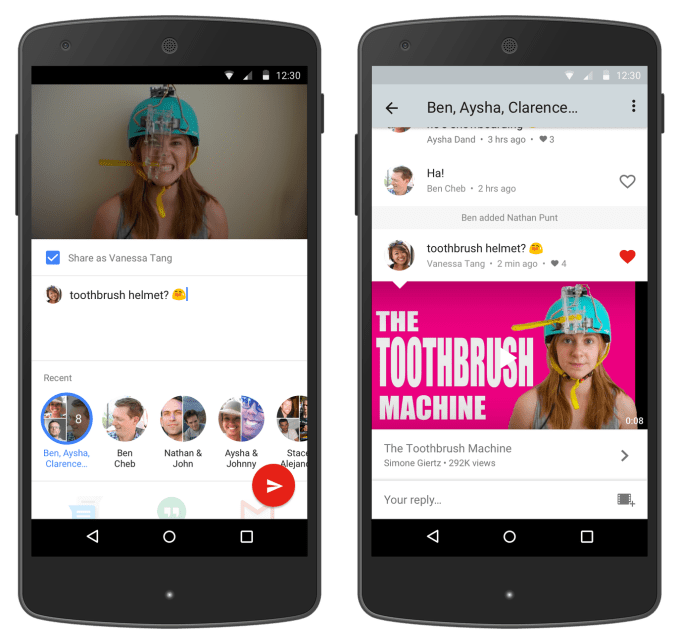 Instead, YouTube finds “friends” for you from among work colleagues and professional acquaintances you email with, and others who you don’t necessarily want to share fun videos with.

I’ve also had the problem of random people adding me to their friends list in this sharing feature, leading to a slew of friend requests I have to deny. A similar problem plagued Google+ back in the day, where any posts were instantly spammed with strangers from around the world writing things like “hi, add me” “nice to see you,” and other inane comments that added little value to the conversations.

Google needs to get a handle on establishing a real friends’ graph if it wants to succeed in social. And it may eventually need to buy one if it can’t make YouTube’s work out. Twitter, for example, would be a perfect fit with YouTube – not only do the companies offer similar video products like live streaming, YouTube introduced its own Twitter-like feature called Community that shows up on creators’ pages. And Twitter could benefit from being wrapped into Google’s search and ads businesses, of course.

But it’s clear for now that Google still thinks it can go it alone, so prepare for YouTube messaging soon.