Hot on the heels of rolling out its own version of Twitter, called Pulse, video game streaming site Twitch today announced its new desktop application, Twitch Desktop App. This is actually a rebranding of Curse App — an application Twitch acquired from the video game community and software maker Curse last year. Twitch says the now “enhanced” app will include community servers, voice and video messaging and game content distribution.

One of the larger goals with Twitch Desktop App is to give streamers’ followers a place to connect, even when the streamer is offline. It also is further representation of how Twitch is re-imagining itself as more than just a place to watch live video — it’s working to become more of a true social network. 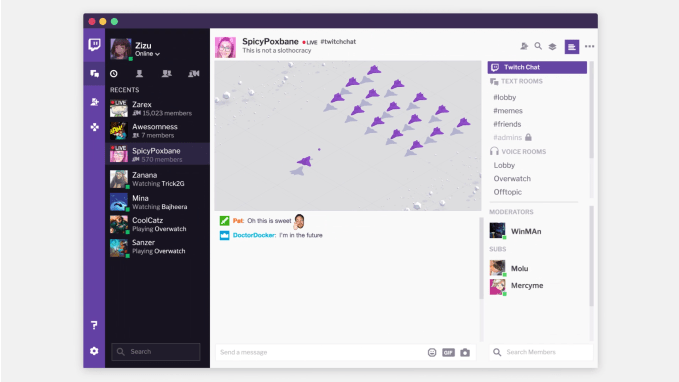 The launch, which is scheduled for March 16, 2017, follows several recent moves aimed at giving Twitch more of a social networking feel. The most notable being this week’s launch of Pulse, a Twitter-like social stream right on the homepage that lets users share updates, including text and multimedia from services like Vimeo, YouTube, Imgur and Gfycat, as well as Twitch.

The company has also rolled out other social features, like Communities, which focus on gamers’ shared interests — including those that extend beyond video games; IRL, which lets vloggers host broadcasts to directly talk with fans; and Twitch Creative, where broadcasters can show off artistic endeavors, whether or not they’re directly related to gaming.

It also has dabbled with streaming non-gaming video content, including shows from Bob Ross, Julia Child and Amazon Prime Video, and, as of March 14, it’s adding the Power Rangers to that mix with an 831-episode marathon. This will be streamed from twitch.tv/TwitchPresents, the site’s new home for its TV marathons.

Combined, these efforts are meant to give gamers a reason to stay on the site and continue to engage with its content, even when the video game streams they came to see have ended.

As part of its rebranding of the Curse app, Twitch says it kept its popular features, like screen sharing, voice and video calling and community server creation.

It then added Twitch’s own feature set on top, including its social offerings. This includes Friends, Whispers (private chat) and activity sharing (to see when friends are streaming, what they’re watching or playing a game). 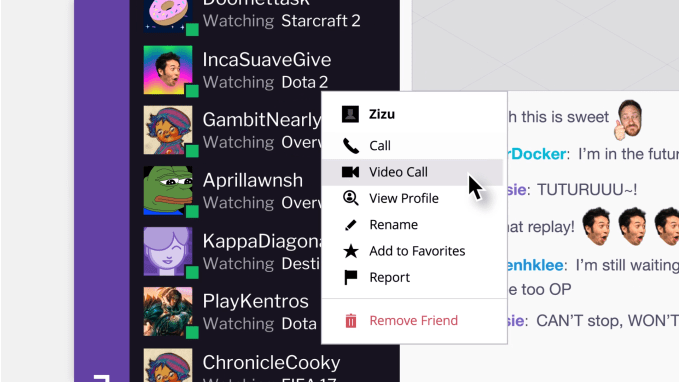 The app will also later offer the ability to download game purchases from Twitch, when game sales go live later this spring — Twitch’s new e-commerce push, announced in February. The desktop application will serve as a game library for these purchases, as well as a place for add-ons and mods that automatically update.

This the first major Curse-related announcement since Amazon-owned Twitch acquired Curse last year. Twitch was interested in Curse for several reasons: its TeamSpeak competitor that’s the above-mentioned Curse app, as well as its sizable video game communities, which overlapped quite a bit with Twitch’s own.

When the new Twitch Desktop App launches into beta later this month, it will be available from download.twitch.tv.